HOW CHEMISTRY CREATES A PHOTOGRAPH (Jul, 1946) 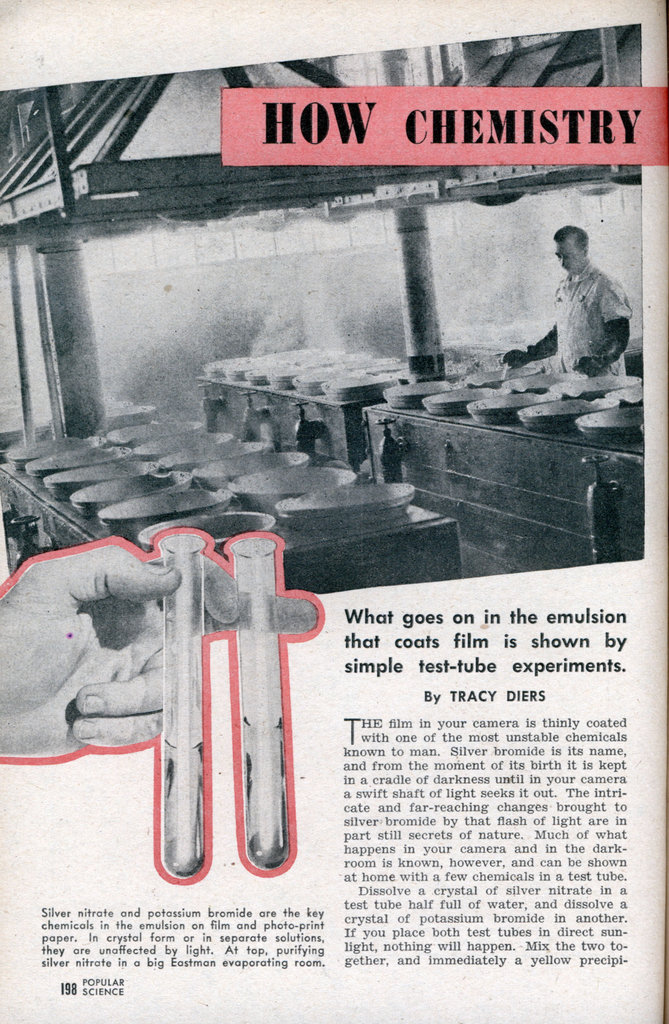 HOW CHEMISTRY CREATES A PHOTOGRAPH

What goes on in the emulsion that coats film is shown by simple test-tube experiments.

THE film in your camera is thinly coated with one of the most unstable chemicals known to man. Silver bromide is its name, and from the moment of its birth it is kept in a cradle of darkness until in your camera a swift shaft of light seeks it out. The intricate and far-reaching changes brought to silver bromide by that flash of light are in part still secrets of nature. Much of what happens in your camera and in the darkroom is known, however, and can be shown at home with a few chemicals in a test tube.

Dissolve a crystal of silver nitrate in a test tube half full of water, and dissolve a crystal of potassium bromide in another. If you place both test tubes in direct sunlight, nothing will happen. Mix the two together, and immediately a yellow precipitate of silver bromide falls to the bottom of the tube. Expose this to strong sunlight or to a photoflood bulb, and it will immediately turn purple. This purplish-colored material is chemically pure silver, freed from the bromine it was formerly attached to. You might say that the reaction was this: Silver bromide plus light equals silver plus bromine. The latter goes off as a gas.

Since it isn’t practicable to coat films or paper with a lumpy precipitate, we had to invent some method of spreading the chemical evenly and thinly over the surface we wished to sensitize. The answer was to suspend the silver bromide in an emulsion. Dissolve, with gentle heating, 20 grains of household gelatin in a test tube half full of water. Add a pinch of potassium bromide and then pour in a dilute silver nitrate solution. Silver bromide is again formed, but this time it remains evenly suspended.

In photography the action of the silver bromide is speeded and intensified by the use of a developer. Stock developing solutions consist of a developing agent such as pyro or hydroquinone, an alkali such as sodium carbonate or borax, a little potassium bromide as a restrainer, and some sodium sulphite as a preservative. To show how a developer works, put several drops of any stock developer solution in a flask of silver bromide emulsion that has been exposed only briefly, and not sufficiently to turn dark. The emulsion now turns black in a few secondsâ€”much faster than when light does all the work of separating the silver.

On exposed film, you would now see an image consisting of dark areas of metallic silver and light areas of unexposed silver bromide that the developer has not affected. A fixing bath is next needed to keep these light areas from darkening upon subsequent exposure to light, for if they did the entire negative would turn black and the image would be lost. The fixing bath is sodium thipsulphate, the hypo familiar to every photographer.

You can see how it works by dissolving a few small crystals of sodium thiosulphate in water in a test tube and pouring the solution into half a test tube of unexposed silver bromide emulsion. Immediately the yellow suspension disappears, and the tube con-tains a clear, transparent liquid.

What happens is this. Sodium thiosul-phate reacts with silver bromide to form silver thiosulphate, a clear solution; then, if there is plenty of fresh hypo present, the reaction continues, forming complex salts that are dissolved by the remaining hypo.

A simple taste test illustrates the point. Fresh hypo has a salty, bitter taste, and silver sodium thiosulphate is almost as sweet as sugar. Dip a sheet of ordinary writing paper in a solution of 1 oz. of hypo and 4 oz. of water, rinse it in water for a moment, and taste the salty hypo remaining. Then dip a small piece of enlarging paper in the hypo for a few seconds, rinse it quickly, and taste the sweet emulsion side. Return the enlarging paper to the hypo for a few minutes longer, remove and rinse it, and you taste the salty hypo again. Expert photographers avoid stale hypo so that the reaction, or fixing, will be complete and no silver sodium thiosulphate will remain.

Every photographer has taken negatives that were too light or too dense to afford good prints. Too light an image may be due to underexposure in the camera, or underdevelopment in the darkroom. A negative of this kind can sometimes be salvaged by intensification. Too dark a negative can be improved by reduction.

To show the action of a common reducer, first prepare half a test tube of silver bromide emulsion, expose it, develop with a few drops of stock developer, and add four or five drops of glacial acetic acid (the photographer’s short stop) to halt development. Then add 6 cc. of hypo solution. To the dark emulsion you now have, slowly add a reducing solution consisting of 25 grains of potassium ferricyanide in 1 oz. of water. Watch the dark silver particles lighten as they are changed into silver ferrocyanide and in that form are dissolved by the hypo. This is the well-known Farmer’s reducer.

A common method of intensification is to combine the silver deposits of the negative with some denser metal such as chromium or mercury. To show how a typical intensi-fier works, first make up the usual emulsion, expose, and develop it as before. Add a few drops of glacial acetic acid short stop. Oddly enough, the first step in intensification is bleaching. Add 20 grains of mercuric chloride to 1 oz. of water and pour in enough of this solution to bleach out completely the black metallic silver, which in the process is converted into white silver chloride.

On a negative, the image seems lost at this step. It is brought back by redevelopment. To your bleached test-tube emulsion, add a little ordinary ammonia water. The emulsion becomes even blacker than it was before; it has been intensified. The new blacker chemical is a very complex salt, silver mercury ammonium chloride.

The process of toning photographs, in which the black areas are converted to sepia or some other color, also may involve bleaching and redevelopment. Prepare the usual small quantity of emulsion and develop it after exposure. Add the acetic acid short stop. Then prepare a small flask of bleaching solution consisting of 110 grains of potassium ferricyanide, 110 grains of potassium bromide, and 2 oz. of water. Also dissolve separately in a test tube 50 grains of sodium sulphide in 2 oz. of water. This is the redeveloper.

Pour some bleaching solution into the developed emulsion. The black silver particles are quickly bleached out into a yellowish substance. The silver first becomes silver ferrocyanide and then silver bromide.

Now pour in some of the redeveloper and at once the emulsion turns brownâ€”in a photo, sepia toning would have resulted. The sodium sulphide in the redeveloper has changed the silver bromide to silver sulphide, the compound that appears as tarnish on silverware, and this is the sepia tone.