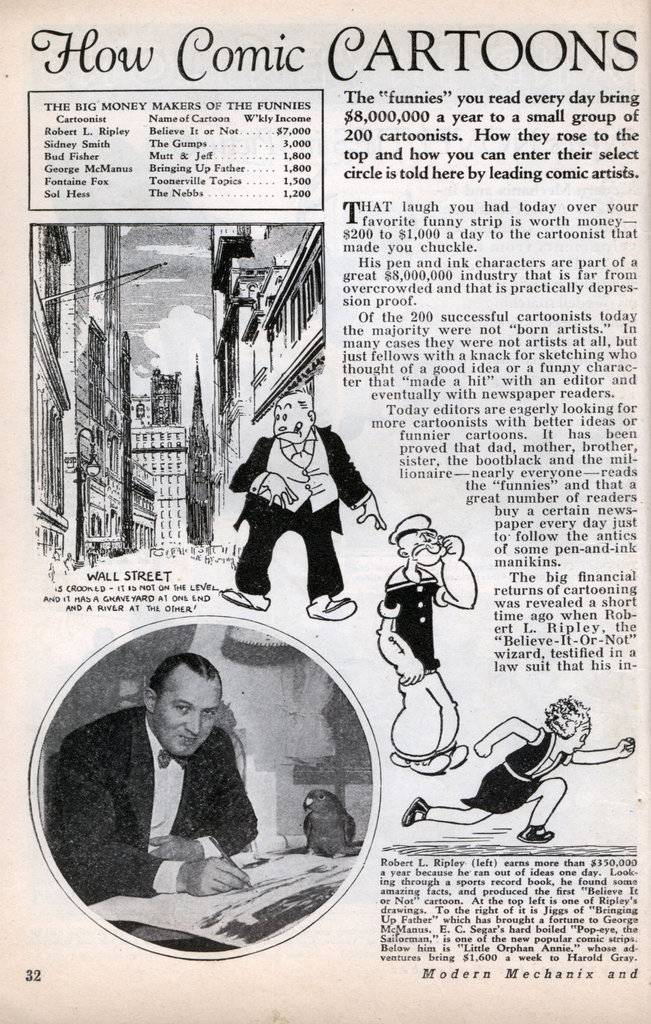 Today editors are eagerly looking for more cartoonists with better ideas or funnier cartoons. It has been proved that dad, mother, brother, sister, the bootblack and the millionaireâ€” nearly everyoneâ€”reads the “funnies” and that a great number of readers buy a certain newspaper every day just to follow the antics of some pen-and-ink manikins.

The big financial returns of cartooning was revealed a short time ago when Robert L. Ripley, the “Believe-It-Or-Not” wizard, testified in a law suit that his income from his drawings averaged from $6,000 to $7,000 a week. That statement surprised many people and immediately afterward there was an epidemic of “Believe It or Not” imitators. The figure quoted by Ripley also showed that he was the biggest “money man” of the cartooning industry. As a boy Ripley had a talent for drawing, but his ambition in life was to be a big league baseball player. At 14 he sold his first cartoon, “The Village Belle Was Slowly Ringing,” depicting a country girl turning a clothes wringer. But he concentrated on baseball so successfully that he was signed up as a “rookie” pitcher with John McGraw’s major league New York Giants. The first day he wore a Giants’ uniform he broke his arm and his baseball career came to end.

Eventually he succeeded in joining the art staff of the San Francisco Bulletin as a sports cartoonist. Ripley admitted his drawings were not very good and his mother tried to urge him to learn a trade.

In a few years Ripley moved to New York where J. R. Darling (Ding), famous cartoonist, hired him as a sports artist on the New York Evening Globe. One day in 1921 Ripley found himself without an idea for a cartoon. He dug into sports record books, found some amazing performances, pictured them and turned them over to the chief of the art staff. The title “Believe It or Not” was put on the drawing.

The cartoon proved so popular that he had to continue the “Believe It or Not” drawings daily. Other papers in different cities wanted the cartoons and Ripley became a syndicate cartoonist with a rapidly increasing income. In 1929 he signed a contract with William Randolph Hearst’s King Features syndicate. His drawings now appear in more than 250 newspapers in the United States, Canada, and twenty-two foreign countries. During 1932 Ripley traveled 60,000 miles and this year 30,000 miles seeking the unusual facts he pictures daily. To date he has visited 151 different countries.

Ripley, though, does not draw “funnies.” Of the comic strip type of cartoonist, Sidney Smith, creator of the buffooning Andy Gump, George McManus and his “Bringing Up Father,” and Bud Fisher with “Mutt and Jeff” easily are at the top. These three earn about $2,000 a week from their daily strips and possibly $1,000 more from other sources that use their comic characters. Last year Sidney Smith, Chicago Tribune newspaper syndicate’s ace cartoonist, earned $150,000 from the Gump family’s adventures.

Last year was the worst year of the depression but it affected cartooning very little compared to other industries. Why? Because editors wanted more and more “funnies” to cheer people and help them forget their troubles.

The depression brought fortunes to several cartoonists. The adventurous exploits of Dick Tracy, square-jawed detective character created by Chester Gould, pitched the obscure Gould straight on his way into the $50,000-a-year class, within the short period of six months.

Rube Goldberg, leading cartoonist of the McNaught Syndicate whose looney inventions make thousands laugh, also found more income during the depression. He started a new comic strip called “That’s Life” that has become popular. Goldberg, by the way, started out to be a mining engineer. E. G. Segar’s jaw smashing “Pop-Eye” and Phil Nowlan’s and Dick Calkins’ “Buck Rogers,” and Percy Crosby’s “Skippy’ have also made great strides in the last two or three years.

These and other “funnies” have grown during the depression, but the old stand-bys, tried by many years of wear and tear, have clung to the top as popular as ever. Bud Fisher’s “Mutt and Jeff,” whose daily adventures are distributed by the Bell Syndicate, is still a great money maker. These two characters are the veterans of funnyland. Andy Gump first saw the light of the printed page in 1917, but Mutt and Jeff made their debut in 1909.

Another type of cartooning is the animated funnies of the movies, now equipped with voices and music just like all “talkies.” Walt Disney, who has taken a mouse as his leading man and made “Mickey Mouse” a big hit throughout the world, is the leader of this field. His annual income, it is said, reaches astronomical figures. “Mickey Mouse” is also syndicated in daily newspapers by Walt Disney Enterprises.

Where do these expert comic masters who earn such big fortunes come from? How does one go about getting into this select golden circle?

You must have the knack or talent to draw cartoons, of course. Schools specialize in the art and turn out successful graduates. But there are thousands of cartoonists all over the country who are not making fortunes.

Then how does one get into this big money class? Grant Powers, well known New York sports cartoonist, supplied the answer.

“An art school education or training in a school which majors in cartooning can do no harm,” he said. “It may be of tremendous benefit in giving you the technique to polish up your natural talents. “But I have known cartoonists with no previous training to volunteer to work for nothing so that they might assist their idols in lettering in balloonsâ€”which is the dialogueâ€”or the background after the artist has done the principal work of the strip.

“Once you have made this contact, or obtained some other work in an office where Cartoonists are at work, you must be very patient as sometimes months and years may foil by and the rainbow’s end still be remote. But sooner or later every understudy gets his opportunity. Most conspicuous of these is the case of the man who inherited the ‘Mr. and Mrs.’ strip after the immortal Clare Briggs, its mentor, died. That feature continued running, uninterrupted by the passing of its creator, simply because there was a pinch-hitter on hand to carry on the work.

“When you have gained entree to a newspaper, you are quite likely to find that the sporting department can use a good feature from you once a week, preferably Sunday. At first it might be crude, finding appeal only in the fundamental fact that it is a cartoon. But if you’ve got the stuff, it will improveâ€”or die.

“If you’ve got something unique, the publisher will ask you to make it a daily feature. If it goes over big as a daily feature, it will get abroad that you are producing something worthy of national recognition.

“At this point you make your first acquaintance with the syndicates, organizations which take your original product and have it reproduced several hundred times. They then sell the matsâ€”a sort of paper mould from which plates are made in the newspaper’s stereotyping plantâ€”to client papers throughout the country.

“This is what is called in the craft as being on ‘Easy Street.’ You sit in your studio and turn out your copy, send it t