How Disney Combines Living Actors with His Cartoon Characters (Sep, 1944) 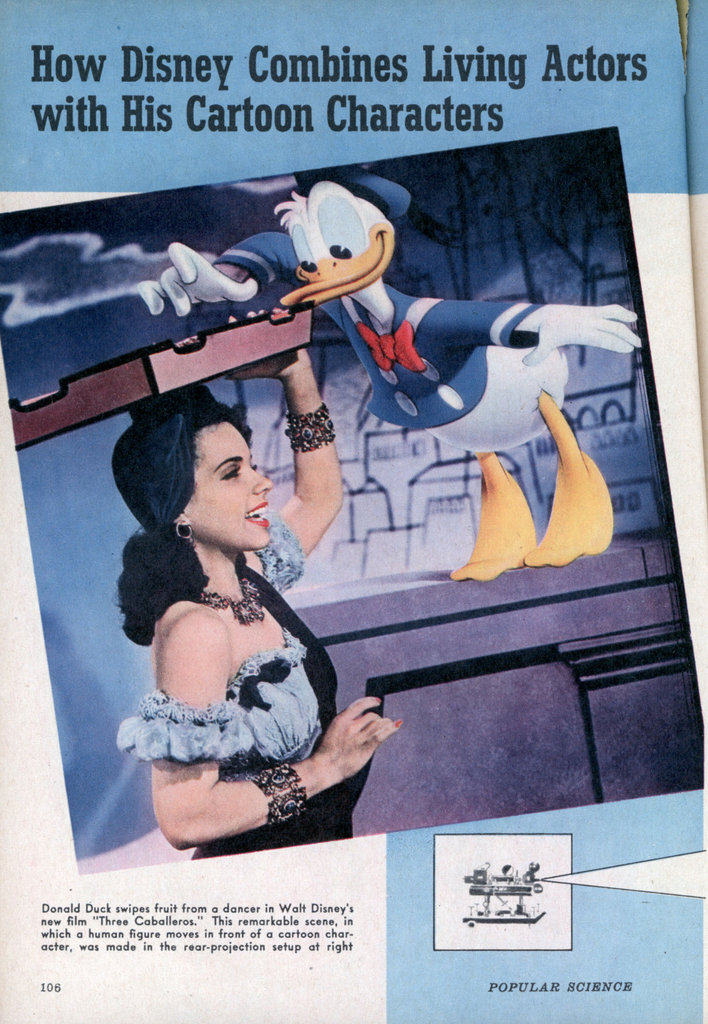 How Disney Combines Living Actors with His Cartoon Characters

UP GOES another character in the Walt Disney Hall of Fame. Out comes another surprise from the Disney bag of tricks. To be specific, Panchito, a Mexican rooster with as much personality as Donald Duck or Joe Carioca, is making his first appearance; and on the screen with him will be live, three-dimensional actors.

The new film is “Three Caballeros,” a full-length fantasy of Mexico and points to the south. No one will fail to recognize this as a good-neighbor film, but, while Joe Carioca. the parrot of “Saludos Amigos,” typified Brazil, or the Portuguese-speaking part of South America, Panchito leans definitely toward the Spanish side.

Second only to the spell of Disney’s propaganda fantasy will be the inevitable reaction of the thousands who will exclaim, “How on earth is it done?” It isn’t too simple. The film involved the most careful planning all along the line, beginning with the conception of the character. Then came his visualization in the studio, checking up on his background, andâ€”a most important considerationâ€”his color scheme. Panchito must not clash with the blue, white, and yellow of Donald Duck, nor the green, cream, yellow, and vermilion of Joe Carioca. He must be individual and also look well against the many backgrounds. The studio settled the matter by giving Panchito a yellow beak and feet, red comb, gray hat, and purple outfit. After this, it was a good deal of a chore to find a voice that would make Panchito suitably articulate on the screen. From more than 100 actors tested, they selected Joaquin Garay, an entertainer in San Francisco’s Copacabana night club, to speak the rooster’s lines.

When such preliminaries have been settled, and layouts, after many conferences, have been approved, the background artists get the “go” -signal. They must turn out flat water colors and also oil paintings on glass for use on the multiplane crane, the device that makes it possible for the camera to give proper distance values to the completed picture. At the same time, the animators get busy. They work in front of mirrors and make faces at themselves, seeking to capture in their pictures the expressions that they wish their characters to register.

There are other headaches connected with making a picture of this sort. Ward Kimball, who animated Panchito, not only interpreted the scenes as an actor would, but

he acted them out after studying a chart that analyzed the details. These included previously recorded dialogue in terms of single frames of film, the length of each word, the intervals between words, the vowel and consonant sounds, accents, inhalations, and exhalations. If Panchito says “Hello,” and the cutting department has indicated that the recorded word occupies eight frames of film, Kimball must produce eight drawings in sequence in which the character’s lips move to form the word. An assistant cleans up the rough drawings by tracing over a ground glass illuminated from below, condensing the sketchy lines into definite, single lines. Later these are traced by trained girl artists onto transparent celluloid, after which scores of girls ink the characters in lines of various thicknesses and colors.

After the inking, the “cels,” as they call the celluloid sheets, go to the painters, who fill in between the lines with carefully matched transparent paints. Disney maintains 1,000 compounded color formulas, of which 200 are used in “Three Caballeros.” Approximately 150 gallons of paint go into the making of a feature; and the colors cost $5 a pint.

Panchito’s antics. In a soundproofed, air-conditioned room he was placed on the top level of a multiplane crane, a series of transparent movable platforms, or levels, fixed to four steel posts. Panchito’s cel was held firmly by means of pegs against the topmost glass. Below him, at appropriate distances, there were four parts of the background scene oil-painted on glass. Now, riding his magic serape on an aerial tour of Bahia, Brazil, Panchito glides swiftly westward as the clouds forming the distant background float eastward. Peering straight down from its position above the crane, a Technicolor camera recorded the scene in stop-motion, thus obtaining the effect of smooth flight.

The multiplane crane and camera produce and record only cartoon action, yet on the screen you will witness scenes showing Panchito, Donald, and Joe moving across and up and down stage among real live singers, dancers, and actors, at times appearing to merge with the humans. This cartoon-over-live-action effect was achieved through a further development of the “process projection” already used by all major studios to place actors in front of previously filmed backgrounds. Disney’s small projection outfit could place cartoon characters in the foreground, but live actors couldn’t perform before a screen about twice the size of this magazine, and so several crews got busy on large-scale projection. Music and songs were recorded, and the cartoon action was timed to fit them. Optical experts designed and ground special quartz lenses to deliver maximum light from the projector. The sound crew set up a translucent plastic screen measuring 14 by 20 feet, placed the projector 50 feet distant on one side and the camera 25 feet away on the opposite side. The arrangement provided for the living actor to perform on the stage in front of the projected action of the cartoon, and for the Technicolor camera to record both. Disney then shot the first combination sequence, a close-up of Donald Duck stealing fruit from a tray carried by Aurora Miranda as she walks by in the foreground. Aurora’s songs, Panchito’s comments, Donald’s chatter are all parts of the picture, but these scenes are shot silent and the lip movements synchronized to sounds recorded earlier. One of the more outstanding qualities of the Disney picturesâ€”apparently effortless productionâ€”hangs in the balance as “Three Caballeros” comes to the screen. Will mystification outweigh story interest; or will Disney’s genius make plausible the mingling of animated pictures with equally lively people?

Our Hero Takes On Life

calls for self-analysis. Animator Ward Kimball makes faces at himself in a mirror to get the expressions he wants his character to register. After artistic facility, one requisite for the job of animator is the ability to act. If Pan-chito says “Hello,” Kimball must produce eight drawings in sequence showing his lip motions in pronouncing it

is a necessary follow-up of the first animation. The originals are placed on a ground glass, which is illuminated from beneath it, and experienced artists clean up the drawings by condensing the rough lines into definite single lines. Later on, these drawings are traced by girl artists onto sheets of celluloid

3 INKING IN THE LINES

in various thicknesses and colors is the next step. This helps develop the character and preserve the individuality expressed by the animator. The lines must match exactly, for they will be multiplied in length and width when projected onto the screen. One scene may require several thousand of the inked cels, all made with precision

is the exacting task of clever girl artists using paints that are carefully matched with previously set standards to make sure that each character will look the same throughout the picture. Approximately 150 gallons of paint and 200 different colors go into the making of a picture. The paint costs $5 a pint