Apparently Einstein’s work hadn’t really sunk in yet. It’s the acceleration, not the speed that gets you. 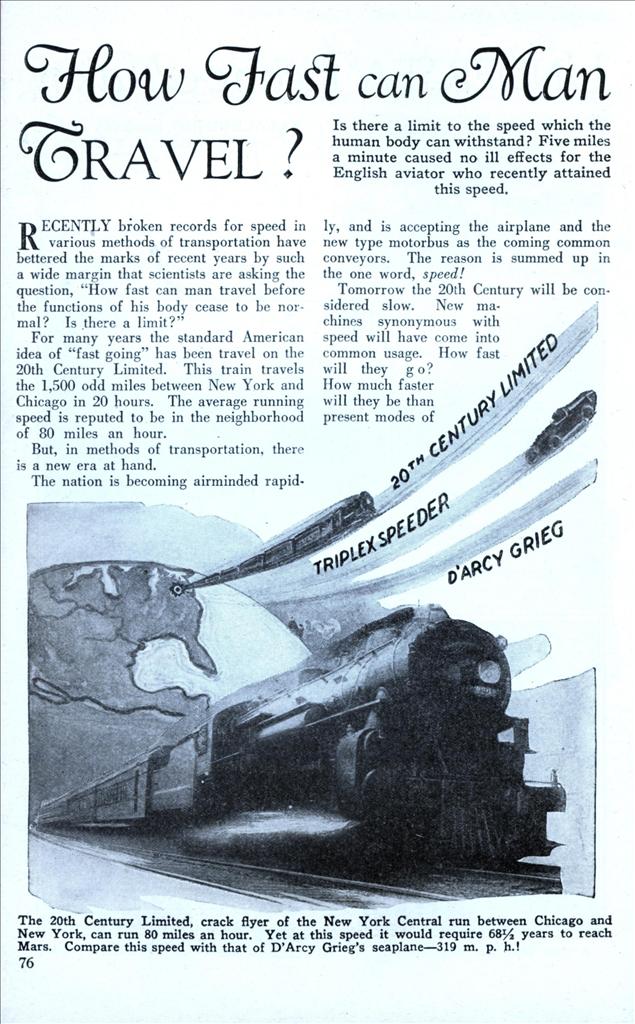 How Fast can Man Travel?

Is there a limit to the speed which the human body can withstand? Five miles a minute caused no ill effects for the English aviator who recently attained this speed.

RECENTLY broken records for speed in various methods of transportation have bettered the marks of recent years by such a wide margin that scientists are asking the question, “How fast can man travel before the functions of his body cease to be normal? Is there a limit?”

For many years the standard American idea of “fast going” has been travel on the 20th Century Limited. This train travels the 1,500 odd miles between New York and Chicago in 20 hours. The average running speed is reputed to be in the neighborhood of 80 miles an hour.

But, in methods of transportation, there is a new era at hand.

The nation is becoming airminded rapidly, and is accepting the airplane and the new type motorbus as the coming common conveyors. The reason is summed up in the one word, speed!

Tomorrow the 20th Century will be considered slow. New machines synonymous with speed will have come into common usage. How fast will they go? How much faster will they be than present modes of travel? And how much of the speed which these machines have at their command can be utilized for moving human beings?

That is the purpose of recent speed trials in which new automotive and aeronautical records have been shattered. Much has been learned.

For instance, the recent rivalry for the world’s automobile speed record between Malcolm Campbell, Frank Lockhart, and J. M. White produced the knowledge that man can travel at 211 miles an hour without suffering any ill effects. Neither nausea, faintness, nor mental aberration were noticed. It has been assumed that most normal human beings could travel comfortably at such speeds for prolonged periods without suffering.