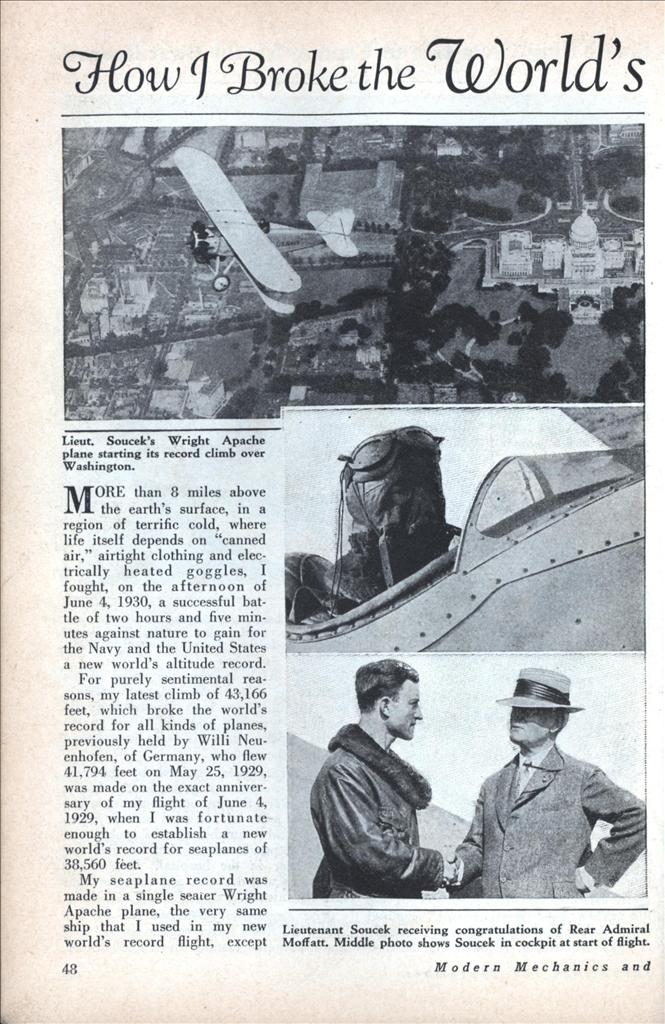 How I Broke the World’s Altitude Record

On June 4, 1930, Lieut. Soucek flew a Navy plane to a height of more than eight miles to establish a new altitude record. Here he tells his story of his thrilling ascent to the roof of the world.

MORE than 8 miles above the earth’s surface, in a region of terrific cold, where life itself depends on “canned air,” airtight clothing and electrically heated goggles, I fought, on the afternoon of June 4, 1930, a successful battle of two hours and five minutes against nature to gain for the Navy and the United States a new world’s altitude record.

For purely sentimental reasons, my latest climb of 43,166 feet, which broke the world’s record for all kinds of planes, previously held by Willi Neuenhofen, of Germany, who flew 41,794 feet on May 25, 1929, was made on the exact anniversary of my flight of June 4, 1929, when I was fortunate enough to establish a new world’s record for seaplanes of 38,560 feet.

My seaplane record was made in a single sealer Wright Apache plane, the very same ship that I used in my new world’s record flight, except that in the former case it was equipped with pontoons instead of wheels. Moreover, I also used this plane on May* 8, 1929 when I established a world’s record for all types of planes by reaching an official altitude of 39,140 feet, the mark which Neuenhofen broke only 17 days later.

Certainly the afternoon of June 4 seemed almost ideal for my climb. True, the temperature near the ground was well over 90 degrees, and the air a few hundred feet off the ground appeared somewhat hazy, but these factors were not important enough, as I found later, to interfere with flying conditions at great altitudes.

Just a few words about the equipment I used and we’re off! I wore, as usual, a fur-lined leather suit, but nary a stitch of underclothes, the fur being next to my skin. Commander Frederick Ceres, flight surgeon at the Naval Air Station at Anacostia, D. C, figured this one out from the clothes of the Eskimos.

Of course, I also wore a heavy helmet, a pair of heavy, wool-lined boots, and a pair of electrically heated goggles especially devised by my brother, Zeus, recently resigned from the Navy. But probably the most interesting contraption of all was the so-called “artificial lung” which I developed, with the aid of some loyal coworkers, to aid me in getting the right amount of oxygen at high altitudes. By long experience I had learned that at 40,000 feet or higher the pressure of the air is much less than the pressure in the pilot’s lungs, with the result that when the oxygen from the ordinary type of oxygen feeding device flows into his mouth, his lung pressure tends to force it right out again. So not long ago I extended the breath outlet tube a couple of feet and then sewed the bottom onto my control stick. The point is to build up’ a pressure in this tube equal to the pressure in my lungs, so that the incoming oxygen, instead of being forced out of my mouth again, will enter my lungs properly.

However, this tube has to be opened quite often, so as to let the poison air out. Some weeks ago, while making a test altitude flight of around 35,000 feet, I forgot to release my grip on the tube with the result that almost immediately it became very difficult for me to breathe. In fact, the pressure on this tube became so pronounced that it actually blew the breath out of the corners of my mouth so that I could see it freeze!

Of course, I released the tube, but it did not open. The inner sides had frozen together where it pressed flat. However, I somehow managed to jiggle it around and break it loose until it worked.

Now, for the actual flight! The time was exactly 2:18 when everything was in readiness and I finally did take off, sweating under the tremendous burden of my heavy equipment. On this particular June afternoon the wind out of the west was not so very different from the speed of the plane, so that I simply pulled back the control stick and then went straight up in the air until I reached the “ceiling,” or maximum height of the plane.

Just a few words, however, about my immediate problems while so doing. All I had to do was to continually hold the throttle and supercharger levers open with one hand, and work the stick, oxygen valve, oxygen “lung” outlet and a couple of other gadgets with the other.

Meantime, of course, I had to use my feet on the rudder, too, and keep a watchful eye on the flight instruments. Easily the worst thing of all is to hold all the levers open at the proper ‘ times. However, they are equipped with a strong spring so that should I pass out from lack of oxygen, then the throttle would automatically close and the supercharger be cut off.

In such case the plane probably would go into a dive, but I would likely revive soon, and no harm would be done. However, if the motor happened to be left running wide open during the dive, then it would soon tear everything to pieces.

Holding these levers open is something like holding down for a long time on the clutch of an auto. For over an hour I had to push with my left arm without letting up, and my arm got mighty tired.

After nearly an hour of climbing straight up from the Anacostia Naval Air Station I leached, according to my altimeter, an indicated height of 41,500 feet, a point where the ship no longer seemed to be climbing a trifle. Instead it appeared to be hanging motionless on its roaring propeller while powerful superchargers shrieked as they sucked and pumped the thin air into a density sufficient to keep the straining engine working.

For about 20 minutes thereafter I kept the plane’s nose pointed straight up, and the engine wide open in an effort to gain a few more precious feet. During this time the needle fluctuated and at times swung past the 42,000 mark, but I couldn’t get it to stay there.

Maybe I could have achieved more altitude, but I realized, glancing at my gasoline gauge, that the effort would be futile, for I actually had barely two gallons of gas left in my tank when I finally did land around 4:30 o’clock.

Fortunately I did not suffer greatly from the effects of the extreme altitude and bitter cold (about 76 degrees F). However, at one time the oxygen tube through which I breathed filled with ice and I was forced to beat the tube against the fuselage and to shake the accumulation out in order to continue breathing.