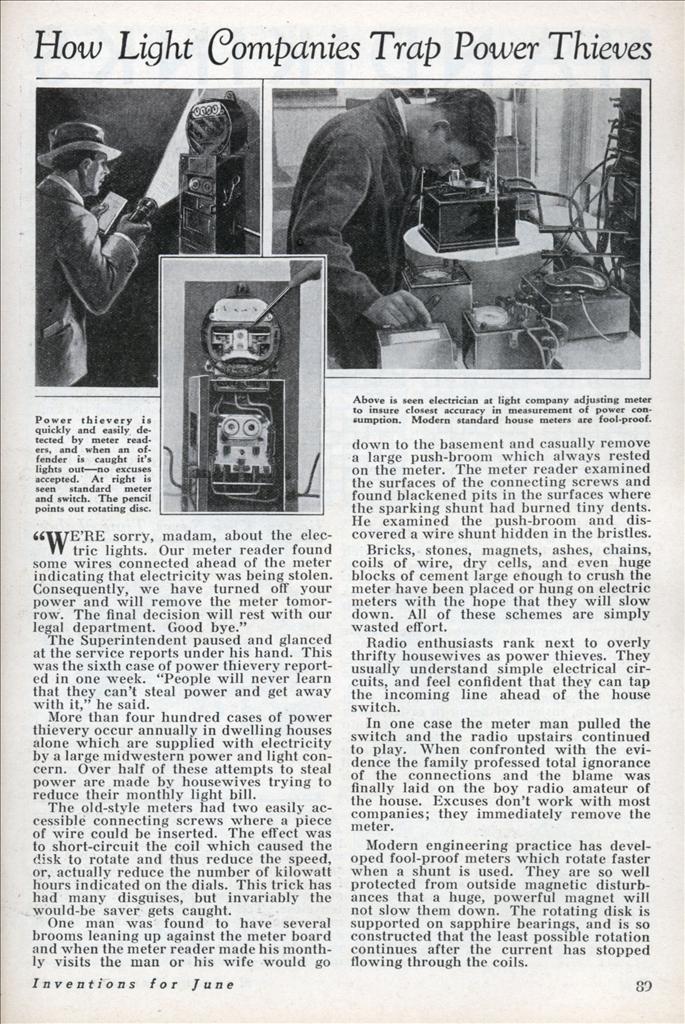 WE’RE sorry, madam, about the electric lights. Our meter reader found some wires connected ahead of the meter indicating that electricity was being stolen. Consequently, we have turned off your power and will remove the meter tomorrow. The final decision will rest with our legal department. Good bye.”

The Superintendent paused and glanced at the service reports under his hand. This was the sixth case of power thievery reported in one week. “People will never learn that they can’t steal power and get away with it, ” he said.

More than four hundred cases of power thievery occur annually in dwelling houses alone which are supplied with electricity by a large midwestern power and light concern. Over half of these attempts to steal power are made by housewives trying to reduce their monthly light bill.

The old-style meters had two easily accessible connecting screws where a piece of wire could be inserted. The effect was to short-circuit the coil which caused the disk to rotate and thus reduce the speed, or, actually reduce the number of kilowatt hours indicated on the dials. This trick has had many disguises, but invariably the would-be saver gets caught.

One man was found to have several brooms leaning up against the meter board and when the meter reader made his monthly visits the man or his wife would go down to the basement and casually remove a large push-broom which always rested on the meter. The meter reader examined the surfaces of the connecting screws and found blackened pits in the surfaces where the sparking shunt had burned tiny dents. He examined the push-broom and discovered a wire shunt hidden in the bristles.

Bricks, stones, magnets, ashes, chains, coils of wire, dry cells, and even huge blocks of cement large enough to crush the meter have been placed or hung on electric meters with the hope that they will slow down. All of these schemes are simply wasted effort.

Radio enthusiasts rank next to overly thrifty housewives as power thieves. They usually understand simple electrical circuits, and feel confident that they can tap the incoming line ahead of the house switch.

In one case the meter man pulled the switch and the radio upstairs continued to play. When confronted with the evidence the family professed total ignorance of the connections and the blame was finally laid on the boy radio amateur of the house. Excuses don’t work with most companies; they immediately remove the meter.

Modern engineering practice has developed fool-proof meters which rotate faster when a shunt is used. They are so well protected from outside magnetic disturbances that a huge, powerful magnet will not slow them down. The rotating disk is supported on sapphire bearings, and is so constructed that the least possible rotation continues after the current has stopped flowing through the coils.