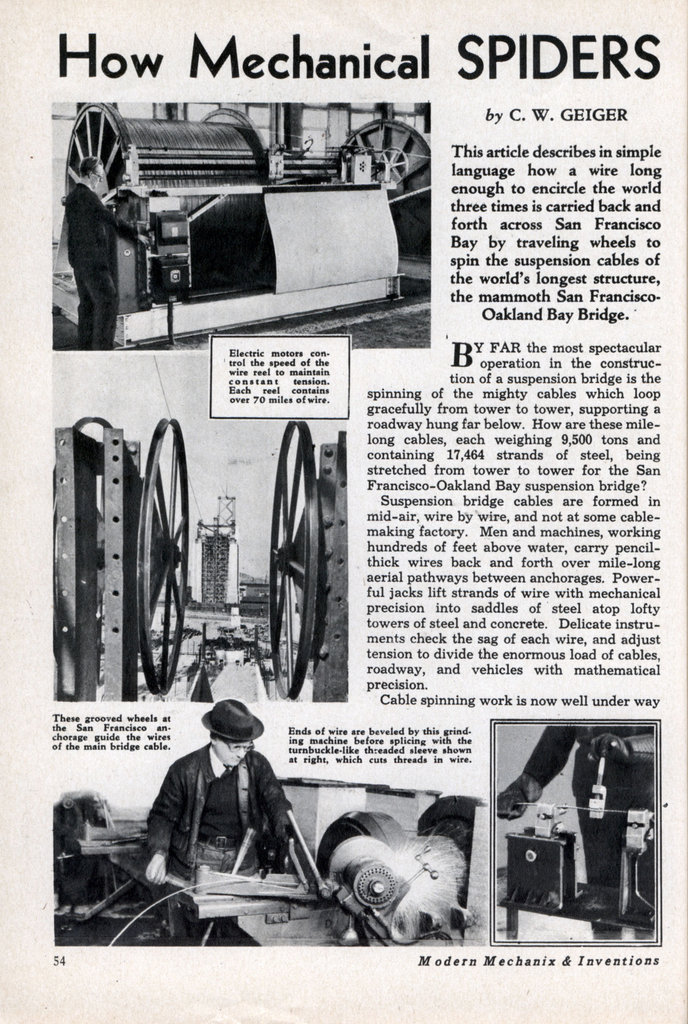 This article describes in simple language how a wire long enough to encircle the world three times is carried back and forth across San Francisco Bay by traveling wheels to spin the suspension cables of the world’s longest structure, the mammoth San Francisco-Oakland Bay Bridge.

BY FAR the most spectacular operation in the construction of a suspension bridge is the spinning of the mighty cables which loop gracefully from tower to tower, supporting a roadway hung far below. How are these mile-long cables, each weighing 9,500 tons and containing 17,464 strands of steel, being stretched from tower to tower for the San Francisco-Oakland Bay suspension bridge?

Suspension bridge cables are formed in mid-air, wire by wire, and not at some cable-making factory. Men and machines, working hundreds of feet above water, carry pencil-thick wires back and forth over mile-long aerial pathways between anchorages. Powerful jacks lift strands of wire with mechanical precision into saddles of steel atop lofty towers of steel and concrete. Delicate instruments check the sag of each wire, and adjust tension to divide the enormous load of cables, roadway, and vehicles with mathematical precision.

Cable spinning work is now well under way on the San Francisco-Oakland Bay bridge and on New York City’s great Triborough suspension bridge. It is scheduled to start shortly on the Golden Gate bridge, greatest suspension span in the world. The following description of cable spinning work on the San Francisco-Oakland Bay bridge will apply as well to the other bridges, even though minor details and cable specifications are different.

There are in reality two separate suspension spans in the Bay bridge, one from San Francisco proper to a massive concrete center anchorage in the bay, and the other from this anchorage to rocky Yerba Buena Island.

The greatest difference in the two Bay bridge spans lies in the method of constructing the cable roots or anchorages. At Yerba Buena the cables end at eye bars set into a concrete-filled tunnel leading far back into the solid rock of the island. At the San Francisco end, however, a 150-foot high block of concrete resists the cable pull by sheer bulk of weight. At this end, too, is the “clothesline prop”â€”a short tower of concrete which props up the cables, permitting the anchorage to be set farther back, on more solid ground. The cables on this half of the span are therefore considerably longer.

Before any suspension cables can be formed or spun, it is necessary to build catwalks-aerial sidewalks suspended between the towers a few feet below the final positions of the bridge cables. Workmen and inspectors cross the bay on these aerial roadways many months before completion of the bridge proper.

Four steel cables, each 2-1/4 inches thick, are laid at the bottom of the bay between towers by barges. While water traffic is halted, these cables are hoisted to the tower tops and placed in steel saddles. Each must be adjusted carefully to the required length and sag, corrections being made for wind and temperature as necessary.

On these four cables are laid timber cross beams, a coarse chain link screen, and finally a wire screen with 1/2-inch square meshes which will catch nuts, bolts, or tools which might be dropped accidentally by workmen. Sections of this walk are assembled on the ground, rolled up for hoisting into position, and bolted to the four cables. The fine mesh screen is turned up on each side of the walk to form a footboard, and a wire cable handrail supported above it.

There are two catwalks for each span, separated by the width of the bridge roadway. At intervals crosswalks are placed between, to provide paths for workmen and to stiffen the flexible screening. Storm cables are then run from points near the foot of each tower to the centers of the catwalks, to lessen sway in high winds. The walks are now ready for the cable spinning operations.

Vertical timber frames resembling gallows are erected over each catwalk to support the two cables of the endless tramway which is to carry the spinning wheels back and forth. This endless cable travels over a horizontal pulley at each anchorage. One pulley is on a shaft which is geared to an electric driving motor, but the other turns freely. One of these tramways is required for each cable. V-shaped hangers which support the traveling spinning wheels are fastened at opposite ends of the endless cable which will carry the wire strands back and forth across spans.

Since the location of the entire cable depends upon the accurary with which these endless guide wires are placed, the final adjusting work is done at night, when all parts of the cable are at a constant temperature. Surveying instruments set up on nearby hills are used to check the sag in each span.

The actual spinning or weaving of the cables is the next step. There are 17,464 galvanized steel wires in each cable, lying parallel and divided into 37 strands of 472 wires each.

The strands are built up two wires at a time in mid-air, a loop of wire being carried across for each aerial trip of a spinning wheel or mechanical spider traveling at a speed of about eight miles an hour. A loop of wire for another strand is brought back on the return trip of the wheel, when the tramway is reversed. There are reels of wire at each anchorage.

The spinning wheels are fed from reels mounted on mechanically driven unwinding machines. The end of the wire is run down into the anchorage through a succession of sheaves or pulleys, and secured to one of the eyelets which are imbedded in the concrete anchorage. A loop of this wire is thrown around the spinning wheel, and the tramway then started, to carry the wheel up to and over the two main towers, then down to the other anchorage a mile away.

Here workmen remove the loop of wire, place it in clamps, and toss a loop from another reel over the wheel for the return trip. The first loop is cut and threaded through the sheave of an anchorage eyelet, after the slack has been taken out of both wires with block and tackle to give the correct sag. When the two wires have been adjusted to the correct length, they are again held in clamps, extra wire cut oft, and the ends fastened together again with a special threaded sleeve.

The same procedure is carried out for the spinning wheel on the other side of the endless cable, making possible the construction of four strands at the same time. To speed up the work, two wires can be carried by each wheel.

When the 37 separate strands of a cable have been completed, placed in their permanent saddles, and fastened to the anchorage eyelets, there remains the squeezing of the cable from its rough hexagonal shape into the final rounded shape with a diameter of nearly 29 inches.

The cable-compressing operation is performed with a squeezing jack consisting of six heavy plungers arranged radially, and operated by a compressed air motor. As pressure is applied, the cable is tapped with wood mallets, to jar wires into position.

Before the pressure of the jack is released, wire is wrapped tightly around the cable to hold it in a circular shape. The jack is then moved along the cable to the next compressing position.

The next step, after the cables have been squeezed and fastened with wire bands, is the placing of the suspender rope saddles. These are clamped over the cable at points 30 feet apart, in much the same manner as split bearings are placed over a shaft.

Each catwalk is now securely lashed to its cable, to permit removal of the four cables which supported it. The 43 miles of heavy steel cable are now cut into carefully measured lengths, and clamps attached to each end. These cables loop over the saddles, and support the roadway below.

The final step in the spinning process is the ‘ wrapping of the entire cable with a protective layer of steel wire. This is done with a special wrapping machine powered by an electric motor. Bobbins of wire mounted on a large spur gear feed out wire as they are rotated by the motor and moved along the cable, to lay an even wrapping of galvanized wire. Protective coats of paint are applied to the cable before and after the wrapping operation.

Permanent wire ropes are suspended above the main cables to serve as handrails for the painters who must go over these cables regularly each year. There remains then only the construction of the double-deck roadway to bring to completion an engineering project which was first proposed some sixty-five years agoâ€”a bridge capable of carrying 25,000,000 vehicles and 50,000,000 interurban passengers a year.