Mechanix Illustrated
Issue: Dec, 1958
Posted in: General
2 Comments on How Those Hula-Hoops Got Rolling (Dec, 1958) 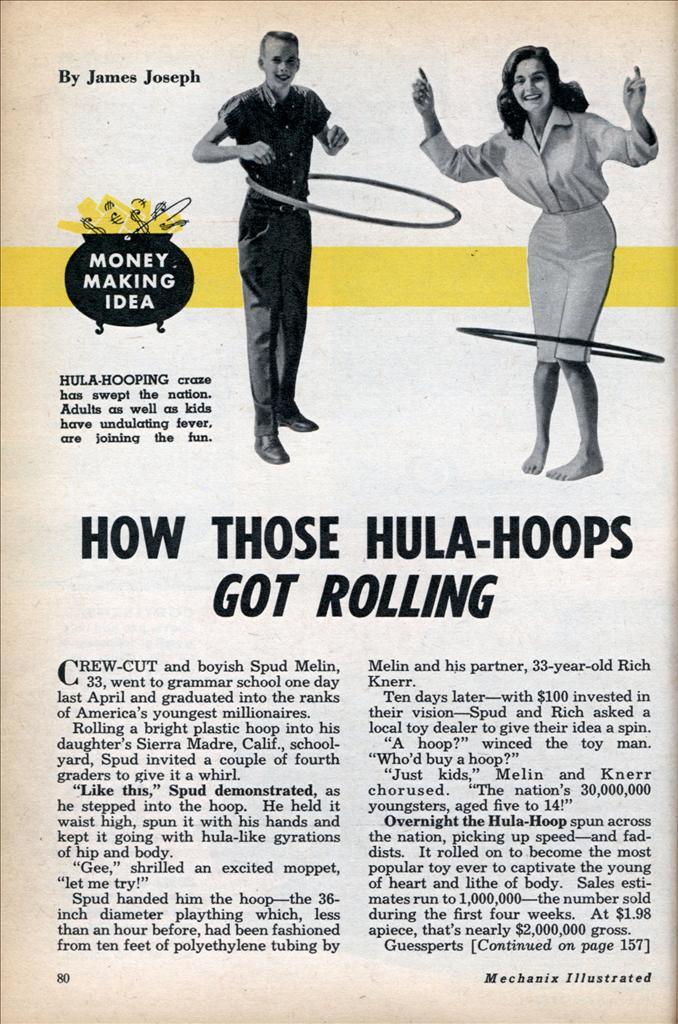 How Those Hula-Hoops Got Rolling

CREW-CUT and boyish Spud Melin, 33, went to grammar school one day last April and graduated into the ranks of America’s youngest millionaires.

Rolling a bright plastic hoop into his daughter’s Sierra Madre, Calif., schoolyard, Spud invited a couple of fourth graders to give it a whirl.

“Like this,” Spud demonstrated, as he stepped into the hoop. He held it waist high, spun it with his hands and kept it going with hula-like gyrations of hip and body.

Spud handed him the hoopâ€”the 36-inch diameter plaything which, less than an hour before, had been fashioned from ten feet of polyethylene tubing by Melin and his partner, 33-year-old Rich Knerr.

Ten days laterâ€”with $100 invested in their visionâ€”Spud and Rich asked a local toy dealer to give their idea a spin.

Overnight the Hula-Hoop spun across the nation, picking up speedâ€”and faddists. It rolled on to become the most popular toy ever to captivate the young of heart and lithe of body. Sales estimates run to 1,000,000â€”the number sold during the first four weeks. At $1.98 apiece, that’s nearly $2,000,000 gross.

Guessperts [Continued on page 157] believe the two swivel-hipped young entrepreneurs should roll up $5,000,000 in profits before the Hula-Hoop ends its dizzy whirl.

Melin and Knerr have been turning out hundreds of thousands of hoops on dozens of hastily set up production lines from Newark, N. Y., to San Gabriel, Calif. A single lineâ€”working around the clock and employing upwards of 50 summer-vacationing high-schoolersâ€”puts together 7,000 hoops a day.

Two schoolboys manually bend them into shape (bending takes but five seconds) . Another inserts a four-inch hardwood dowel, firming the juncture. A couple of staples and the hoops are ready to roll.

Spud and Rich were just 23 and out of high school when they made their first business success with their Wham-O slingshotâ€”a 40-lb. pull job with a 50-ft. range for killing small animals.