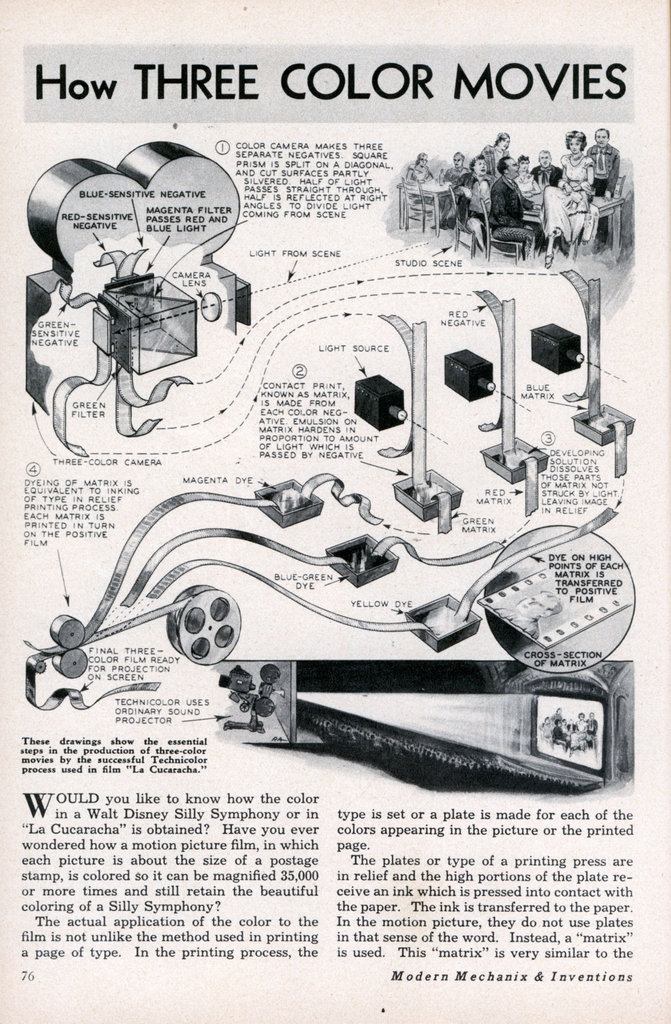 The actual application of the color to the film is not unlike the method used in printing a page of type. In the printing process, the type is set or a plate is made for each of the colors appearing in the picture or the printed page.

The plates or type of a printing press are in relief and the high portions of the plate receive an ink which is pressed into contact with the paper. The ink is transferred to the paper. In the motion picture, they do not use plates in that sense of the word. Instead, a “matrix” is used. This “matrix” is very similar to the printer’s type or plate, and the color impression is made by dyeing the “matrix” and pressing it in contact with a motion picture film.

In a picture on paper, if the finished print shows three colors, three separate plates have to be made and the paper run through the press three times. In the same way a motion picture receives a printing, or an “imbibition” as it is known in the studios, for each color that appears on the screen.

Until the perfection of the Technicolor Three-Color process, which was first used in the Disney cartoons, all motion pictures were colored in only two colors; namely, red-orange and green-blue. Of course the use of only two colors resulted in a limited color range. Now, however, with the perfection of a method of applying three colors, a more natural and true to life color on the screen is possible. This was brought about through the enterprise of Dr. Herbert T. Kalmus.

The Technicolor Three-Color process is the nearest approach to the colors and delicate shades found in nature. It was perfected for Technicolor under the supervision of J. A. Ball, and was first commercially used in 1932 in the Walt Disney Silly Symphony, “Flowers and Trees.” The same process was first used in a real-life picture, “The House of Rothschild,” in a color sequence supervised by Natalie Kalmus. It was also used in “La Cucaracha,” a two-reel short which has taken the country by storm because of its beautiful color. Financed by John H. Whitney at a cost of $65,000, which is over three times the cost of an uncolored picture of the same length, this is proving to be the first notably successful color film outside of the cartoons. In photographing a Disney Silly Symphony, three negatives are made, one each for the three colors, red, green, and blue. All colors of the rainbow can be reproduced by a blending of these three primary colors. The three negatives are made through filters which absorb certain portions of the light passing through them. The light striking the red negative is photographed through a red filter that absorbs or stops all the colors except red. This gives a photographic record of the red objects in the picture. In like manner, the green and blue negatives are photographed through green and blue filters.

Walt Disney and his staff paint the cartoons in the colors desired, and then a special Technicolor camera photographs the three negatives at one operation. The three negatives are made simultaneously through the use of a special prism. Each of these negatives records the intensity and extent of only one color; for instance, on the blue negative is a picture of only the blue color in the objects, on the red negative is the image of the red objects, etc. From each of the three negatives is made a print on a special gelatine coated stock, which is called a “matrix.” In making the “matrix,” a silver image is not used as in the case of ordinary black and white photography. Instead, a photographic emulsion in the form of a gelatine, sensitive to light, is used.

This gelatine emulsion has the characteristic of hardening under the action of light. When light strikes this emulsion after going through the negative, it becomes hard and insoluble in proportion to the intensity of the light striking it.

In making the red “matrix,” a light beam is passed through the negative of the red record by an optical arrangement to strike the “matrix.” This is called “optically” printing the “matrix;” after it is printed the soluble portions, that is, the portions not acted on by light, are dissolved away, leaving a relief image. This relief image is then dyed a blue-green color and pressed into contact with the film which is to be shown on the screen. In pressing this “matrix” into contact, the dye image is printed in a manner not unlike the method used in printing from type in the printing press. The matrices for the other two colors are made and dyed in the same manner, after which they are also pressed into contact on top of the first image. This results in a picture which is a combination of the three colors, and is the final film ready to be shown on the theater screen. Once the matrices are prepared, as many three-color films as are desired can be printed.