Science And Mechanics
Issue: Aug, 1960
Posted in: Origins, Space
3 Comments on How Tiros Photographs the World (including Russia) (Aug, 1960)

How Tiros Photographs the World (including Russia) (Aug, 1960) 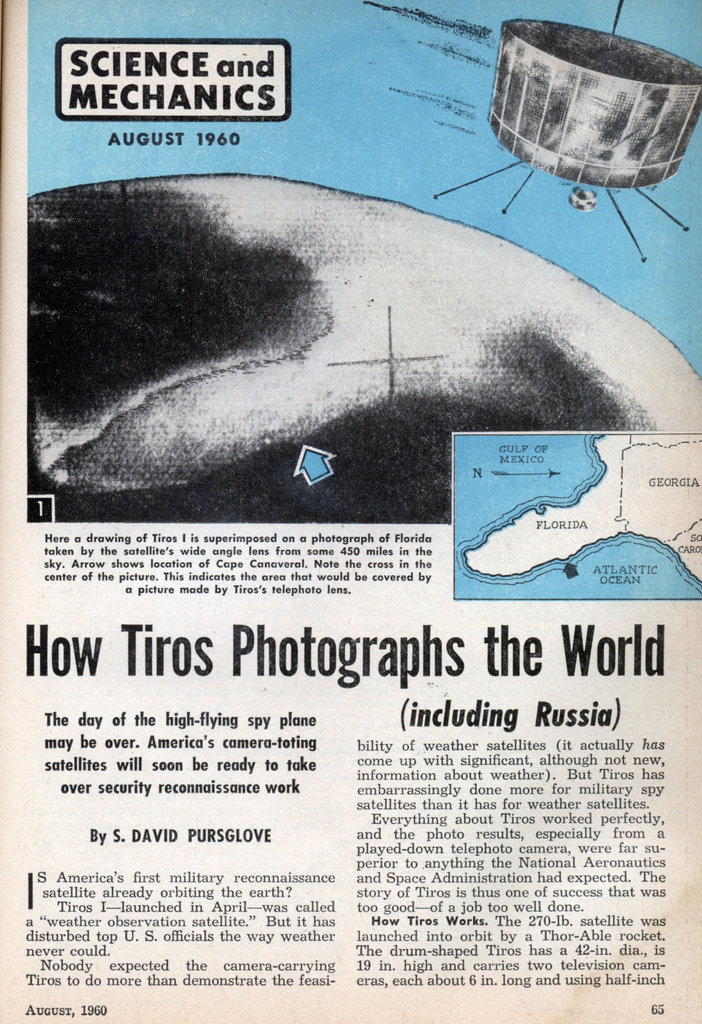 How Tiros Photographs the World (including Russia)

The day of the high-flying spy plane may be over. America’s camera-toting satellites will soon be ready to take over security reconnaissance work

IS America’s first military reconnaissance satellite already orbiting the earth? Tiros Iâ€”launched in Aprilâ€”was called a “weather observation satellite.” But it has disturbed top U. S. officials the way weather never could.

Nobody expected the camera-carrying Tiros to do more than demonstrate the feasibility of weather satellites (it actually has come up with significant, although not new, information about weather). But Tiros has embarrassingly done more for military spy satellites than it has for weather satellites.

Everything about Tiros worked perfectly, and the photo results, especially from a played-down telephoto camera, were far superior to anything the National Aeronautics and Space Administration had expected. The story of Tiros is thus one of success that was too goodâ€”of a job too well done.

Speed of the electrically operated focal plane shutters is .0015 second, slower than shutters used in high speed sports photography. The shutters make possible a series of still pictures that can be stored on tape for transmission to earth as Tiros approaches one of the two ground command points. The recorders carry 400 ft. of tape at 50 ips. Erase heads located just behind the transmitter pickup enable the tape to be cleaned and ready for more recording as soon as the stored pictures are sent.

The pictures are sent to earth by 2-watt FM transmitters on the 200 mc band, a transmitter for each camera. Each camera also is coupled to an electronic clock that receives programming instructions from the ground. These tell the camera when it is to take its pictures during the orbit following ground instructions. NASA says the clock for the telephoto camera failed temporarily, then corrected itself after a period of several weeks. During those weeks, however, the camera took pictures only when in range of the two ground stations (Fort Monmouth, N. J., and Kaena Point, Hawaii).

Solar Cells for Power. Covering the satellite are more than 9,200 small rectangular solar cells to provide about 19 watts of power and to charge nickel-cadmium storage batteries so the satellite can operate when not in the sun. Four transmitting antennas extend below the satellite, and one receiving antenna is on top.

Although the infrared identification sensors from which Tiros gets part of its name (Television and InfraRed Observation Satellite) were not included in the satellite, it does contain small infrared units for locating the horizon. These detect the difference between earth temperature and space temperature and let Tiros know when its cameras are swinging over earth or pointing into space. This information is sent to the ground, where it is converted to spin axis attitude data by a punch-tape recorder. This data for each photograph helps locate the area shown in the picture.

Tiros contains a second direction and orientation device. This is a North indicator which labels the direction on each photograph. Each of nine solar cells recessed around the satellite briefly views the sun through a narrow slit, producing an electrical signal whose strength is proportional to the amount of light falling on the cell. These pulses are transmitted with the pictures to the ground stations where rapid sun-angle computers process the information for display on a screen with the TV picture.

“Yo-Yo” Cut Spin. Tiros is stabilized in its orbit by spinning, like a gyroscope. When the satellite was separated from the solid pro-pellant third stage, it was spinning at about 136 rpm. This was deliberately done by small rockets mounted on a spinning plate so that Tiros would follow a true path, just as a rifle bullet is spun for accuracy. However, pictures taken at 136 rpm would be blurred, so a de-spin mechanism slowed the satellite down to 12 rpm after orbit was accomplished. This mechanism proves that the key to genius often is simplicity. It was merely a cable with weights on the ends. The cable was wrapped around Tiros, and it operated like a yo-yo; as it unwound, it reduced the spin speed of the satellite. It dropped away from Tiros when the desired spin rate was reached.

Although Tiros should not spin faster than 12 rpm for good pictures, it should not fall below 9 rpm or it will become unstable. When the satellite slowed down, however, as determined by ground measurements, NASA scientists signalled a set of small rockets to fire, speeding up the spin rate. There are three such sets of rockets, each good for one correction.

Inside the satellite is the anti-wobble mechanism, a system of travelling weights that move along vertical rodsâ€”opposite to the direction of wobbleâ€” to absorb the energy of wobbling instead of letting the satellite absorb it.

Tiros has sent back to Washington, D. C, via the Army’s Fort Monmouth, many pictures of the earth and its clouds. In fact, its cameras functioned so well that NASA had to speed up film processing to handle the volume.

In those photos made public so far, there is not enough detail to help military intelligence officers. Even the better telephoto pictures made after technicians learned how to adjust contrast on the faces of oscilloscopes from which they were photographing the pictures transmitted from Tiros may not contain the kind of detail that military planners hope to get from successors to Tiros. This fall, a more sophisticated satellite will go aloft, armed with a sensitive infrared sensor coupled to the photo system. Its photos not only will be much clearer and show rnore ground detail, but they also will classify objects on the basis of heat emission and absorption. Thin bands of roads and streams that look much alike will identify themselves.

Good Weatherman? Why all of this expensive, talent-consuming effort? What has Tiros accomplished so far? Actually, there is widespread disagreement among meteorologists and other scientists over the potential value of a weather satellite.

Mostly, Tiros has confirmed facts that we already knew. Its pictures of storms showed weather that already had been reported from ground stations. But even this is somewhat in its favor. A storm pictured by Tiros from over New Caledonia had been known for a week before the satellite was launched. However, the results show that it was possible to command Tiros to photograph a well-known storm so that weather researchers could learn which features in a photo correspond to specific conditions in a storm. After meteorologists do this often enough, they will be able to look at a satellite cloud cover photo and tell fairly accurately what the weather is like, even over unpopulated areas where they cannot obtain ground reports.

However, clouds are hot the only aspect of weather. Dr. Harry F. Wexler, director of meteorological research for the U. S. Weather Bureau, described to a press conference at NASA headquarters some of the weather conditions observed by Tiros up to that time.

He showed pictures of a large storm 120 miles east of Cape Cod. He noted that at the same time dry continental air was streaming off the United States, and it was not shown by clouds. Consequently, this important aspect of that area’s weather was not spotted by Tiros. That same day, Tiros spotted clouds that indicated a large storm over the Midwest. Weather records reveal that in addition to overcast skiesâ€” the feature seen by Tirosâ€”there was also a mass of cold air streaming in from Canada. This could not be spotted by Tiros.

Clear Spot Is Cold Air? But the fact that Tiros could not spot the cold air does not mean that it didn’t show up in the Tiros pictures. On the contrary, after enough pictures have been correlated with known conditions, it is possible that meteorologists may be able to say that a clear spot on a cloudy picture indicates cold air. The absence of detail in a photograph sometimes may be more important than visible features. Dr. Wexler and other weathermen admit this still is conjecture, since the careful analysis of Tiros’s pictures has just started.

But many Washington reporters are wondering why, if the weather bureau needs a satellite at all, NASA did not just send up an improved Vanguard (see P. 81, June ’59 S&M). It is less expensive and longer-lasting than the bulky Tiros, whose electronic components have an operational lifetime of only several months.

Vanguard’s pictures can show only clouds, rather than any land masses, highways, railroads and such. Its pictures, though, would provide meteorologists with all the cloud cover information they need, all they can get from the costly Tiros.

On the other hand, visualize the kind of picture that Tiros’s telephoto lens may have taken, compared to the wide angle photos in Figs. 1 and 4. Figure 5 shows a Tiros photo made with the narrow angle lens before the oscilloscope screen contrast was properly adjusted. If the improvement in clarity caused by adjustment is as good as the clarity improvement in the wide angle lens pictures, we should be able to see large man-made features.

Nobody denies this will be possible with Tiros II and the later Nimbus weather satellite. Our military officials, indeed, hope it will be a foregone conclusion with the upcoming Samos Air Force recon satellite.

The only question remaining then, is: is * the Tiros satellite already our first military spy in the sky?