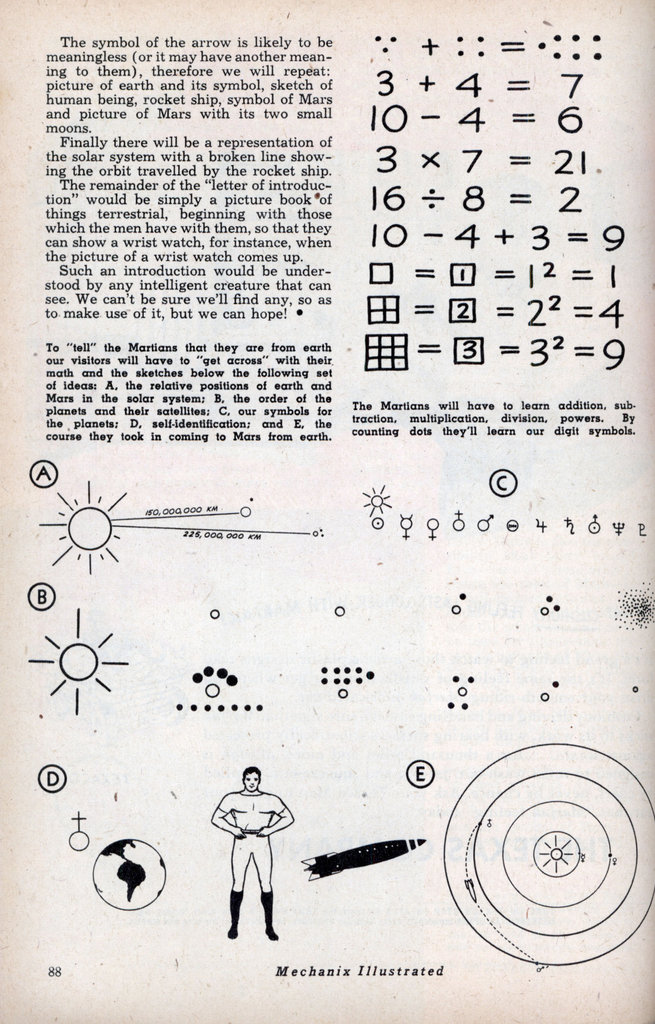 Of the other planets of our solar system, Gauss said, the two which are closest to us, Venus and Mars, seem to resemble earth very much. If they do they might harbor life, he continued, and if they harbor life they might harbor intelligent life forms, the equivalent of man on earth. The way to find out is to send them a signal which proves to them that we are intelligent and which invites them to reply, to prove their own existence and intelligence. Of course our signal will have to be of such a nature that it cannot be taken for an accident of nature. A gigantic beacon, for example, might be considered only a volcanic eruption. Our signal will also have to be one which has meaning to them as well as to us. A gigantic mound which forms the letters ABC would mean something to us, for example, but not a thing to a Martian or a Venusian; it would even be meaningless to most Chinamen.

Gauss, pondering this problem, came to the conclusion that our signal had to be a mathematical figure and nothing else, and he selected the one made famous by Pythagoras, the triangle with a square over each side, proof that the square of the hypothenuse equals in area the sum of the other two squares. If the Martians or Venusians are intelligent enough to have progressed to simple geometry they must know this figure, and it must mean the same to them as it does to us.

The next problem was how to produce a mathematical figure of the necessary size, and here Gauss had a brilliant idea. He suggested making it of dark pine forests planted in the Siberian tundra in strips several miles wide and up to a hundred miles long. The interior of the triangle and the squares would be planted with wheat, for contrast. Aside from its mathematical meaning such a design could never be accidental, for nobody would plant things in such a crazy pattern with so much waste of space unless there was a good reason for it.

Gauss’ idea may never be carried out now, for it looks as if we will land a rocket ship on Mars or Venus first. Suppose our interplanetery explorers encounter intelligent life on Marsâ€”creatures at just about our level of progress (of necessity we would have progressed somewhat farther, or else they would visit us) and having about the same set of sense organs. How will we communicate with them? First we will want to “get across” the simple fact that we are visitors from earth. We will not be able to talk to them. We might never be able to talk to them, because they may not be capable of emitting articulate sounds. How can weâ€”assuming that they can see and are intelligentâ€”explain our place of origin to them?

The answer is to have a prepared manuscript, something like a letter of introduction, written in such a way that they will have to understand it if only they study it carefully. The language of this letter? Partly mathematics, mostly pictures.

The first page will be an introduction to our mathematical symbols. It will begin with a single dot with the figure 1 next to it, then show two dots with the figure 2, then three with the figure 3, and so on. This will give them the digits from 1 to 9 and the symbol for 0.

Next will be examples introducing the plus and minus signs. The figures used for the examples have to fulfill two conditions: be simple and permit cross-checking to see whether the ideas which the alien intelligence derives from them are correct or riot. Fractions and decimal fractions, squares and cubes and roots will then be shown. All this can be made very clear. Then the powers, going beyond the cube of a figure to show that we are used to abstract things too, since there is actually no higher power than the cube in solid geometry.

The powers of ten would then follow, to show how our system of numbers operates. Since we could also have chosen the 12 as the basis for our numerals there will be a picture of a man with both hands spread, to show that we chose the ten because of our biological accident of having ten fingers.

The main purpose so far is not the establishment of our own intelligence (the rocket ship would be sufficient proof of that) but to explain our method of notation, required for denoting our place of origin.

For that it is further necessary to establish our system of measurement, and since the metric system is far the best we use that. We start with a picture of earth, with one meridian. Then is pictured the meridian alone; then the meridian stretched out and marked 40,000 km. Then, as a cross check, the picture of earth once more, with equator marked and a meridian from equator to one pole marked 10,000 km.

Then comes a picture of the sun and one planet with one moon and, farther out, another planet with two moons. Each has its distance marked in kilometers. After this a picture of the sun with the planets in succession, marked at first by figures in circles. Here a potential misunderstanding lurks. To us it is obvious that earth is the third planet from the sun and Mars the fourth, but the Martians might not know Mercury, for to them it is very much hidden in the sun’s rays. Possibly, on the other hand, they, have knowledge of a planet inside Mercury, although this is highly unlikely. There is also the possibility that they count Erosâ€”part of whose orbit is inside the orbit of Marsâ€”as a full-fledged planet. To avoid such misunderstandings the whole system has to be used for illustration: the two tiny moons of Mars, the four big moons of Jupiter, the rings of Saturn and the multitude of minor planets between Mars and Jupiter cannot possibly be mistaken. For simplicity’s sake we now repeat the picture, showing the planets marked by their symbols. And then comes the identification: the symbol of earth, an arrow and the symbol of Mars.

The symbol of the arrow is likely to be meaningless (or it may have another meaning to them), therefore we will repeat: picture of earth and its symbol, sketch of human being, rocket ship, symbol of Mars and picture of Mars with its two small moons.

Finally there will be a representation of the solar system with a broken line showing the orbit travelled by the rocket ship.

The remainder of the “letter of introduction” would be simply a picture book of things terrestrial, beginning with those which the men have with them, so that they can show a wrist watch, for instance, when the picture of a wrist watch comes up.

Such an introduction would be understood by any intelligent creature that can see. We can’t be sure we’ll find any, so as to make use of it, but we can hope!