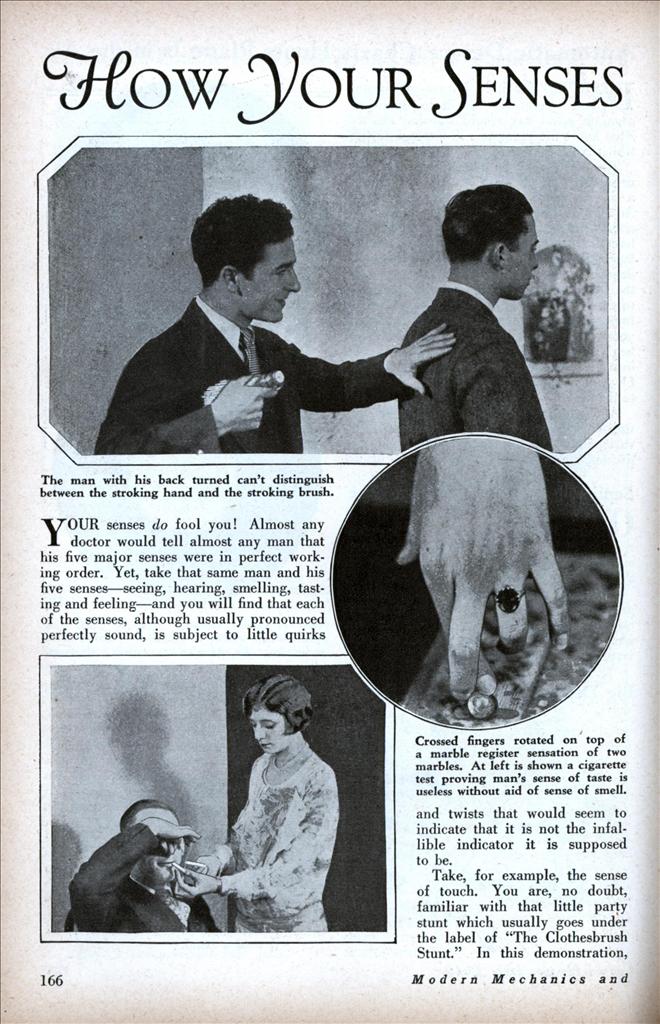 How Your Senses Fool You

YOUR senses do fool you! Almost any doctor would tell almost any man that his five major senses were in perfect working order. Yet, take that same man and his five senses—seeing, hearing, smelling, tasting and feeling—and you will find that each of the senses, although usually pronounced perfectly sound, is subject to little quirks and twists that would seem to indicate that it is not the infallible indicator it is supposed to be.

Take, for example, the sense of touch. You are, no doubt, familiar with that little party stunt which usually goes under the label of “The Clothesbrush Stunt.” In this demonstration, the performer takes a clothes brush and offers his services as valet to some spectator. The spectator offers himself, and the entertainer proceeds to “brush him off”; at least that is what the spectator is fondly imagining. Instead, the performer is smilingly brushing his own coat, while he strokes the back of the victim’s coat with his free hand. The illusion is very deceptive and its complete success results from the fact that the average person’s sense of feeling is comparatively undeveloped in the regions around the shoulders—far too undeveloped to detect the difference between the feel of a stroking hand or a stroking brush.

This variation of the sense of feeling is quite interesting; and its wide differences can be easily shown through a few simple tests. For the first, take a pair of sharp-pointed scissors and spread the points to a distance of about one-eighth inch. Now, press these two points of the scissors into the hand of an assistant on one of the fingertips. Ask him whether he feels one or two points, and, in the majority of cases, he Avill immediately answer, “two points.” Take the same scissors, however, and press them into the shoulder of the assistant, and he will pronounce the two points, which are still separated one-eighth of an inch, as one point. Indeed, the sense of touch so greatly varies that it is usually necessary to separate the scissor points to a distance of almost two inches before two separate pricking sensations are experienced by the spectator.

Even though the fingertips are very sensitive, they are not infallible. This is easily demonstrated by crossing the first and second fingers of one hand, and placing the crossed tips lightly on top of a round marble, as shown in the photograph. The fingers are then rotated on top of the marble; and the sensation produced is that of two marbles being pressed under the fingers.

The other senses, too, are foolers. The sense of taste, especially, is wholly unreliable when not assisted by its companionate sense — the sense of smell.

Any inveterate cigarette smoker will tell you that he “tastes” the cigarette he smokes, and that one brand of cigarette tastes entirely different from another brand. Blindfold him and have him hold his nose. Place him in a room where the temperature is eighty or above. And then, have him take haphazard puffs on a lighted and an unlighted cigarette of different brands. In the course of two minutes he will not only be unable to distinguish between the smell of the tobacco in the two brands, but he will be unable to tell whether he is puffing on the lighted or unlighted cigarette. The explanation is simple: The sense of taste alone is really of no use unless aided by the other senses, particularly the sense of smell. In a similar manner, the average person cannot detect the difference between raw potato and raw apple unless his taste organs are assisted by the seeing and smelling senses.

Your eyes, of course, are the biggest “jokers.” Have you ever bought a suit or a dress, thinking it to be one color under the artificial light of the store, and then finding it to be something else in broad daylight?

Almost all of the principles which govern these delusions in vision are being applied in the various arts—interior decorating, dressmaking, etc. One of the most familiar of these deceptions is that a vertical line appears longer than a horizontal line; and in actual practice this principle is used in the dressing of stout and very slender people in order to make them appear of an average size. An optical illusion which shows this principle is pictured in the diagram and photograph above. Hold this magazine almost on a level with your eyes and sight across the diagram, having it parallel with your eyes. What you see is something of a stockade, with the various lines standing on end as posts. Looking at the same diagram from the side, the lines appear to be merely lines, somewhat shorter, and lying flat. The same thing applies to suits and dresses with horizontal or vertical stripes. The horizontal stripe tends to make the wearer shorter and stouter than he really is; while the vertical stripe serves to apparently increase his height and render less conspicuous his “beam” dimensions.