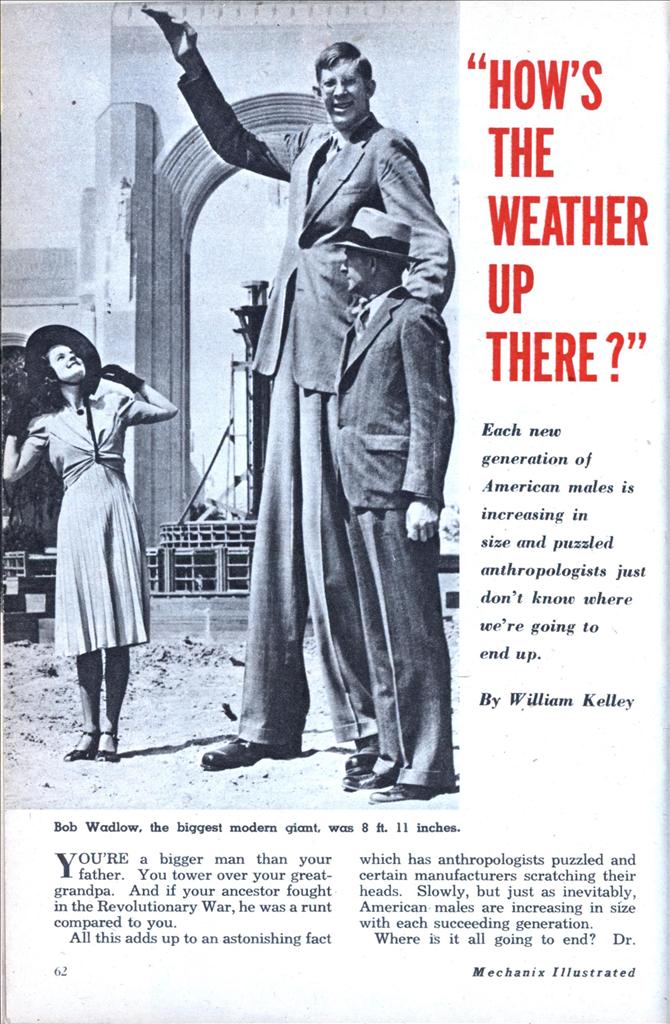 “HOW’S THE WEATHER UP THERE?”

Each new generation of American males is increasing in size and puzzled anthropologists just don’t know where we’re going to end up.

YOU’RE a bigger man than your father. You tower over your great-grandpa. And if your ancestor fought in the Revolutionary War, he was a runt compared to you.

All this adds up to an astonishing fact which has anthropologists puzzled and certain manufacturers scratching their heads. Slowly, but just as inevitably, American males are increasing in size with each succeeding generation.

Where is it all going to end? Dr. Harry L. Shapiro, curator of the department of anthropology at the American Museum of Natural History, has looked into the matter extensively and concludes: “Even if this trend should appear desirable and we take pride in our rising statures, we should soon reach a point where further increases would become rather alarming. Are we experiencing a transformation into giantism, with averages of 6 ft. 6 in. or 7 feet within several hundred years or so? Are we heading for ungainly dinosaurian proportions that will lead to our extincton?”

Nobody knows the real answer, as of now, but one thing is certain. The phenomenon has not been lost on various phases of industry, even the U.S. Government. After all, if Americans are blossoming upward and outward, there are some pretty important adjustments that have to be made.

Americans’ extra height and bulk makes it necessary for clothing manufacturers to watch the situation closely and alter their sizing formulae accordingly. Auto manufacturers are keenly aware of what’s going on, hence are careful to provide easily adjustable seats. Factory equipment must be made with controls that can be easily and safely handled by taller workers.

And then, of course, there are beds. This may come as news to most people—there has been a virtual revolution in the bed and bedding industry, just now coming to a head, and all because we’re getting bigger.

Not long ago, manufacturers began noting with some consternation that more and more beanpole Americans were trying to slumber in sacks that didn’t fit them. More and more big folks were being forced to lie diagonally across beds and more and more feet were being exposed to frosty winter nights as covers were brought up under chins.

Obviously, something had to be done. The bed and bedding makers huddled with each other and then went into an earnest series of confabs with experts at the U. S. Department of Commerce’s Commodities Standard Division.

The aim: New dimensions to give Mr. Highpockets an uncramped night’s snooze. Results: King-size beds, mattresses and covers which are in production right now and will soon be on the market.

First, while the reason why folks are getting taller is not yet known, one thing is certain: It’s a definite advantage, all things considered, to be on the large size.

Personnel managers, for instance, admit frankly that if two men with equal qualifications apply for one job, the nod generally goes to the taller. A survey by the Provident Mutual Life Insurance Company of Philadelphia discovered that the bigger the man, the more insurance he carries. B. Franklyn Blair, who was in charge of the study, concluded that tall men have greater financial success since the amount of insurance held has always been a tip-off on a man’s earning power.

Does a tall man live longer than a short one? Dr. Louis I. Dublin, vice-president and statistician of the Metropolitan Life Insurance Company, answers, “For the most part, very short and very tall persons merely represent the extremes of normal height distribution and their longevity does not materially differ from the average.”

Discounting the giants of mythology and the fairy tales, the tallest man who ever lived was an amazing fellow named Robert Pershing Wadlow. According to the Journal of the American Medical Association, his story “exceeds every other documented case of giantism.”

Wadlow came into the world in Alton, Ill., on Washington’s birthday in 1918 and there was no indication that nature was playing one of her strangest pranks of all time. Young Wadlow weighed a normal eight-and-a-half pounds and for the first few months progressed as any baby would.

Suddenly the infant began to grow at a phenomenal rate. At six months he weighed 30 pounds, as heavy as a two- and-a-half year old boy. At four he looked as tall as a youth in his teens. At nine, he could lift his 150-pound father and played with an express wagon that could hold three men.

Wadlow added three inches to his height every year. At 11, he had his picture taken with former heavyweight boxing champ Primo Camera, a giant himself, and shaded the Preem by a good two inches. At 16 he measured 7 ft. 10 inches and at 22—the year he died following an ankle infection—he was fully 8 ft. 11.09 inches tall and weighed 495 pounds!

Actually, there are several different types of giants, all caused by hormone oversecretions of one kind or another by the body’s master gland, the pituitary.

One is the so-called normal giant, whose body simply grows larger than anyone else’s but in proportion.

Another is the eunuchoid giant, whose growth hormones increase but at the same time there is a decrease in the sex-stimulating secretions.

Third, and probably most frequent, is the acromegalic giant. His hands, feet and face are grossly enlarged, his vocal cords become long and thick and hence his voice rumbles in a thick basso profundo and he develops an enormous chest.

Even though science tells you that you’re growing taller with every generation, that still doesn’t help the little fellows right now. The big question, as far as they are concerned, is this: Can anything be done, outside of wearing lifts in the shoes, to increase height?

There is no pat answer. Directors of gymnasiums point out that proper exercises can improve posture to such a degree that a man can actually look a good deal taller. Some gym owners insist that various spine-stretching exercises can add up to an inch or more if the subject is still in his early 20’s and still supple. A number of doctors, on the other hand, scoff at the “torture methods” and claim they don’t help.

And if by chance they don’t, be consoled by science’s promise: Your grandson will surely be a bigger man than you, and that’s no tall story. •