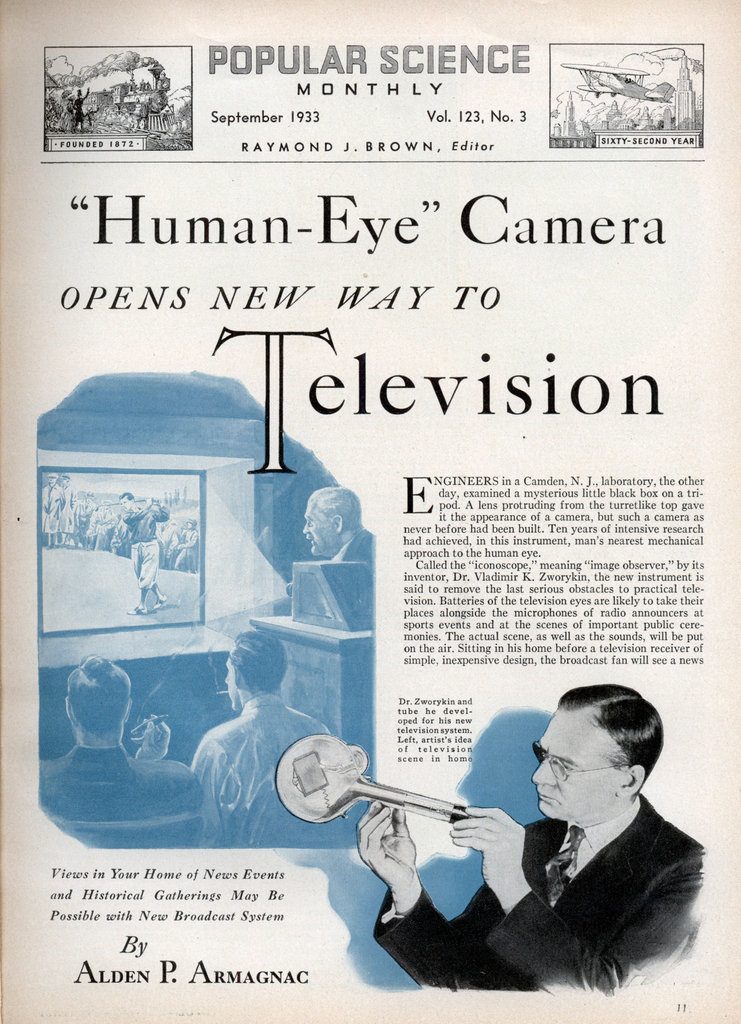 ENGINEERS in a Camden, N. J., laboratory, the other day, examined a mysterious little black box on a tripod. A lens protruding from the turretlike top gave it the appearance of a camera, but such a camera as never before had been built. Ten years of intensive research had achieved, in this instrument, man’s nearest mechanical approach to the human eye.

Called the “iconoscope,” meaning “image observer,” by its inventor, Dr. Vladimir K. Zworykin, the new instrument is said to remove the last serious obstacles to practical television. Batteries of the television eyes are likely to take their places alongside the microphones of radio announcers at sports events and at the scenes of important public ceremonies. The actual scene, as well as the sounds, will be put on the air. Sitting in his home before a television receiver of simple, inexpensive design, the broadcast fan will see a news event that is taking place miles away.

Predictions like this have been made before; now, at last, they seem about to be realized. The scientific part of the work is done and only the commercial and financial problems of television remain to be worked out, Dr. Zworykin declares. His mechanical eye solves the problems that have kept television in the experimental stage. Any one of the iconoscope’s three most noteworthy features would, alone, be reckoned an outstanding advance in television.

Most obvious, from a glance at the new instrument, is its portability. Compact and light enough to be slung over the shoulder like a movie camera, it is easily carried to the scene of action.

Second, because of the iconoscope’s sensitivity to light, television will 110 longer be restricted to the studio, under glaring lights; outdoor scenes also can be put on the air.

Lastly, the iconoscope is a television eye without a single mechanical moving part. There are no whirling disks or humming motors, and therefore there is virtually no limit to the speed at which the robot eye can take in a scene.

Strangely enough, all these gains have been secured by a return to first ideas of television, which are worth recalling in order to understand the latest invention.

The one problem in television is to put a picture into a transmitter, and get it out again at a distant receiver virtually instantaneously. Invention of the selenium cell and later of the more sensitive photoelectric cell provided the tools to make this possible. These cells have the power of turning light into electrical impulses for transmission by wire or radio.

Using these cells, each part of a picture could be transformed into a strong or weak electrical impulse, depending on whether it was light or dark; the impulses could be transmitted instantly to the receiving end; and there transformed back into light and used to build up the picture again.

The simplest way to do this would be to project the picture on a checkerboard of photo-electric cells grouped closely together, and transmit all their impulses at once to corresponding electric lamps or shutters in a similar checkerboard arrangement behind a receiving screen. In this way two Frenchmen, as long ago as 1906, succeeded in transmitting simple patterns with a bank of sixty-four photo-electric cells, each one connected by a pair of wires to a shutter in the receiver.

To obtain a clear picture with sharp detail, it is necessary to reproduce, individually, the lightness or darkness of at least 70,000 different parts or picture elements of the original image. Obviously, it would be impossible to transmit so many impulses simultaneously, since it would require 140,000 wires from the transmitter to every receiver. Hence arose the alternative scheme: to explore or “scan” the picture and transmit its parts one by one instead of all at once.

This would require only one wire or radio channel.

Virtually all recent television experiments have been based on this principle. By any one of a variety of means, such as whirling disks studded with lenses or pierced with holes, each part of a scene in turn is momentarily allowed to register its lightness or darkness upon a single photo-electric cell, and the resulting series of electrical impulses is put on the air. At the receiving end, the impulses control the brightness of a spot of light that travels over a corresponding path on a receiving screen to rebuild the picture. So rapidly is this done that the track of the light beam in the receiver fuses into a single complete image; and the process is repeated enough times a second to give moving pictures.

Recently television engineers struck a snag. Apparently no further improvement in picture quality, which would require them to run a transmitter faster in order to cover more individual points of a picture, was possible. They were already running their machines so fast that the photoelectric cells of their transmitters barely had time to respond as each part of the image whirled before them. As a result only studio television under glaring light was considered practical.

Where others had failed in this seemingly insuperable task, Dr. Zworykin, by throwing away current ideas and going back to first principles, succeeded. Working in the laboratories of the RCA Victor Company in Camden, N. J., he produced a mechanical eye that is a triumph of inventive genius.

Like the human eye, the iconoscope uses a lens to project an image of a scene upon an artificial retina, and this amazing retina is the key to the whole invention. Just as the human eye’s retina is composed of innumerable rods and cones that respond to light, so Dr. Zworykin’s artificial retina is a mosaic of millions of microscopic photoelectric cells. These cells are of light-sensitive metal, formed upon the front of a thin sheet of mica by evaporation of the metal in a vacuum. A metallic coating on the back of the insulating mica sheet, and a silverized portion of the eighteen-inch tube in which the retina is housed, serve as terminals for the electric circuit, which may be regarded as the optic nerve, since it transmits what the retina sees.

But how could the mechanical eye unscramble the impulses from these millions of cells? Some sort of scanning was necessary, and Dr. Zworykin found an entirely new way to do this. He housed his retina in a cathode ray tube, which hurls a narrow beam of electrons at the mosaic of photo cells. Taking advantage of the fact that a cathode beam can be deflected by magnets, Dr. Zworykin enclosed the tube in a yoke of four electromagnets that swing the beam back and forth across the retina at twenty miles a minute!

While this is happening, photo cells are electrically charged wherever they are exposed to light. The moment the moving cathode beam shines upon a light-struck cell, it discharges it of electricity as a trigger fires a gun. The result is a sudden fluctuation in the voltage of the electric circuit common to all the cells. In this way each of the millions of cells waits its turn to go on the air and report on the lightness or darkness of its sector of the picture. As a result the image is transformed into a stream of electrical impulses that can be put on the air by a radio transmitter.

So rapidly does this take place that the entire picture is scanned twenty times a second. In the waiting period before it goes on the air, each cell has time to acquire thousands of times as great a charge as in other systems; it is constantly watching the picture, instead of blinking at it. Hence the new iconoscope is able to work outdoors and indoors in light that would have been considered impossible for television a few days ago; in fact, in any light where an ordinary camera could take pictures. If you were first to hear the explanation of this involved principle and then to see the instrument, you would be amazed at its compactness and the simplicity of its operation.

What type of television receiver will be designed for the home? Particularly adapted for use with the iconoscope is a receiver developed by Dr. Zworykin several years ago, and called the ”kinescope.” It employs a cathode-ray tube like that of the transmitter, except that the retina is replaced by a window of fluorescent material that glows wherever the cathode beam strikes it. Electromagnets swing this beam exactly in step with that of the transmitter. The intensity of the beam itself, meanwhile, is made to fluctuate by the radio impulses coming over the air. Thus the speeding beam retraces the image in highlights and shadows on the glowing window of the tube. Sitting before the instrument, the owner will see a moving picture about four by five inches in size, which may be magnified if desired, and he will watch faraway events as if he were there in person.

From start to finish, in this system, there is no mechanical moving part. Even the pulsating currents that operate the electromagnets in transmitter and receiver are generated by vacuum tubes of special design. There is no reason why any television receiver of conventional design cannot also be adapted for use with the iconoscope, including the existing types that will project a picture large enough for a theater screen. It is even possible to imagine a new kind of theater, entertaining its patrons with news flashes of world events happening at that very moment, instead of exhibiting newsreels made hours or days before.

Thus at one stroke the new invention brings television to the point where it may be ready, at last, for home and public entertainment. With that achieved, there will be time enough to develop other possibilities of the new mechanical eye in war and peace, industry and science—such possibilities as to set it at the eyepiece of a microscope more powerful than man has ever looked through, illuminated by invisible ultraviolet light, to reveal wonders hitherto seen only by photography. As with any other great invention, no one can foresee all the avenues to new marvels that it may open.