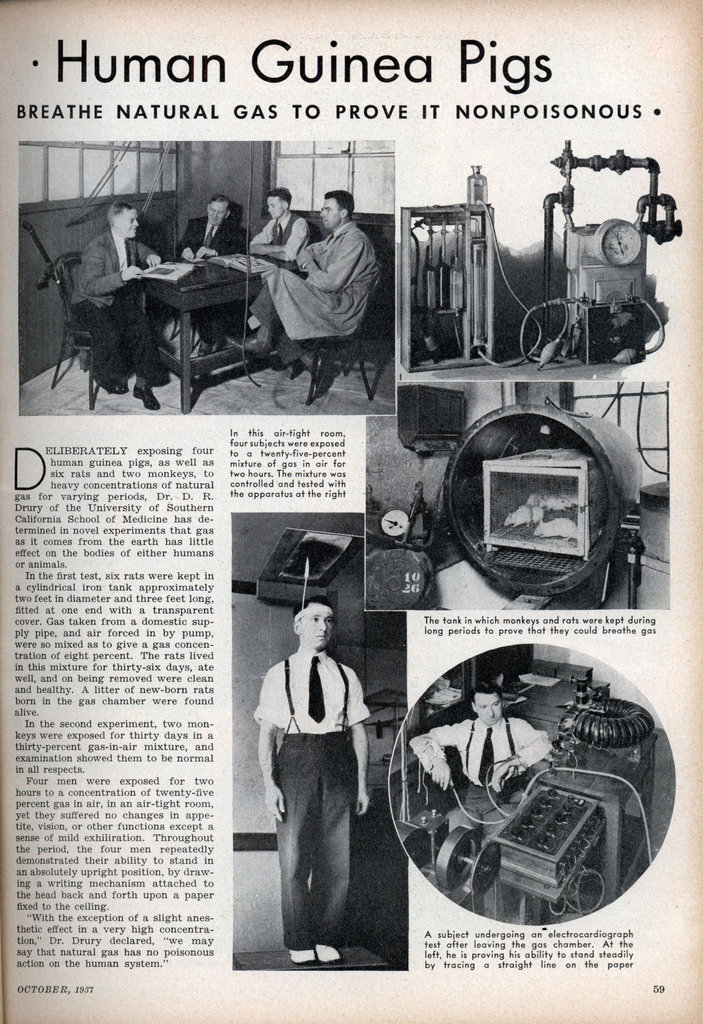 DELIBERATELY exposing four human guinea pigs, as well as six rats and two monkeys, to heavy concentrations of natural gas for varying periods, Dr. D. R. Drury of the University of Southern California School of Medicine has determined in novel experiments that gas as it comes from the earth has little effect on the bodies of either humans or animals.

In the first test, six rats were kept in a cylindrical iron tank approximately two feet in diameter and three feet long, fitted at one end with a transparent cover. Gas taken from a domestic supply pipe, and air forced in by pump, were so mixed as to give a gas concentration of eight percent. The rats lived in this mixture for thirty-six days, ate well, and on being removed were clean and healthy. A litter of new-born rats born in the gas chamber were found alive.

In the second experiment, two monkeys were exposed for thirty days in a thirty-percent gas-in-air mixture, and examination showed them to be normal in all respects.

Four men were exposed for two hours to a concentration of twenty-five percent gas in air, in an air-tight room, yet they suffered no changes in appetite, vision, or other functions except a sense of mild exhiliration. Throughout the period, the four men repeatedly demonstrated their ability to stand in an absolutely upright position, by drawing a writing mechanism attached to the head back and forth upon a paper fixed to the ceiling, “With the exception of a slight anesthetic effect in a very high concentration,” Dr. Drury declared, “we may say that natural gas has no poisonous action on the human system.”