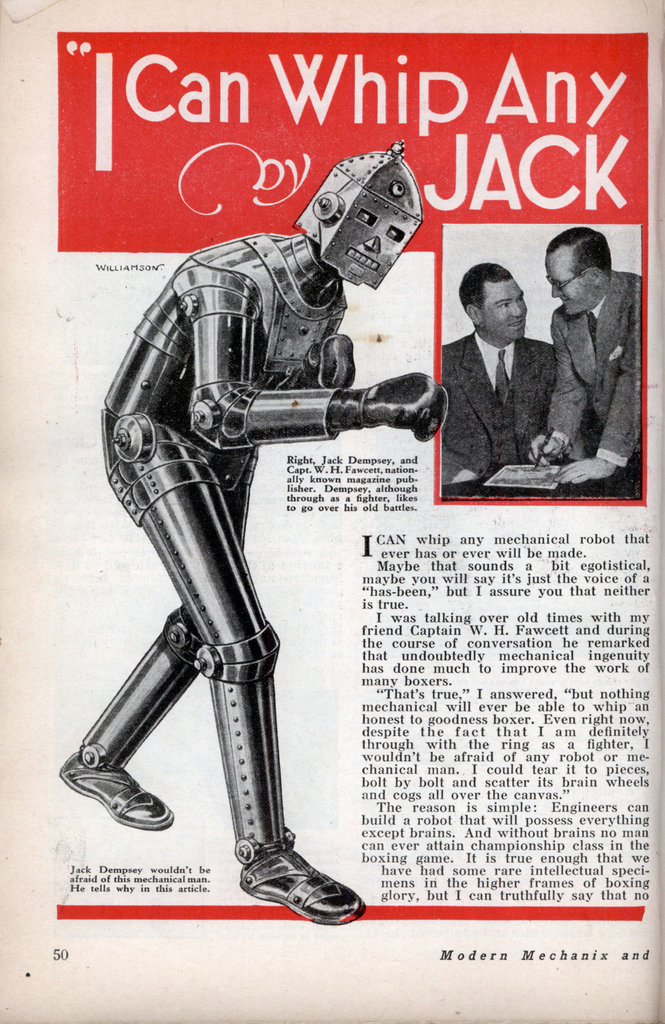 The reason is simple: Engineers can build a robot that will possess everything except brains. And without brains no man can ever attain championship class in the boxing game. It is true enough that we have had some rare intellectual specimens in the higher frames of boxing glory, but I can truthfully say that no man ever attained genuine boxing recognition without real headwork. The best punch in the world is not worth a whoop if the boxer doesn’t know what to do with it. The most damaging of all blows is the short, straight-arm punch to the solar plexusâ€”the punch which came into being when Fitzsimmons took the championship from Jim Corbett in one of the boxing-game’s greatest surprise victories.

In hitting to the solar plexus, that spot just below the meeting point of the ribs, the blow travels only about six or eight inches and the result is comparable only to the terrific effect of being struck by a piston which moves forward as its arm slides out. There never has been and never will be a boxer who could remain on his feet after being struck by a mechanically perfect solar plexus punch.

Another blow, almost equally devastating, is the left hook to the “button.” This likewise travels only about six inches, but the impulse for this blow comes from the body as it moves forward, pivoting slightly at the hips. When, with the piston’s hard-driving precision, the fist and elbow turn instantly to travel over that six-inch span to the point of contact, the fighter’s previous forward motion gives him the greatest power it is possible for a human to achieve in the ring. If this blow meets its victim properly, the man who delivered it can turn away for the dressing room while the counting starts. He need not fear that his opponent will get up.

It was the left hook with which I dropped Luis Firpo three times in the first round when we met in New York back in 1923. And it was this same hard wallop that put the Wild Bull of the Pampas to sleep for good when the second round was but 58 seconds gone.

There are other parallels, too, between mechanics and boxing. The old lever principle governs the action of three primary blows known to every ring fan: the jab, the right cross and the upper-cut. In each of these blows the body acts more or less as an axis as the punches are delivered by a fighter in forward motion.

Any boxer’s success depends to a great extent on just how efficiently he is able to apply mechanical principles to his fighting. As an example, every blow I have delivered in my boxing career, with the exception of those used in infighting and designed only to war down an opponent, was intended to be a “perfect” punch. Those that fell short of perfection and failed to bring down my man failed because they were blocked or because the human eye and arm did not coordinate to achieve the highest degree of efficiency.

The piston, to illustrate, drives at exactly the same spot in the same groove with only the most minute variance. The same cannot be said for the hitting arm of a boxer, except insofar as he is able to keep his “machine” in such excellent condition that it is always ready to carry out the telegraphic instructions from his brain.

I’ll venture to say, despite the fact that mechanics and boxing are based on the same principles, that the average clever boxer, facing a robot constructed with two or three vulnerable points, could leave such a creature in the trash heap. For no matter how perfect the machine might be, it lacks a brain, and the most killing of all blows is worthless when not delivered at just the crucial second.

Mechanical principles govern boxing only because man has realized the advantage through his study of science and harnessed these principles.