Popular Mechanics
Issue: Jan, 1958
Posted in: History, Sign of the Times
Tags: Russia, russian autos
No Comments on I DROVE THROUGH RUSSIA (Jan, 1958) 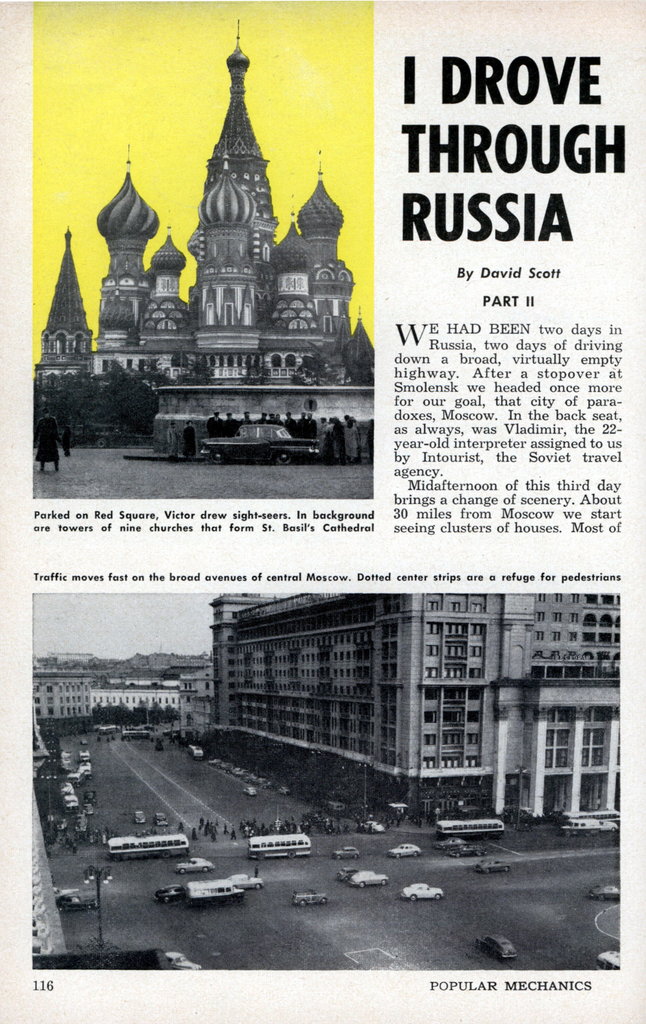 I DROVE THROUGH RUSSIA

WE HAD BEEN two days in Russia, two days of driving down a broad, virtually empty highway. After a stopover at Smolensk we headed once more for our goal, that city of paradoxes, Moscow. In the back seat, as always, was Vladimir, the 22-year-old interpreter assigned to us by Intourist, the Soviet travel agency.

Midafternoon of this third day brings a change of scenery. About 30 miles from Moscow we start seeing clusters of houses. Most of them are wooden shanties, but every one sprouts a TV antenna. Occasionally we pass a factory. At the city outskirts, huge apartment houses stand amid a forest of building cranes. Then the traffic really startsâ€”few cars, but an endless stream of green trucks, like an army on the move.

New impressions tumble in. The road is being sprinkled by water tankers, then swept by mechanical brushes to clean up the muddy tracks deposited by trucks from adjacent building sites. Vladimir tells us you can be fined for driving a dirty car in Moscow. It’s also an offense to blow your horn or drop a cigarette butt in the street.

Our first stop on this broad belt of concrete is for a bewildering set of four traffic lights. Normally you can turn right on red, but a left-turn is allowed only on a double green light. Overhead hangs a row of circular signs indicating lanes, prohibited vehicles, permitted turns and other regulations. The usual system for left-turns on main avenues is to proceed straight across an intersection to the U-turn sign halfway up the block, then swing around into the oncoming traffic and cut across to be in position for the next right-turn.

In the center of the city there’s a running battle between cars and pedestrians, although the Muscovite walker (usually runner) stranded in midstream has enough sense to stand dead still as the traffic rushes past him. It’s a rat race to the uninitiated, but the militiamen (Russian for cops) seem unconcerned. Immaculately garbed in military-type uniforms, they often control traffic merely with a jerk of the head or repeated whistle blasts. Experiencing this continuous war of man vs. machine, we recalled the laconic advice of the English-language guide to motorists in the U.S.S.R.: “When necessary, the car should be stopped in time to avoid an accident.”

At the vast permanent Agricultural and Industrial Exhibition in Moscow we had a close look at the cars the Russian can buy. Most popular is the four-seater Moskvitch.

Similar in appearance to more than one British model and costing the ruble equivalent of $1500. This represents more than one year’s average wages and must be paid in cashâ€”there’s no consumer credit. Outwardly the car is conventional, with integral body-chassis, a 35-horsepower L-head engine and three-speed manual transmission. Radio and heater are standard.

Beneath the surface the Moskvitch bristles with features that reflect the arduous Soviet driving conditions and weather. For example, the engine has two separate oil filters and a radiator shutter. A towing hook is fitted in case you get bogged down, and the seats fold flat to form a double bed for when you’re stranded miles from nowhere. The toolkit ‘would equip a small garage, including no fewer than 20 different wrenches.

We also had a look at the larger Volga that sells for $3000. It is powered by one of Russia’s first overhead-valve gas engines a four-cylinder unit rated at 70 horsepower. Initially it was to have an automatic transmission, but this gave so much trouble that the idea was shelved. It is a pleasantly styled machineâ€”a compromise between American and European designs.

A visit to the Moskvitch plant gave us a glimpse of how the Soviets make cars. Daily output there is 185, amounting to half the country’s total annual production of 110,000 units. Machinery is modern by European standards, with a considerable number of automatic transfer lines for the engine block and cylinder head, manifold, transmission housing and other large components. Automation is applied widely to special-purpose machines for making smaller parts such as pistons and universal joints.

Russia’s production figure for trucks is more impressive, since the country’s transport system relies heavily on fleets of rugged machines. Almost all these trucks are heavy-duty jobs with pay-load ratings from 2-1/2 to 40 tons, and current output is some 370,000 a year. Although this is only about half of America’s production in the same load category, it is over three times the combined output of Britain, West Germany and France.

At the ZIL plant in Moscow we saw one four-tonner or a heavier six-by-six version rolling off the assembly lines every 2-1/2 minutes. Over 20 automatic lines are used for machining engine and transmission parts, and production is keyed to a high pitch. In addition to trucks, the factory turns out 11 coaches a day, with 1500 bicycles and 30 refrigerators as sidelines. I was struck by the number of women workers (nearly a third of the 40,000 employees), and especially by the way they held every type of man’s job.

I had a unique chance at both these factories to sample personally the Russians’ technical proficiency and zeal, since the Victor reached Moscow somewhat bruised after an accident. Near-disaster had struck us in the middle of Poland â€” a country where travelers to Russia must reckon with peasants asleep at the reins of horse-drawn carts, small children teetering about on man-sized bicycles, animals grazing along the roadway and other hazards.

This time it was a woman on a bicycle who cut across my path just as I was about to overtake her. Despite frantic horn blasts and shrieking tires she never once looked around. Braking furiously and swinging far to the left in a flanking movement, I hit her. She rolled over the hood, snapped the radio antenna, smashed the windshield and bounced forward in a series of somersaults on the road. By some miracle she was not killedâ€”not even any bones broken.

Shaken, but glad to have escaped so lightly, we had driven on slowly to Warsaw with the wind buffeting our faces. A Warsaw garage had fastened a flat piece of plastic in place to serve as a windshield, but the wrap-around corners remained exposed to the elements. At the end of 800 drafty miles it was heartening to find in Moscow a cable from the Vauxhall factory in England (which had loaned me the car) announcing that a new piece of glass was on the way.

Before it arrived we visited the ZIL factory where the chief engineer insisted that his experimental shop improve the repair, despite my protests that a replacement windshield was coming by air. At the end of the day the Victor was returned to us looking almost like new. Corner sections of plastic had been shaped and bent in the complex form for a perfect fit. A new headlight unit was installed and the whip antenna brazed on. Touch-up paint covering body scratches exactly matched the unusual shade of red. As a bonus, the car was washed and greased. After collecting the new windshield from the airport we hopefully took it with us to the Moskvitch plantâ€”but there was no need to ask, they offered to put it in.

These small examples of technical enterprise link up with the success of projects such as the earth satellite in this formerly backward country. On different scales, both represented a challenge to Russians who from childhood had been steeped in science as the key to their future.

This was dramatized for me in Moscow’s Polytechnical Museum, where 20,000 examples of working models of modern machinery and equipment are crammed into 50 halls and sections: gas turbines, blast furnaces, hydroelectric power stations and electronic computers. When I went there it was filled with conducted groups of school children, and it was an eye opener to see 10-year-old girls in pigtails intently studying a steel-rolling mill or complicated machine tools.

I had another glimpse of this scientific fervor when I visited the offices of Tekhnika Molodezhi (Technology for the Young). Backed by state funds, this monthly has a half-million circulation â€” limited only by paper supplies. It presents advanced developments, such as in nuclear physics or high-speed metal-cutting with ceramic tools, in simple terms and with humorous cartoons. A few years ago science fiction was shunned as “unrealistic,” but now there is a special “Fantastic Editor” concerned with stories about rocketships and interplanetary travel.

The last thing we saw on the Moscow sky line as we drove westward was the tower above the 32-story “Palace of Science”â€”claimed to be the tallest building in Europe. This is the new university, conceived on a massive scale with 150 lecture halls and 1000 laboratories to take care of 17,000 students. But the paradoxes of Russia re-emerged with the first sight of the wooden shacks and broken-down trucks.

Politics aside, this country with nearly three times the area of America appears to have the pioneering spirit of the Midwest 100 years ago, along with a massive appetite for 20th-century technology.