Mechanix Illustrated
Issue: Mar, 1949
Posted in: General
No Comments on I Walked Through FIRE (Mar, 1949) 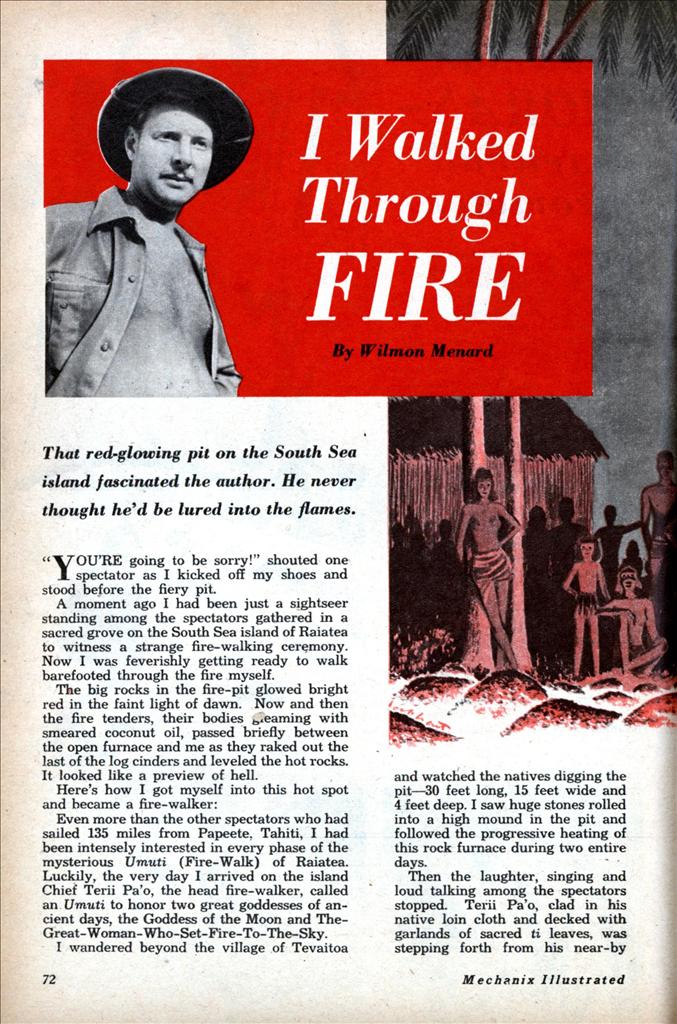 I Walked Through FIRE

That red-glowing pit on the South Sea island fascinated the author. He never thought he’d be lured into the flames.

“YOU’RE going to be sorry!” shouted one spectator as I kicked off my shoes and stood before the fiery pit.

A moment ago I had been just a sightseer standing among the spectators gathered in a sacred grove on the South Sea island of Raiatea to witness a strange fire-walking ceremony. Now I was feverishly getting ready to walk barefooted through the fire myself.

The big rocks in the fire-pit glowed bright red in the faint light of dawn. Now and then the fire tenders, their bodies gleaming with smeared coconut oil, passed briefly between the open furnace and me as they raked out the last of the log cinders and leveled the hot rocks. It looked like a preview of hell.

Here’s how I got myself into this hot spot and became a fire-walker: Even more than the other spectators who had sailed 135 miles from Papeete. Tahiti, I had been intensely interested in every phase of the mysterious Umuti (Fire-Walk) of Raiatea. Luckily, the very day I arrived on the island Chief Terii Pa’o, the head fire-walker, called an Umuti to honor two great goddesses of ancient days, the Goddess of the Moon and The-Great-Woman-Who-Set-Fire-To-The-Sky.

I wandered beyond the village of Tevaitoa and watched the natives digging the pit—30 feet long, 15 feet wide and 4 feet deep. I saw huge stones rolled into a high mound in the pit and followed the progressive heating of this rock furnace during two entire days.

Then the laughter, singing and loud talking among the spectators stopped. Terii Pa’o, clad in his native loin cloth and decked with garlands of sacred ti leaves, was stepping forth from his near-by coconut palm temple. All eyes stared at the handsome chief as he slowly waved his ti-leaf wand and led off the fire-walking procession.

He turned, caught my eye and smiled. Once we had sailed aboard a schooner together to Anaa, an atoll in the Dangerous Archipelago known for its pearl-rich waters. I had presented him with a can of salmon and we had become good friends.

Now the spectators swarmed about Terii Pa’o and closely inspected his feet to see if they had been coated or specially treated to be protected against the intense heat of that rock furnace. He grinned indulgently at their thorough examination.

I saw one of the tourists turn away and walk to the edge of the fiery pit. He gazed at the open furnace for a few seconds. Then, with a groan, he covered his face with his hands and backed off. His neck and face turned scarlet, his eyes glazed and streamed with tears.

Another tourist took a long look and dropped a handkerchief upon the rocks.

Instantly it seared and turned to a gray powder.

Chief Terii Pa’o, with head high and eyes uplifted to the sky, walked up to the fire-pit with his swaying branch of ti leaves. He struck the rocks three times with his ti wand, then began chanting the ancient fire-walking prayer. Knowing the Tahitian tongue, I listened closely: “O being (spirits) who enchant the fire-pit, let it die out for a while! O dark earthworms! O light earthworms! Fresh water and salt water, heat of the fire-pit, darkening of the fire-pit, hold up the footsteps of the walkers and fan the heat of the bed. O cold host, let us linger in the midst of the fire-pit. O Great-Woman-Who-Set-Fire-To-The-Skies, hold the fan and let us go into the fire-pit for a little while!”

Then followed a measured cant of the ten first steps to be made upon the fiery pit. Finally, Terii Pa’o uttered a loud and exultant shout: “O Great-Woman-Who-Set-Fire-To-The-Sky! All is covered!”

I shall never forget the great sigh and then the hush that followed Terii Pa’o’s first step upon the pit. He hesitated a moment, as if to be sure that the stones Would not shift under his weight. Then, proudly he walked onto the glowing bed of rocks.

The tourists gasped. The natives sat stiffly erect, unmoving. They seemed to be in a trance.

Terii Pa’o walked once more across the pit and then turned and recrossed it. His followers formed a line behind him upon his return. Again, Terii struck the stones with the ti leaves. Then, followed by a single-file procession of his assistants, he’ walked with firm steps across the center of the fire-pit.

I could see the heat waves shimmering above their heads, but there was no odor of burning flesh, as I half-expected. They had traversed the pit now, and Terii raised his ti leaves, the signal for the column of walkers to face about and march back through the fire.

They walked across the pit three times!

After the third crossing, Terii stopped a short distance from the furnace and cried: “Atira! Enough!”

Then, abruptly he turned and crawled across the 30-foot expanse of glowing stones on his stomach!

At the other side of the pit, he stood up and beckoned to the tourists to make their inspection. One of them placed his palm to the soles of Terii’s feet and marveled that they were “cold.” The feet of the fire-walkers were not even marked by their passage through the burning pit. The examination over, the tourists withdrew, baffled by the miraculous defiance of fire.

Terii then turned to the gaping natives and urged those afflicted with physical or mental pain, needing spiritual purification or wishing to test their courage against fire: “Follow me across the fire-pit!”

Passing close to me, he caught my eye again and grinned: “Perhaps you would like to walk behind me? You have lived long in our islands and understand our customs and ceremonies. But, if you are afraid, it would be dangerous to attempt the fire-walk.”

It was his challenging remark on my courage that compelled me to risk a walk through the fire and made me kick off my shoes and cry: “Haere outou! Let’s go!”

With a show of bravery I didn’t feel, I stepped into line behind Terii.

My bravado shrank with every step. I was badly frightened and cursed the impulse that made me accept Terii’s challenge to follow him through the fire.

My throat throbbed taut and dry and my stomach felt like a nest of crazy butterflies. My heart hammered violently, my head ached.

I’ve always had a fear of fire and now I shuddered as I stared with nightmarish fascination at the searing fire-pit ahead. I no longer cared what Terii and all those spectators might say—I wanted to bolt.

But the priest behind me gave my shoulders a gentle shove. Terii had started!

I gritted my teeth and groaned. Mechanically I stepped forward. My legs were numb and leaden. I felt like a moth lured helplessly toward a flame.

Then my bare feet touched something uneven and elevated. Suddenly countless tiny electric shocks needled the soles of my feet.

I felt that I made a sorry, trembling figure treading behind Terii. Oppressive heat waves shimmered before my fixed gaze, and forced me to half-close my eyes. A sudden blast of heat all but suffocated me. My lungs became filled with burning-hot air. A moment more of this choking heat and I would smother.

Then, all at once, the prickly sensation on the bottom of my feet ceased, and I knew that I had crossed the fire-pit. I glanced down at my feet. They were untouched! Every pore of my body was oozing sweat. I could see that Terii’s broad back was streaming with perspiration, too.

Terii raised his branch of ti leaves, the signal that the last man had passed over the pit and that everyone must now swing right- about-face for the return transit. I knew that I could not stand another walk across the hot stones. I stepped quickly out of line. Terii smiled and gave me an understanding pat on the shoulders. Quickly I was surrounded by the tourists, who lifted my feet and wiped away the dirt to search for blisters. There were none. The natives shouted, “Maitai roa! Very good!”

Can the fire-walkers really invoke some mysterious power to make their bodies safe against flame? Emotionally I experienced intense anguish but physically I was untouched. Several white men who have tried fire-walking have been horribly burned. Other fire-walkers have suffered no discomfort at all. Perhaps the fascination of the fiery pit and the strange ritual exert some hypnotic effect so that for the moment the body becomes completely numbed to pain.

I’m not sorry I accepted Terii’s challenge and braved the fire-pit. Now I know how it feels to walk through fire. It’s an eerie, terrifying experience, this fire-walking—and I’ll never do it again. But I’m still trying to figure out why I didn’t get burned! •