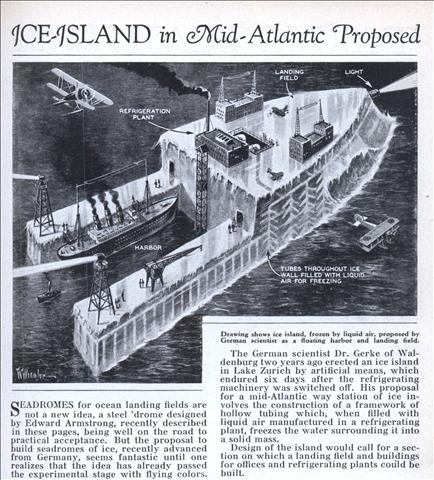 SEADROMES for ocean landing fields are not a new idea, a steel ‘drome designed by Edward Armstrong, recently described in these pages, being well on the road to practical acceptance. But the proposal to build seadromes of ice, recently advanced from Germany, seems fantastic until one realizes that the idea has already passed the experimental stage with flying colors.

The German scientist Dr. Gerke of Waldenburg two years ago erected an ice island in Lake Zurich by artificial means, which endured six days after the refrigerating machinery was switched off. His proposal for a mid-Atlantic way station of ice involves the construction of a framework of hollow tubing which; when filled with liquid air manufactured in a refrigerating plant, freezes the water surrounding it into a solid mass.

Design of the island would call for a section on which a landing field and buildings for offices and refrigerating plants could be built.