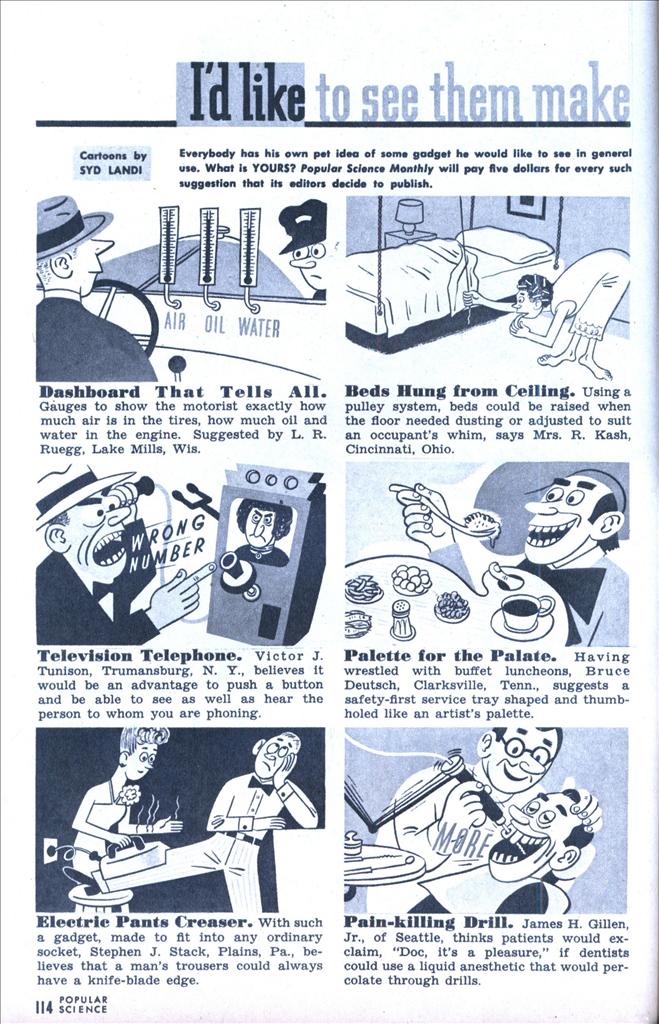 Everybody has hit own pot idea of some gadget he would like to see in general use. What is YOURS? Popular Science Monthly will pay five dollars for every such suggestion that its editors decide to publish.

Dashboard That Tells All.
Gauges to show the motorist exactly how much air is in the tires, how much oil and water in the engine. Suggested by L. R. Ruegg, Lake Mills, Wis.

Beds Hung from Ceiling. Using a pulley system, beds could be raised when the floor needed dusting or adjusted to suit an occupant’s whim, says Mrs. R. Kash, Cincinnati, Ohio.

Television Telephone. Victor J. Tunison, Trumansburg, N. Y., believes it would be an advantage to push a button and be able to see as well as hear the person to whom you are phoning.

Palette for the Palate. Having wrestled with buffet luncheons, Bruce Deutsch, Clarksville, Tenn., suggests a safety-first service tray shaped and thumb-holed like an artist’s palette.

Electric Pants Creaser. With such a gadget, made to fit into any ordinary socket, Stephen J. Stack, Plains, Pa., believes that a man’s trousers could always have a knife-blade edge.

Pain-killing Drill. James H. Gillen, Jr., of Seattle, thinks patients would exclaim, “Doc, it’s a pleasure,” if dentists could use a liquid anesthetic that would percolate through drills.