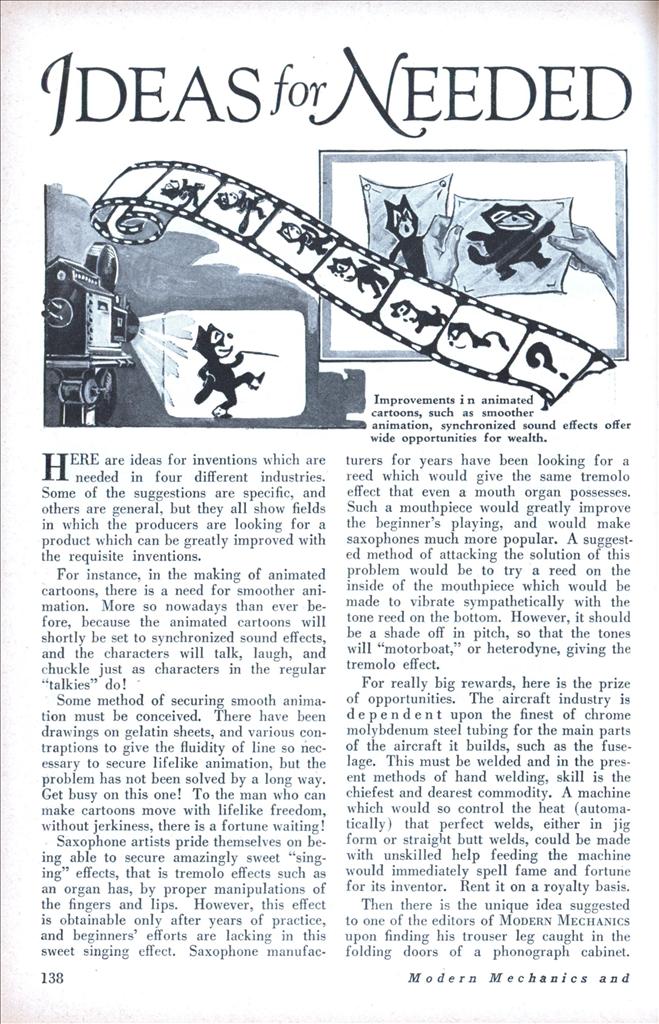 Here are four ideas which are capable of being developed into inventions which will fill crying needs in four different industries. Each is widely applicable and should net comfortable fortunes to the man who ultimately perfects them.

HERE are ideas for inventions which are needed in four different industries. Some of the suggestions are specific, and others are general, but they all show fields in which the producers are looking for a product which can be greatly improved with the requisite inventions.

For instance, in the making of animated cartoons, there is a need for smoother animation. More so nowadays than ever before, because the animated cartoons will shortly be set to synchronized sound effects, and the characters will talk, laugh, and chuckle just as characters in the regular “talkies” do!

Some method of securing smooth animation must be conceived. There have been drawings on gelatin sheets, and various contraptions to give the fluidity of line so necessary to secure lifelike animation, but the problem has not been solved by a long way. Get busy on this one! To the man who can make cartoons move with lifelike freedom, without jerkiness, there is a fortune waiting!

Saxophone artists pride themselves on being able to secure amazingly sweet “singing” effects, that is tremolo effects such as an organ has, by proper manipulations of the fingers and lips. However, this effect is obtainable only after years of practice, and beginners’ efforts are lacking in this sweet singing effect. Saxophone manufacturers for years have been looking for a reed which would give the same tremolo effect that even a mouth organ possesses. Such a mouthpiece would greatly improve the beginner’s playing, and would make saxophones much more popular. A suggested method of attacking the solution of this problem would be to try a reed on the inside of the mouthpiece which would be made to vibrate sympathetically with the tone reed on the bottom. However, it should be a shade off in pitch, so that the tones will “motorboat,” or heterodyne, giving the tremolo effect.

For really big rewards, here is the prize of opportunities. The aircraft industry is dependent upon the finest of chrome molybdenum steel tubing for the main parts of the aircraft it builds, such as the fuselage. This must be welded and in the present methods of hand welding, skill is the chiefest and dearest commodity. A machine which would so control the heat (automatically) that perfect welds, either in jig form or straight butt welds, could be made with unskilled help feeding the machine would immediately spell fame and fortune for its inventor. Rent it on a royalty basis.

Then there is the unique idea suggested to one of the editors of Modern Mechanics upon finding his trouser leg caught in the folding doors of a phonograph cabinet.