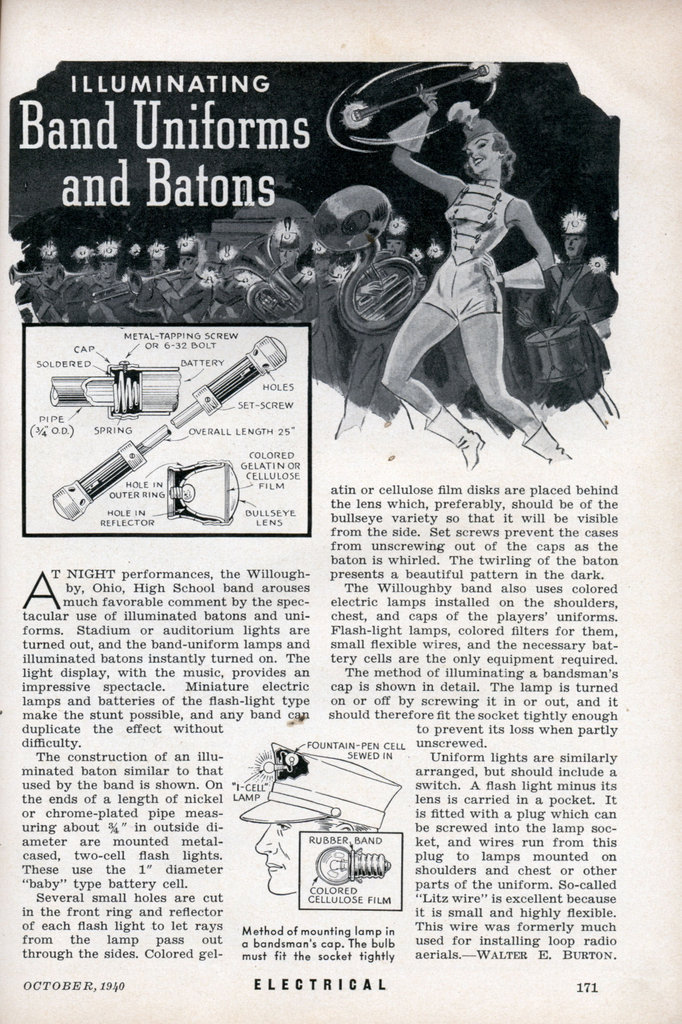 AT NIGHT performances, the Willoughby, Ohio, High School band arouses much favorable comment by the spectacular use of illuminated batons and uniforms. Stadium or auditorium lights are turned out, and the band-uniform lamps and illuminated batons instantly turned on. The light display, with the music, provides an impressive spectacle. Miniature electric lamps and batteries of the flash-light type make the stunt possible, and any band can duplicate the effect without difficulty.

The construction of an illuminated baton similar to that used by the band is shown. On the ends of a length of nickel or chrome-plated pipe measuring about 3/4″ in outside diameter are mounted metal-cased, two-cell flash lights. These use the 1″ diameter “baby” type battery cell.

Several small holes are cut in the front ring and reflector of each flash light to let rays from the lamp pass out through the sides. Colored gelatin or cellulose film disks are placed behind the lens which, preferably, should be of the bullseye variety so that it will be visible from the side. Set screws prevent the cases from unscrewing out of the caps as the baton is whirled. The twirling of the baton presents a beautiful pattern in the dark.

The Willoughby band also uses colored electric lamps installed on the shoulders, chest, and caps of the players’ uniforms. Flash-light lamps, colored filters for them, small flexible wires, and the necessary battery cells are the only equipment required.

The method of illuminating a bandsman’s cap is shown in detail. The lamp is turned on or off by screwing it in or out, and it should therefore fit the socket tightly enough to prevent its loss when partly unscrewed.

Uniform lights are similarly arranged, but should include a switch. A flash light minus its lens is carried in a pocket. It is fitted with a plug which can be screwed into the lamp socket, and wires run from this plug to lamps mounted on shoulders and chest or other parts of the uniform. So-called “Litz wire” is excellent because it is small and highly flexible. This wire was formerly much used for installing loop radio aerials.â€”Walter E. Burton.