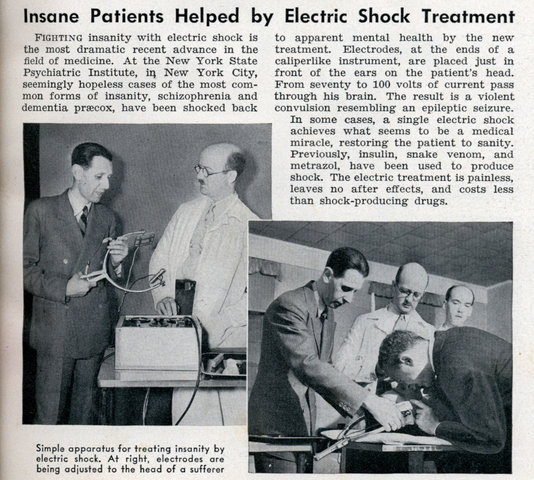 Fighting insanity with electric shock is the most dramatic recent advance in the field of medicine. At the New York State Psychiatric Institute, in. New York City, seemingly hopeless cases of the most common forms of insanity, schizophrenia and dementia praecox, have been shocked back to apparent mental health by the new treatment. Electrodes, at the ends of a caliperlike instrument, are placed just in front of the ears on the patient’s head. From seventy to 100 volts of current pass through his brain. The result is a violent convulsion resembling an epileptic seizure.

In some cases, a single electric shock achieves what seems to be a medical miracle, restoring the patient to sanity. Previously, insulin, snake venom, and metrazol, have been used to produce shock. The electric treatment is painless, leaves no after effects, and costs less than shock-producing drugs.