For a lot more info check out this page on the amazing New York Worlds Fair ’64 site. 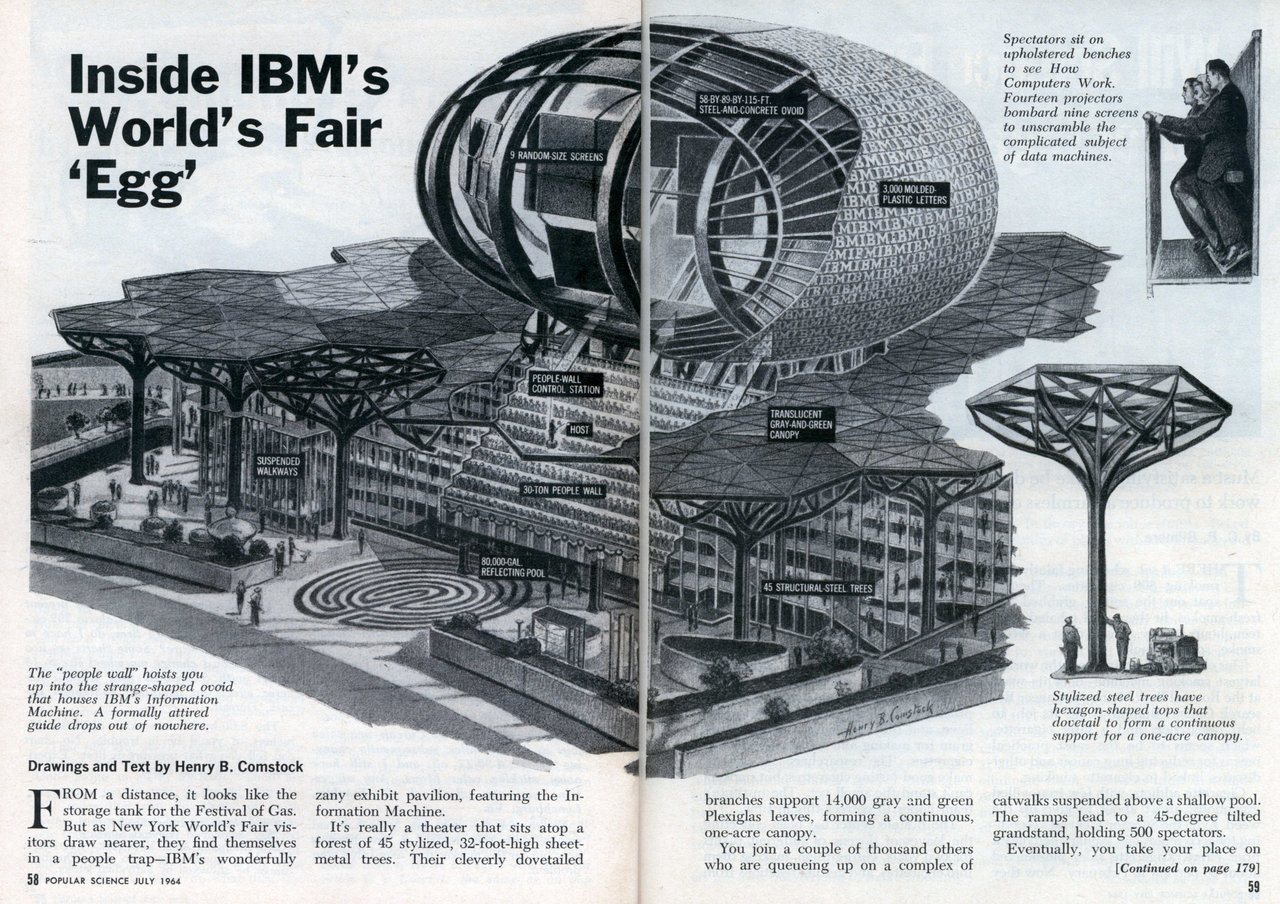 FROM a distance, it looks like the storage tank for the Festival of Gas. But as New York World’s Fair visitors draw nearer, they find themselves in a people trapâ€”IBM’s wonderfully zany exhibit pavilion, featuring the Information Machine.

You join a couple of thousand others who are queueing up on a complex of catwalks suspended above a shallow pool. The ramps lead to a 45-degree tilted grandstand, holding 500 spectators. Eventually, you take your place on what IBM calls the “people wall.” Its 12 tiers of seats are no sooner filled than an M.C. in white tie and tails comes gliding down above you in a “bucket.” He promises that in the next 12 minutes you’ll learn that computers make use of everyday methods we all use in our daily lives to solve complicated problems.

Inside the egg. In a little less than a minute, you’re hydraulically hoisted 53 feet into the main theater. This puts you in the core of the gunite-sprayed steel egg, about the size of a Navy blimpâ€”115 feet long, 89 feet deep, 58 feet from base to top, which is 90 feet high. There, 14 slide and movie projectors bombard nine random-size screens with a very busy show. If the 30-ton people wall returns you to earth still wondering why data-processing machines are useful, it’s no fault of IBM’s.

While the Information Machine dominates the show, you will find the cluster of little booths and exhibits scattered under the canopy equally entertaining. Pinball fanciers are especially attracted to a 14 -1/2-foot-high glass case called a Probability Machine. Inside, 17,000 polyethylene balls, slightly under an inch in diameter, tumble through a maze of rods that divert them haphazardly into 21 chutes at the base. This routine is repeated every 18 minutes. Invariably the balls form the same bell-like “normal distribution curve.”

Puppet-show booths are fashioned after 18th-century prototypes. But the little figures, activated by air cylinders, magnets, bellcranks, and gears, are strictly 1964. So are some skits, which add up to a data-machine strip tease. One theater shows Sherlock Holmes solving a case with computer logic.

There’s also a Scholars Walk where you can bone up on computer lore at displays on handy reading stands.

If you want to see the more tangible “products” of computers, you can inspect and, in some cases, sample a bevy of IBM’s latest contributions to office and industry. Or watch a computer translate Russian into English. Or if you’d like to know what other world-shaking event occurred on your birthday, or any other day in the last 100 years, write the date on a card and watch an electronic Ouija board gobble it up, read the handwriting, and seconds later spell out the banner headline of that day.