Whew! It’s a good thing he took this secret to his grave, otherwise he could have given it to the terrorists and none of our rabbits would be safe! 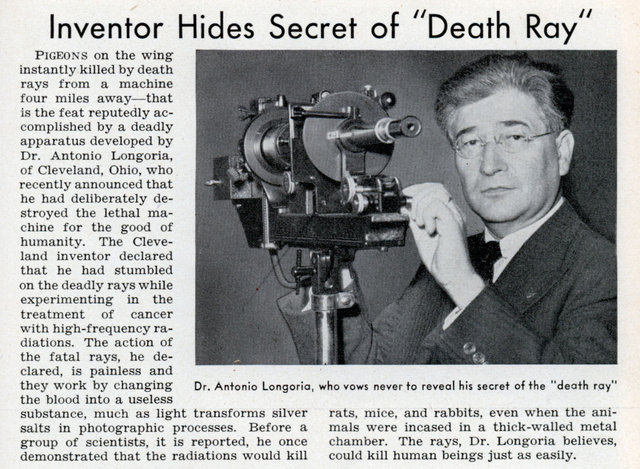 Pigeons on the wing instantly killed by death rays from a machine four miles awayâ€”that is the feat reputedly accomplished by a deadly apparatus developed by Dr. Antonio Longoria, of Cleveland, Ohio, who recently announced that he had deliberately destroyed the lethal machine for the good of humanity. The Cleveland inventor declared that he had stumbled on the deadly rays while experimenting in the treatment of cancer with high-frequency radiations. The action of the fatal rays, he declared, is painless and they work by changing the blood into a useless substance, much as light transforms silver salts in photographic processes. Before a group of scientists, it is reported, he once demonstrated that the radiations would kill rats, mice, and rabbits, even when the animals were incased in a thick-walled metal chamber. The rays, Dr. Longoria believes, could kill human beings just as easily.