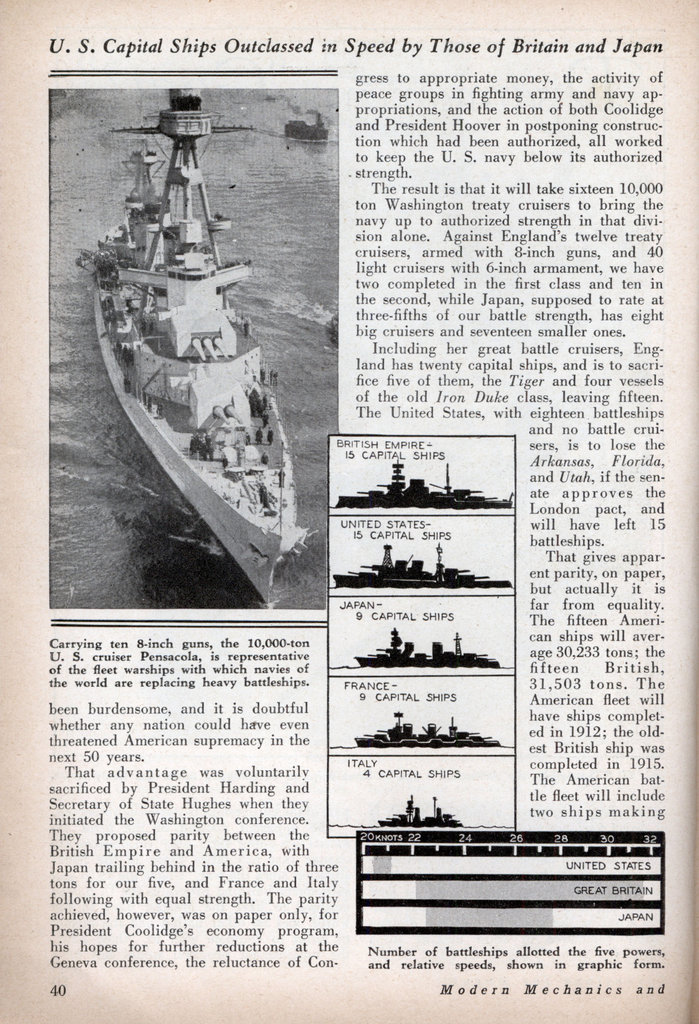 HAS the American navy, in the interest of future world peace, been permanently relegated to a secondary place on the seas? Did the delegation sent to London to bring home naval parity not only return with less than that, but actually sacrifice some of the present American strength under the Washington treaty, in favor of Japan? Those two questions are expected during the next few months to produce as many words in Congress as the late tariff debates. The navy itself is divided on the question. Some admirals and other officers claim to be satisfied with the treaty, and others are outspoken in condemning it.

But, more interesting than whether Uncle Sam is to have a theoretical parity with England, and each major power is to have one and two-thirds the strength of Japan —the old 5-5-3 ratio laid down at Washington some years ago—is the problem of where the world’s navies are- headed, and what future war may be like when they get there.

The present tendency, as a result of the Washington treaty and the London agreements, is away from the battleship and the big battle cruiser. Since the completion of the British battle cruisers Rodney and Hood —the two most powerful warships afloat— no capital ships have been built, and, if the London pacts are approved, none will be built before December, 1936, when another conference is scheduled to consider the question again. If the present treaties are ratified, and another five or six year capital ship holiday should be declared in 1936, all the world’s battleships would be obsolete before it expired, and it is doubtful that they would ever be replaced.

Strangely enough, the capital ship, which is designed solely to fight other warships, is giving way to the cruiser, which is chiefly useful either in guarding commerce routes or attacking commerce, a function which is at direct variance to the American doctrine of the freedom of the seas. With the limitations which are being put on submarines— the other great commerce raider—and on battleships, which are useful only in fleet action, the next war may see fleet scout cruisers scouring the ocean to raid and destroy enemy commerce or seize neutral ships bound for enemy ports in an effort on the part of the belligerents to starve each other out. The apparent passing of the great armored sea-going forts only emphasizes the change that has taken place in the naval situation since the war. Under the 1916 and subsequent building programs the U. S. was destined to have the greatest navy in the world, and no other nation had the money to build to compete with us. Once built, the replacement program would not have been burdensome, and it is doubtful whether any nation could have even threatened American supremacy in the next 50 years.

That advantage was voluntarily sacrificed by President Harding and Secretary of State Hughes when they initiated the Washington conference. They proposed parity between the British Empire and America, with Japan trailing behind in the ratio of three tons for our five, and France and Italy following with equal strength. The parity achieved, however, was on paper only, for President Coolidge’s economy program, his hopes for further reductions at the Geneva conference, the reluctance of Congress to appropriate money, the activity of peace groups in fighting army and navy appropriations, and the action of both Coolidge and President Hoover in postponing construction which had been authorized, all worked to keep the U. S. navy below its authorized . strength.

The result is that it will take sixteen 10,000 ton Washington treaty cruisers to bring the navy up to authorized strength in that division alone. Against England’s twelve treaty cruisers, armed with 8-inch guns, and 40 light cruisers with 6-inch armament, we have two completed in the first class and ten in the second, while Japan, supposed to rate at three-fifths of our battle strength, has eight big cruisers and seventeen smaller ones.

Including her great battle cruisers, England has twenty capital ships, and is to sacrifice five of them, the Tiger and four vessels of the old Iron Duke class, leaving fifteen. The United States, with eighteen battleships and no battle cruisers, is to lose the Arkansas, Florida, and Utah, if the senate approves the London pact, and will have left 15 battleships.

That gives apparent parity, on paper, but actually it is far from equality. The fifteen American ships will average 30,233 tons; the fifteen British, 31,503 tons. The American fleet will have ships completed in 1912; the oldest British ship was completed in 1915. The American battle fleet will include two ships making only 20.5 knots, and the other 13 make but 21 knots. The British fleet will include a 31 knot battle cruiser, two making 31.5 knots—the great Hood and Rodney—5 making 25 knots and 7 of 23 knots. In other words, the seven slowest can steam two knots faster than the best of the U. S. fleet.

Even Japan, limited to nine ships, will have nothing older than 1913, and nothing slower than 22.5 knots, while three of her newest battleships rate 27.5 knots.

The London pact cancels the Washing-tori treaty clause which would have permitted America to lay down four new battleships within the next two years to bring our battle fleet to parity with the British, while requiring us to scrap three ships we now have. Japan, on the other hand, is required to scrap but one vessel, the old Hiyei, which is obsolete and would have been scrapped anyway.

Naval officers who object to the London pact center their protests, however, around the limitation on 10,000 ton, 8-inch gun cruisers, of which we will eventually have 18, if all those permitted are built. The American navy, they claim, needs this class chiefly to protect distant island possessions and scattered trade routes, far removed from naval bases. England, with naval stations in all her far-flung possessions, can use the smaller 6-inch gun ships to advantage, and, in the London pact, the 6-inch gun idea prevails.

The 8-inch naval rifle will throw a greater weight of metal and explosive a greater distance with as great a degree of accuracy as a 6-inch gun. It was 8-inch guns that scored the majority of the hits at Santiago and sank Cevera’s fleet.

Both the British Empire and the United States are to reduce their destroyer tonnage to 150,000, if the treaty is approved. England, with 134 destroyers, will lose little, but the United States, with 309—the greatest destroyer fleet in the world—will have to scrap about 100 of them.

With 122 submarines, against 64 for Japan and 53 for England, we again will be the biggest loser, for all three nations are to reduce to 52,700 tons. As most of the British subs are the small, coast defense type, she will keep about 30 boats, while to save our huge “V” class of 3,500 ton craft we will have quite a few less.

One result of the Washington conference has been the development of a class of so-called treaty cruisers with which no naval expert is altogether satisfied. A warship, experts agree, should have armor protection equivalent to its armament. If it carries 8-inch guns, its side and deck armor should be of sufficient thickness to protect it in a fight with ships similarly armed, fired at normal battle range and striking at the probable angle expected from that range, allowing for the rolling of the ship in a normal sea.

Most of the treaty cruisers have sacrificed armor in favor of bigger guns, longer cruising radius and higher speed. The result is a ship which would be chiefly useful for attacking unarmed or lightly armed merchant vessels, again emphasizing commerce i aiding instead of naval battle. In a fight between warships of equal armament the slower, but heavily armored vessel, will always have the advantage because it can stand up and take punishment while shooting its lightly armored opponent to pieces. The faster vessel can withdraw, it is true, and keep out of range, but it thereby defeats its one reason for being.

The idea that the best defensive was a powerful offensive, which is the basic thought behind the fast, over-gunned and under-armored ship, was exploded by the engagements between the English and German fleets. Admiral Jellico himself pointed out in his book that while England was losing the Good Hope, Monmouth, Queen Mary, Indefatigable, Invincible, Defense and Warrior, German ships, hit far more frequently by gunfire, torpedoes, mines and bombs, were limping home to be repaired so they could fight another day.

The Germans upset all the treaty cruiser calculations a couple of years ago when they launched their “pocket battleship,” the Ersatz-Preussen, a 10,000-ton cruiser armed with 11-inch guns, and a trio of fast light cruisers, the Koenigsburg, Koeln and Karlsruhe, which were quite unlike anything seen in warships before.

Electric welding, to save overlapping plates and tons of rivets, Diesel engines, to cut down the fuel load, and wide use of light weight alloys for machinery and interior fittings, enabled them to build a 10,000-ton cruiser with battleship qualities, including fairly heavy armor and 11-inch guns instead of 8-inch.

That the Ersatz-Preussen is a success, however, is seriously questioned by naval designers. To begin with, it is a compromise ship, designed for two widely different purposes. Its heavy guns and high speed indicate it is intended for use in the Baltic Sea, where only a few obsolete Russian battleships outrank it in offensive power. But its 10,000-mile cruising radius and speed also betoken a commerce raider for distant service. Professor William Hovgaard, at the meeting of the Institute of Naval Architects in Rome last fall, pointed out that the Dutch, because of limited finances, had tried to build a two-purpose warship in the Piet Hein class back in 1894, but soon abandoned the effort as unsatisfactory.

One trouble with the Ersatz-Preussen is that it hasn’t the freeboard for a ship of its speed in the open sea, and, as a platform for 11-inch guns, it may be found to be both wet and unstable.

The Diesel engines, of 50,000 shaft horse power, are twice as powerful as any previous Diesel installation, and therefore something of an experiment, but one which their past experience with Diesels enables the Germans to make with more assurance than any other nation might have.