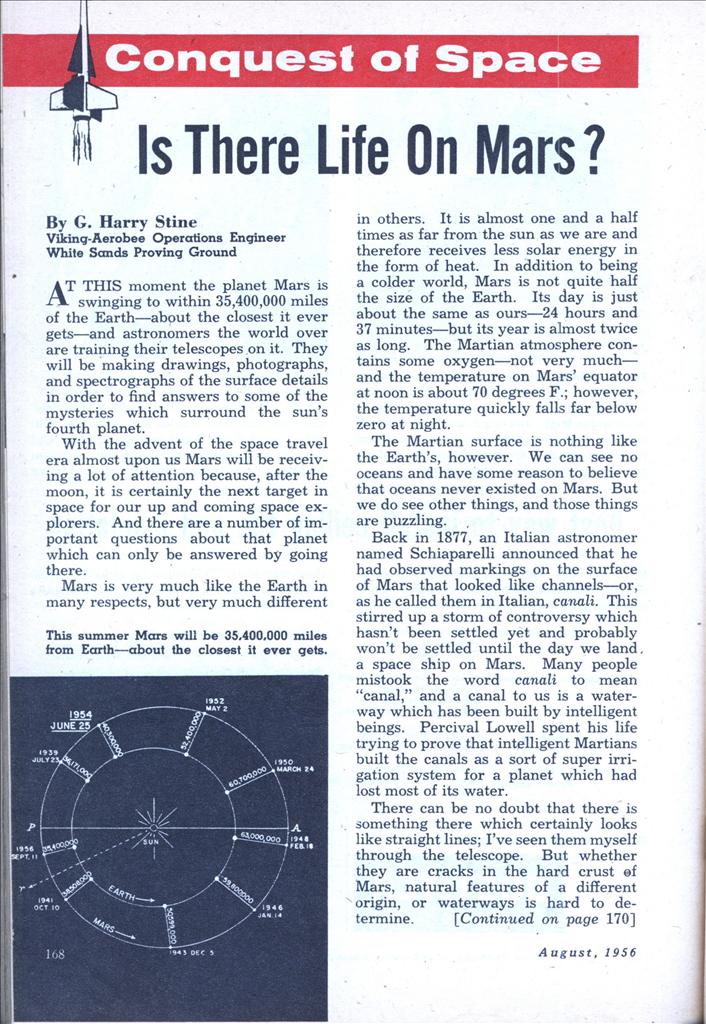 Is There Life On Mars?

Viking-Aerobee Operations Engineer White Sands Proving Ground AT THIS moment the planet Mars is swinging to within 35,400,000 miles of the Earth—about the closest it ever gets—and astronomers the world over are training their telescopes on it. They will be making drawings, photographs, and spectrographs of the surface details in order to find answers to some of the mysteries which surround the sun’s fourth planet.

With the advent of the space travel era almost upon us Mars will be receiving a lot of attention because, after the moon, it is certainly the next target in space for our up and coming space explorers. And there are a number of important questions about that planet which can only be answered by going there.

Mars is very much like the Earth in many respects, but very much different in others. It is almost one and a half times as far from the sun as we are and therefore receives less solar energy in the form of heat. In addition to being a colder world, Mars is not quite half the size of the Earth. Its day is just about the same as ours—24 hours and 37 minutes—but its year is almost twice as long. The Martian atmosphere contains some oxygen—not very much— and the temperature on Mars’ equator at noon is about 70 degrees F.; however, the temperature quickly falls far below zero at night.

The Martian surface is nothing like the Earth’s, however. We can see no oceans and have some reason to believe that oceans never existed on Mars. But we do see other things, and those things are puzzling.

Back in 1877, an Italian astronomer named Schiaparelli announced that he had observed markings on the surface of Mars that looked like channels—or, as he called them in Italian, canali. This stirred up a storm of controversy which hasn’t been settled yet and probably won’t be settled until the day we land, a space ship on Mars. Many people mistook the word canali to mean “canal,” and a canal to us is a waterway which has been built by intelligent beings. Percival Lowell spent his life trying to prove that intelligent Martians built the canals as a sort of super irrigation system for a planet which had lost most of its water.

There can be no doubt that there is . something there which certainly looks like straight lines; I’ve seen them myself through the telescope. But whether they are cracks in the hard crust of Mars, natural features of a different N origin, or waterways is hard to de- You can find proponents for all three theories.

But another astounding Martian feature which ties into the canal problem is the change which takes place on the Martian surface. When Spring conies to the northern hemisphere of Mars, the prominent polar cap begins to shrink and a very unusual phenomenon takes place. A cloak of greenish-purple begins to spread southward across the Martian surface, turning the reddish-ochre desert areas different shades of green. Sometimes it follows the lines of the canals, spreading out from them. It avoids some areas altogether.

Most astronomers seem to think that this color is due to some type of vegetation. Most of them are willing to admit that conditions on Mars—temperature, air pressure, etc.—would allow such simple plant forms as lichens or mosses. They admit that it may be due to something which is not life as we know it. But there they stop cold.

They go on to point out that the surface conditions of Mars would not allow intelligent life to evolve. The conditions are all against it, they say.

But perhaps we are somewhat biased. Thus far we have studied life—and the physical and chemical sciences—mostly on the surface of our own world under a very narrow range of temperature, pressure, gravitation force and atmospheric composition. As an example, let’s take a look at Earth from the viewpoint of a hypothetical Martian: “Life on Earth? Impossible! Too much free oxygen in the atmosphere and you know what a violent chemical element oxygen is! And the Earth is much too wet; nothing could exist down there with all that water! And as for temperature, it’s far too hot!”

When we speak of life—intelligent life in particular—we are thinking of our own world. It has what we call a planetary ecology; there are both plants and animals, and a balance exists between them. It is a very complicated balance. For example, plants and animals have been using and reusing Earth’s air and water and soil chemicals for millions of years, yet they are still there, having been recycled over and over again by this balance of forces.

Here, however, is something which we can apply to Mars. It must also have a closed system if there is life on the planet because such a closed cycle is required by life—or at least we think so. If it has plants, it must also have something similar to animals to balance out the forces.

To go a step further, let’s take a very broad look at life in general. Life here on the Earth is made up of carbon atoms which have the ability under the conditions which exist here to form themselves into very large and complex molecules. Life itself is based on this, because out of these organic carbon molecules come the amino acids and the proteins which are the basis of life. Human beings are merely a very large and complex arrangement of these complex carbon molecules.

Perhaps the basis of all life is a situation and environment capable of producing large and complex molecules. Perhaps large and complex molecules exist on Mars, formed under conditions which we have not yet explored even in our own chemistry labs. (We have barely succeeded in duplicating some of the conditions we think might have produced life here!) And perhaps Mars does have some sort of intelligent life, based on a totally different life chemistry than we know.

Rocket men with their eyes on space travel are interested in this type of planetary astronomy . . . and astronomy in general since the future of the rocket lies in that direction. And they realize that Mars will probably give us a whole new look at what life really is. The Red Planet may even give us some of the answers to the meaning of life itself. There it is: a whole new world with life of some kind on it, there for us to study when we get there.