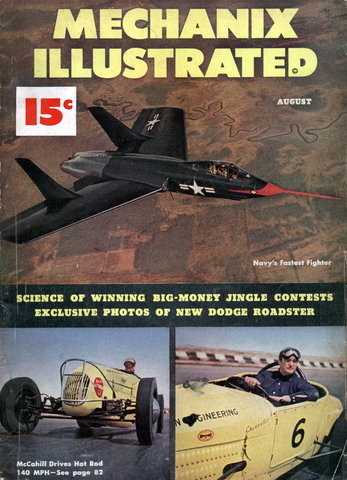 Submarines can win a war, top military men say! So here's the dope on our race for undersea supremacy. By Frank Tinsley THE lowly pig-boat of yesterday has become the capital ship of tomorrow! An American jet submarine, firing underwater rockets, might tilt the balance between victory and defeat in the event of a third world war.
Unique Road Sign

Unique Road Sign is probably a forerunner of many other similar ones to come. Here, it keeps -the road clear as a Navy transport helicopter comes in for a landing at the Piasecki Heliport at. Morton, Pa.
Tiniest Car in Germany

Tiniest Car in Germany is this miniature auto equipped with a one-hp engine. Measuring 2-1/2 yards long, it goes 27 mph and costs less than $300. Germans don’t need a license to drive it. Fend-Flitzer, Rosenheim, Germ.
Hospital for Greenbacks

Millions of mutilated dollars are pieced together by money-menders at the Treasury's Currency Redemption Division. By James Nevin Miller TREASURY Department officials were puzzled recently when a huge, evil-smelling package arrived in the mail. In it was the ash box of a wood-burning cook stove. A letter which followed explained the whole thing, though. It was from an old lady in Baltimore who told how her drunkard son stole the entire family fortune and hid it inside her stove. When she cooked supper that night, the currency was scorched almost beyond recognition. Hysterical with grief, she was sending the charred remnants to Washington. Could they help her? The box was forwarded to the Currency Redemption Division and three weeks later, thanks to a unique little army of Treasury Department workers, every one of the banknotes was identified. The woman received full value for her lifetime savings.
NEW in SCIENCE

Mechanical Sleeve tests a new lightweight fabric called X-Cloth which is made from powdered aluminum with a vinylite plastic base. It reflects back the radiant heat of the body. James H. Rand, Bratenahl, Ohio. Underwater Fireman can fight marine fires like the blazes with this new submergent fire-fighting suit. It's specially equipped with a hose mask for helping the New York Fire Department quench difficult pier blazes. Irradiation Man tests penetration of X-ray. Strips of film are placed inside the dummy (Mr. Cruik-shank by name), and then the four-million-volt generator is turned on him to see if the rays can reach them.
$15,000 Ferrari

$15,000 Auto: good things may come in small packagesâ€”but they also seem to come at high prices. This little Ferrari has a 12-cylinder motor which develops 140 hp. It’s the first of its kind to be imported from Milan, Italy.
Tiny, Axle-less Truck

Axle-less Truck is firstAmerican vehicle with independent suspension of all four wheels. Rubber tension cords like those in plane landing gear are used in place of steel springs. American Motors, Troy, N. Y.
This Man Has X-ray Eyes!

This Man Has X-ray Eyes! By West Peterson I picked up a piece of chalk, walked to the blackboard and scribbled “Mechanix Illustrated.” Kuda Bux, the Indian mystic, accepted the chalk from me and wrote the title of this magazine again. Not only that, he copied my handwriting. “You shouldn’t forget to dot the i,” […]
How to Win a Jingle Contest

By Allen Glasser CAN you write a prize-winning last line for that jingle at the top of the page? You can test your skill as a jingle genius on this limerick. It comes from an actual contest that the A & P Food Stores ran some time ago for their product Nectar Tea. You'll be surprised to find out just how much you don't know about composing the pretty little words that snag big money in advertising contests. Beat your brains with the dictionary, chase up rhymes with the biggest thesaurus you can find, then compare your masterpiece with the line that really copped the big cash prize. You'll find the payoff line printed at the end of this article.
Sportsman With Invisible Hands

THE man with no hands walked up to the attendant in the shooting gallery and asked for a gun. "Do you really think you can shoot?" the attendant asked, noting the stubs where hands should be. "I can try," Joe Padderatz replied. Whereupon he gathered a .22 Winchester into his arms and amazed the onlookers with an expert display of sharpshooting. Before he left, the amazed attendant insisted upon writing a testimonial letter. "Nobody will ever believe it unless it's in writing!" he said.
Putting Fire on a Stick

Putting Fire on a Stick MATCHES first sparked onto the scene back in the 1600’s when a German alchemist set out to brew himself a pot of gold and came up with a pot of phosphorus. It wasn’t long until boxes of matches were developed. The first ones were long sulphur-tipped splints which ignited when […]
Remote-Control STATION WAGON

A 7-1/2 inch scale model of the Jeep Station Wagon. Powered with a miniature electric motor, you can "drive" it yourself. By Douglas Roffe A flick of the switch, the lights go on and this realistic little station wagon starts to roll! A flick of the switch and it'll back up! A twist of the wrist and you can steer it to the left or the right! Powered with a miniature electric motor driven by batteries housed in a flashlight case, this remote control model car is as agile as the real Jeep Station Wagon after which it was patterned. Actually, the control system is very simple. One end of a flexible cable is connected to the steering mechanism on the car while the other end is attached to the flashlight case. By twisting the case the front wheels can be turned. Two wires extending from the batteries in the case are taped to the flexible cable and are connected to the electric motor which drives one rear wheel of the car.
Electric Preacher

Wow, that’s pretty cool. I wonder why don’t they do that in the mega-chruches. Can’t you just imagine Jerry Fallwell shooting lightning from his finger tips? He’d look like a pudgy version of the Emporer from Star Wars… Oh. Mabe that’s why they don’t. Fingertip Sermon is given by George E. Speake at a Christian […]