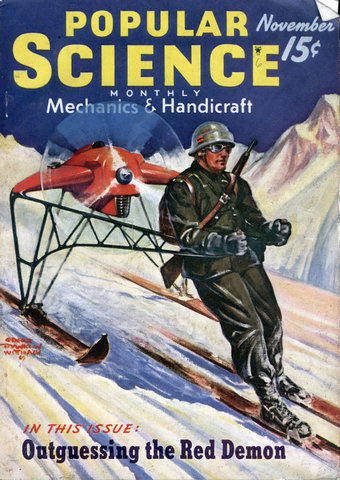 By RAYMOND B. WAILES HOW would you like to transform your home laboratory into a miniature factory for obtaining useful products from minerals, with yourself as its amateur chemical engineer? You can roast ores to obtain important metals, convert plain-looking stones into sparkling white crystals, operate a rotating kiln, and magically separate wanted minerals from unwanted ones by a flotation process.
Air Sweeps Dust off Home Plate

Air Sweeps Dust off Home Plate Baseball umpires can throw away their whisk brooms if an automatic home-plate duster recently invented is generally adopted. When the device is placed in operation, a valve built into the plate rises and a blast of compressed air sweeps it clean of dust and dirt, as shown in the […]
Charts Put Facts at Your Finger Tips

WHY not devise a system whereby facts and helpful advice on specific subjects could be concentrated in the form of revolving or sliding charts that could be carried in the pocket or conveniently hung on the wall of an office, workroom, kitchen, or nursery? That idea occurred not long ago to Harriet B. Meyer, of New York City, whose business is supplying information on a wide variety of subjects, mainly to industries.
Fish Furnish Leather for Making Shoes

Fish Furnish Leather for Making Shoes Fish skins, specially dried and tanned, are now being used in Italy for the manufacture of shoes. Six or seven skins pressed tightly together into one thickness are shaped into shoe uppers that are said to be strong and serviceable. Although the fish-skin material is made especially for shoes, […]
Skyscraper Airport for City of Tomorrow

WHAT the metropolitan skyport of tomorrow may look like, as conceived by Nicholas DeSantis, New York commercial artist, is shown in the illustration below. His remarkable proposal, embodied in a model that he has completed after five years' study of the project, calls for a 200-story building capped by an airplane field eight city blocks long and three blocks wide. A lower level of his "aerotrop-olis," as he has named it, offers a port for lighter-than-air craft. Hangars for planes and airships occupy the top fifty floors.
Bowl "Floating" in Air Defies Gravity

DEFYING the force of gravity, an aluminum bowl that is part of a novel device known as an "electromagnetic levitator" fascinates crowds at the New York World's Fair by floating in air with no visible means of support. Developed by General Electric research engineers as a demonstration of electric and magnetic forces, the bowl is invisibly supported by the force arising from the interaction of electric currents induced in it and a magnetic field created by coils and an iron core in a housing underneath.
Planting the Stars and Stripes in the Antarctic

By ALDEN P. ARMAGNAC CRUNCHING snow and ice beneath ten-foot pneumatic tires, throbbing with the combined 400 horsepower of its mighty Diesel engines, a fifty-five-foot juggernaut with a swift airplane poised on its broad back soon will roll into polar lands of mystery. As fantastic a land craft as the strangest creations of fiction, this "snow cruiser" heads an array of scientific innovations that will serve the forthcoming U. S. Government expedition to Antarctica and the South Pole.
It's a Thrifty Thing... the Telephone

BILLBOARD blimps, carrying" flashing neon signs through the night sky above big cities, form the latest innovation in spectacular advertising. The aerial electric signs, developed and patented by Goodyear Rubber Co. experts, spell out sentences a word at a time like many of the big displays on New York's Great White Way. Ten lighting units, each approximately six feet high and four feet wide and formed of a maze of curving and zigzag neon tubes, are attached to the side of the semirigid dirigible before the take-off. An ingenious hooking arrangement permits them to be attached or removed in a few minutes. Each unit is capable of producing any number or any letter of the alphabet. During the flight, an automatic mechar nism makes the proper contacts to spell out the desired words on the side of the blimp. Perforated tape, similar to that used in player pianos, runs through the switching mechanism, the perforations tripping mechanical fingers to make the electrical connections. The sign remains the same until the next series of perforations is encountered, flashing on another series of letters.
Halloween Habiliments

COSTUME SUGGESTIONS BY HI SIBLEY UNIQUE Hallowe'en costumes of the type illustrated can be made at small outlay for material. The three-legged twins, for instance, require a special coat and shoes, but old pajamas will provide the trouser legs. The perambulating dog house is constructed from a large cardboard carton and painted green with a red roof. Brown "coveralls" and a dog mask should be worn by the person inside.
Polish Plane Packs Guns in Its Pants

Polish Plane Packs Guns in Its Pants War planes now even carry guns in their “pants.” The illustration at right, of a new Polish fighting craft, shows how a machine gun is attached to the streamline fairing of the undercarriage. Like other guns installed in the plane, it is fired by remote control from the […]
Handbag Holds No Secrets

Handbag Holds No Secrets A transparent handbag” for women is now becoming a fashionable accessory abroad. Made of a clear, semistiff, transparent plastic material, with decorative stitching at the edges, the bag reveals its contents at all times. The owner can even powder her nose while looking in a mirror that is inside her handbag, […]
Filter Pipe Is Smoked Through a Cigarette

This is brilliant marketing by the tobacco industry. Convince people that it is healthier to smoke their pipe tobacco through cigarette tobacco. There really should be some way to fit a cigar in here too. Filter Pipe Is Smoked Through a Cigarette More than eighty percent of the nicotine in tobacco smoke is said to […]
WHY SCRATCH?

Dry-Land “Aquaplaning” Is Thrilling New Sport “Aquaplaning” on dry land, towed by a speeding car, makes a risky but thrilling” sport introduced by junior college students at St. Petersburg, Fla. By shifting his weight, a skillful rider can swing the board in wide arcs from side to side. He must lean far backward to keep […]
Turtle Trapper Snares Underwater Killers

This man is a hero for stopping the evil menace of turtles… Turtle Trapper Snares Underwater Killers MAINTAINING the position he has earned as public enemy No. 1 to the snapping turtles of Long Island is the task that keeps Arthur L. Lucas, of Center Moriches, N.Y., busy. For five years, Lucas has waged war […]
Skater Performs on Tiny Ice Rink in Store Window

In the picture she’s attempting the triple camel toe maneuver, one of window skating’s most difficult. Skater Performs on Tiny Ice Rink in Store Window What is said to be the world’s smallest ice-skating rink was recently constructed in a display window of a New York City furniture store as a novel means of letting […]
Catapult Hurls Man into Lake

Catapult Hurls Man into Lake Flying through the air with the greatest of ease is no trick at all to Walter Bura, of West Orange, N. J., who designed the man-throwing catapult shown installed on the boardwalk of Lake Mohawk, Sparta, N. J. Modeled after ancient Roman military types, Bura’s catapult has an open steel […]
Hobbyist Fashions Cigar-Butt Army

Hobbyist Fashions Cigar-Butt Army Making comic toy soldiers from cigarettes, cigar butts, and other smokers’ materials is the odd spare-time occupation of the hobbyist pictured at work in the photograph below. Products of his unusual craft include buck privates made from painted cigarettes, with paper-match arms and burnt-match facial features, a cannon made from a […]
Harmonica and Kazoo Combined

IN ONE INSTRUMENT BY COMBINING a harmonica and a kazoo as shown, it is possible to change instantly from one to the other and get a wide range of tones above and below the regular harmonica scale, as well as a variety of trumpet and blue notes.
Barrel Exerciser Rolls Away Fat

Barrel Exerciser Rolls Away Fat Excess fat on any part of the body can be removed easily with a novel electric massaging barrel, according to the manufacturer. Supported by a metal frame, the barrel, fitted with closely-spaced wooden rollers free to turn, is rotated by a small electric motor that operates on 110 volts A.C. […]
SURE ROUTE TO HAPPY-LAND

SURE ROUTE TO HAPPY-LAND MAIL TODAY SURE J.C. DEAGAN, Inc., Dept. 3658 1770 Berteau, Chicago Without cost of obligation, tell me about the easy-to-play DEAGAN MARIMBA… its sensational rise in the music world… the opportunities for radio, stage and dance-band fame. EASY TO PLAY
Cattle Get Headlights-Horns Standard Equipment

Cattle Get Headlights-Horns Standard Equipment After several of his livestock had wandered onto dark country roads at night, and been killed by passing automobiles and trucks, an English farmer solved the problem by providing head and tail lights for his cattle. Tiny lamps powered by small dry cells are affixed to the horns and tails […]
Walking the Dog Drives Poochmobile

The caption is funny too: “Z. Wiggs out for a spin in his pooch-mobile. “ The guy’s name is Z. Wiggs, but when I read it I thought the dog’s name was Z and he was wigging out for a ride. I like my interpretation better. Walking the Dog Drives Poochmobile DOG power drives an […]