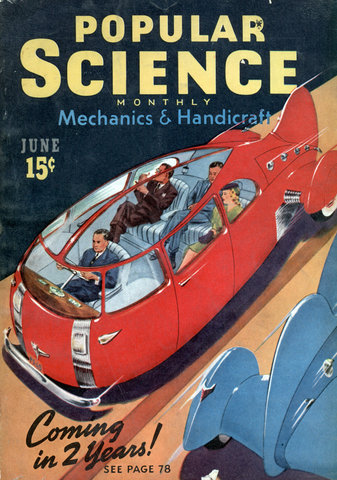 Hobbyist Wears Thirty Watches Champion watch-watcher of the world is Charles Brown, an English hobbyist who starts out in the morning with as many as thirty timepieces ticking on his person. In addition to conventional pocket and wrist watches, he wears tiny timepieces in the form of cuff links, rings, and Lapel buttons. For years, […]
LOUISVILLE SLUGGER - Pals

"A ballplayer and his Louisville Slugger are like a man and his dog —INSEPARABLE PALS"— says Joe DiMaggio, Famous Yankee home run slugger and A.L. Champion last season.
Face Masks for Arctic War

Face Masks for Arctic War Although he looks as though he might have been made up to play the role of a monster in a horror movie, the man pictured at the left is actually a Swedish soldier wearing a weird fleece mask that serves the purpose of protecting his face from the bitter winds […]
Stereoscopic Film Viewer Shows Scenes in Color

Stereoscopic Film Viewer Shows Scenes in Color Three-dimensional views in color are provided by the novel stereoscopic instrument pictured in use at the right. Color films are mounted in disks that are placed within the apparatus, which is provided with a small lever at the top for moving successive frames into place before the dual […]
Uncle Sam Counts Noses

HOW AMAZING MACHINES HELP TAKE THE CENSUS LAST month the census taker came to call. He unfolded a big white sheet of paper and began firing questions. Name? Age? Birthplace? And so on until he knew all the answers, and departed with his pencil-checked list. All over the country, 120,000 fact finders were doing the same. So far as foresight in planning could provide, they overlooked no dwelling's occupants; they even visited auto trailers, marking them with stickers to avoid recounting!
Atom Smasher Made from Spare Parts

Atom Smasher Made from Spare Parts Spare parts collected from the physics laboratory and skillfully assembled make up the midget atom smasher illustrated above that helps teach Columbia University students the effects of static electricity. Built from commonplace materials, which include a rapidly moving belt of adding-machine paper onto which is sprayed a direct current […]
Use of Electric Shaver Sold by Slot Machine

Yuck. Use of Electric Shaver Sold by Slot Machine FOR men who want a quick shave away from home, a novel coin-operated machine recently introduced provides an electric shaver and a well-lighted mirror. When a coin is dropped into a slot in the machine, the current for the shaver is turned on. When not in […]
The Making of a "Funny"

By EDWARD W. MURTFELDT RESEARCH workers studying the reading habits of newspaper buyers have found out that more people look at the "funny" pages than at any other single section of a newspaper. Yet few cartoon enthusiasts realize how elaborate is the process that brings a comic from the brain and drawing board of a cartoonist through the involved stages of coloring, engraving, mat making, stereotyping, and printing to its final form as part of a published paper.
Camera Built from Thread Spool

New Use for Old Spool – as a Miniature Camera A MINIATURE camera built into a thread spool is a recent accomplishment of John Becker, of Chicago, Ill., who has been saving spools for a period of forty years and finding a number of odd uses for them. Becker is shown snapping a picture with […]
New Patents Forecast Your 1942 Car

THAT car you'll be buying in 1942â€”what will it look like? Will it have the engine in the front or in the back ? Will it be heavier or lighter, longer or shorter, more or less expensive than the car you're driving now ? Startling is the only word for the answers to these fascinating questions, as disclosed by an automotive survey just completed by Popular Science Monthly. Whispers of radical changes and innovations in motor-car design are in the wind, and the recent granting of a series of important automotive patents, every one of which covers a car having its power plant in the back instead of the front, heralds the dawn of a new era in automotive transportation.
Clock Tells Time from Any Angle

Clock Tells Time from Any Angle Fitted with specially designed numerals, a novel clock makes it easy to tell time no matter at what angle the timepiece is viewed. Hour numbers are lettered on both sides of projections from the clock face, which are shaped like wedges of cake. Thus the numerals can be seen […]
New Boom in Gliders

Thrilling Aerial Sport Gains Wider Popularity Through Knockdown Kits That Enable Anybody To Build His Own Sailplane, Buying All the Materials on a Pay-as-You-Go Plan By ANDREW R. BOONE SOARING on wings assembled in back yards and home workshops, hundreds of glider enthusiasts are piloting their own sailplanes. Bought on the installment plan, their ships come in knockdown kits. Piecemeal buying enables boys and men alike to build gliders. As a result, flying without power is sweeping the nation. More than forty meets will be staged this year, from the big national events like the one held annually at Elmira, N. Y., to small sectional competitions on farm lots, desert lakes, and mountain pastures. Two hundred clubs have been formed with 2,000 members. Aside from the kits, would-be soarers need purchase few accessories. Tow rope, a couple of wrenches, air-speed meter, and a sensitive variometer fill the bill. In many towns groups club together, building their own soaring planes and cooperating in flying. At a cost far less than that of a powered plane, their members enjoy the thrills and pleasures of flying. Danger of injury is less, too, for they can land the light craft at comparatively slow speeds.
Human Sunshine Tester Compares Two Brands

Quick! Someone call Batman! Human Sunshine Tester Compares Two Brands Which has the better quality of sunshine, Florida or California? To settle this longstanding dispute, the gentleman at the left is exposing half of his epidermis to Florida’s sun, reserving the clothed half for a comparison test in California.
Fireworks Ads

Thought these might be nice for the fourth.
Odd Shout-O-Phone Spans Border

Odd Shout-O-Phone Spans Border FRIENDS and relatives on opposite sides of the French-Swiss border must exchange greetings across a forbidden zone seventy feet wide, but that doesn’t matter to the well-equipped conversationalist shown at the left. He talks through a megaphone, and listens with ear trumpets like airplane detectors, while his binoculars complete the illusion […]