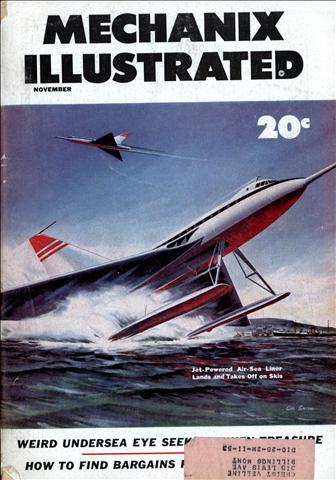 While on duty with the Armed Forces, these Gl's picked up ideas that meant money and careers for them in later years. By Lester David DID you ever think of the Army as a source for million-dollar ideas? And not for the mammoth corporations, either, but for the average working Joe in uniform? Well, it's incredibly, and very happily, a fact. It was a cold, dismal mid-morning at Wright Field in Ohio. Lieutenant Lloyd Rudd straightened up from his laboratory workbench in the engineering division, stretched and called: "Hey, Sarge, how's about a cup of hot Java?"
NEW in SCIENCE

SARAH rescue device sends radio signals that pinpoint the position of crash victims for the rescue craft. Then survivor switches to the "mike" and gives directions. Made in England. BATHYSPHERE, top. of August Piccard will be used to explore Tyrrhenian Sea 4,000 ft. down. Top cylinders are fuel tanks. Sphere lowers from bottom. Above, test dive in Castellamare, Italy.
James Liddy's Bedsprings

By Alfred Lief ONE day in 1853 James E. Liddy, a carriage maker's blacksmith, drove his wife into Watertown, N. Y., in their buggy. They were newlyweds. Young Liddy was rather irked, waiting in the seat so long. He fidgeted and bounced on the coil-spring cushion seat—then suddenly his expression changed.
AIR-SEA JETLINER

AIR-SEA JETLINER AFTER months of top-secret tests, the Navy has partially lifted the wraps on its XF2Y-1 Sea-Dart, world’s first delta-wing seaplane, which uses retractable hydro-skis for take-off and landing. MI’s cover and the Convair drawing above show what this sensational development may mean to commercial air travel of the future. Imagine a supersonic jetliner, […]
HISTORY WITH A BANG!

HISTORY WITH A BANG! ROBERT Lewis of Tujunga, Calif., gets a big bang from his hobby—a private gun collection said to be one of the finest in the country. He began gunning for guns 25 years ago and has amassed 135 historically significant weapons ranging from the 15th Century to the present day and including […]
McCahill Drives The Austin Healey

Uncle Tom test-drives the most talked-about sports car of the year and finds very few faults to criticize, many virtues to praise. NOT since the day Neville Chamberlin showed up at 10 Downing Street with his umbrella incorrectly rolled, has a more sensational shocker taken place than that caused by the birth of the new Austin Healey 100. The windscreen and bonnet boys of England's motordom were outrageously amazed at the reception accorded this upstart at Mr. Herbert Shriner's Second Annual International Motor Sports Show in New York. At this prime American exhibit, the sales people of some of Britain's oldest and most traditional concerns never put a mark on an order blank whilst Mr. Donald Healey's creation was causing a near-riot. In two words, Donald Healey and associates "had It" whilst their fellow Britons "Had it."
HOLLYWOOD'S FROGMAN

Glen Galvin of MGM, attired in bathing suit and oxygen mask, is man behind the scenes in Hollywood's fabulous underwater extravaganzas. By Bob Willett STANDING on the bottom at a depth of 12 feet, a man pulled steadily on a slender line. About 100 feet away, an object moved slowly toward him through the greenish-blue water. As it drew near it took the shape of a beautiful young woman whose face and form could rival those of any mythical sea siren. She was bound hand and foot but, despite this apparent predicament, managed a cheerful grin when the diver finally reached out and grabbed her. Following twin streams of bubbles, they rose to the surface and he towed her to safety.
TV HOUSE OF MAGIC

The TV camera often lies. Magicians work props and special gadgets to fool their audience. By H. W. Kellick MISTER Peepers, a role played by bespectacled Wally Cox, was nonchalantly pecking away at his typewriter in his science schoolroom on NBC when suddenly there was an explosive noise and parts of the machine went flying all over the room. The "accident" drew hearty laughs from viewers and people wondered if this was one of Wally's own tricks which he cooked up in his spare time. ' As a matter of fact, this gag was a gimmick concocted by a special-effects man who redesigned a standard typewriter and inserted a spring in the carriage which sent machine parts flying in the air on cue.
Inside Uncle Tom

Which car does Tom McCahill really like best? What kind of a guy is he personally? What testing methods does he use?
He Popped Corn Into a Fortune

From buying furs to selling popcorn was quite a jump for Clyde Gould. But he made it— and sales are really popping. By Bruce Morgan CLYDE "Blackie" Gould, a 30-year-old Minneapolis man, had always been nuts about popcorn. Like millions of others, he ate the stuff in theaters, at fairs and sports events and he saw so much corn popping wherever he went that he felt it might be an easy way to make money. As a result he came up with a brand new idea for selling popcorn and in the first year his cash register played such a pleasing tune to the accompaniment of popping corn that his idea is destined to turn into a nationwide bonanza.
MI Tests The Studillac

RAYMOND Loewy, Studebaker designer and chief stylist, proved once again in 1953 that he's the guy the rest of the country's designers wish they were. Back 1n 1946 he inspired the industry to steal his notchback Studie designs and in 1953 he came out with a car that made the typical monsters of Detroit look as modern as Ben Hur's chariot in a stock car race. The engine of these showroom Studebakers is the same V-8 they had in 1952, a competent power plant which has proven responsive to hopping-up treatment. And now, the sporty lines of the 1953 models have inspired Bill Frick to create the "Studillac," a real hydrogen bomb in spades and about which I propose to tell you more forthwith.