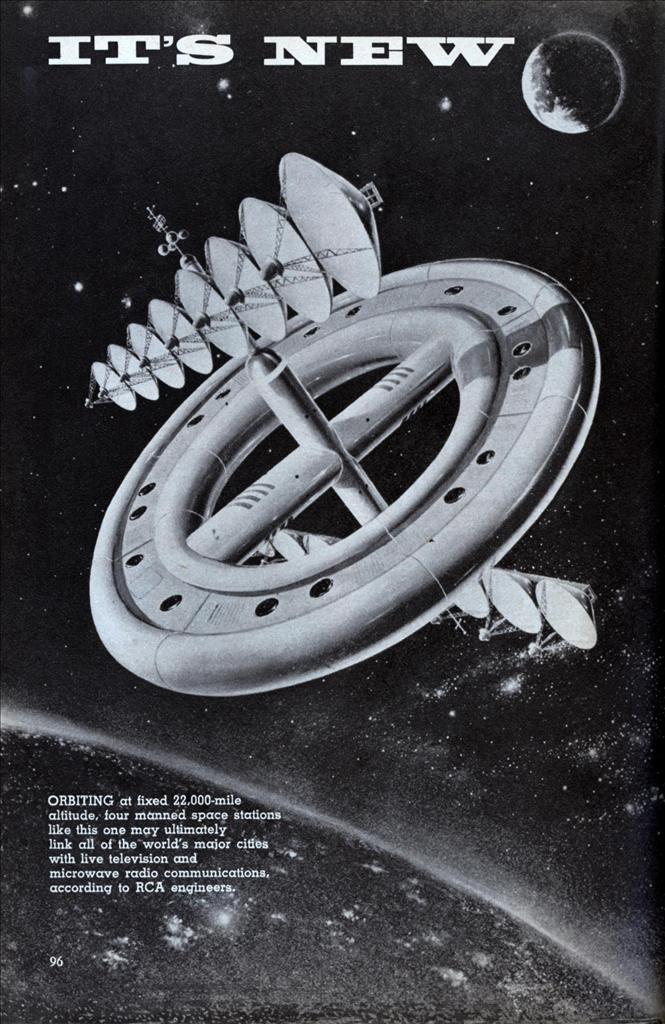 ORBITING at fixed 22,000-mile altitude, four manned space stations like this one may ultimately link all of the world’s major cities with live television and microwave radio communications, according to RCA engineers.

ROLLOUT TV has wooden top from which tea-lovers can be served. Lightweight car rides on rubber wheels.

RESUSCITATOR, three inches long with thimble for mask, is world’s smallest It can even revive parakeet but is designed for newborn babes.

“HUCKLEBERRY” river boat was built in a year by Robert Peterson and sons, Charles and Clifford of Chicago. They cruised Illinois River.

MITY-LITE flashlight (arrow) floats and can be used underwater. Plastic case is corrosion, damage resistant. Light can be hand-carried, worn at neck, etc., by cord.

INFLATABLE MARKER for helicopter landing sites is being tested by U.S. Marines. It can also be used as emergency marker for mountaineers, rangers or sailors at sea.

JABBO the robot can walk, lift his arms, turn his head, give a canned speech and make his eyes light up. He won first prize for his master, Robin Chandler of Salisbury’ N. C, at the South Piedmont Science Fair. Jabbo was created from spare parts in 160 hours.

ADJUST-A-BED plugs into clock-radio and awakens sleeper by raising him to sitting position when timer turns on radio. Simmons bed adjusts to variety of positions.