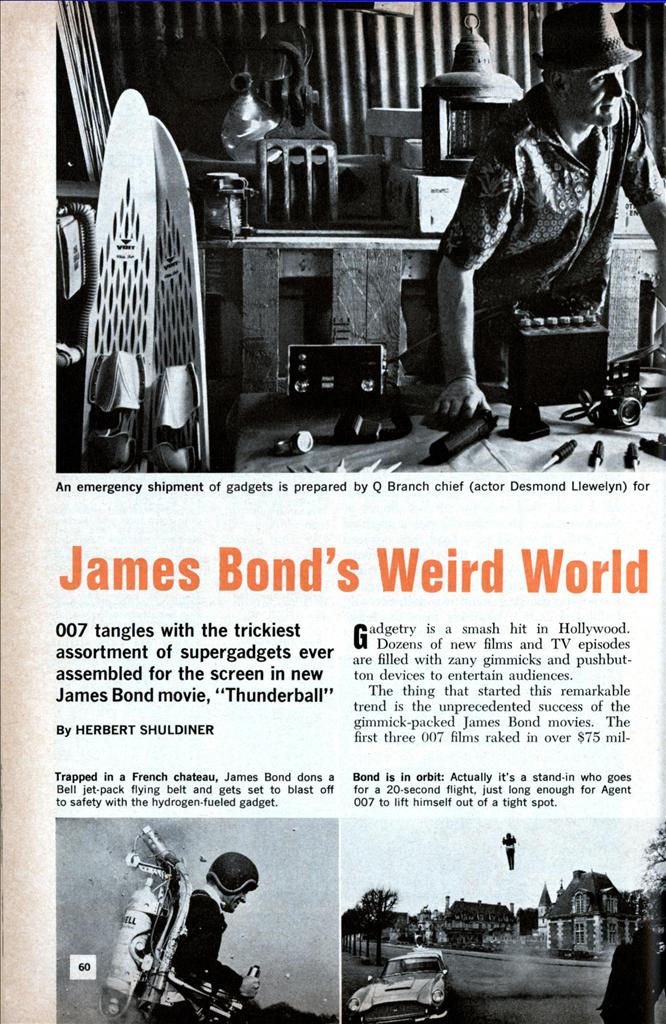 007 tangles with the trickiest assortment of supergadgets ever assembled for the screen in new James Bond movie, “Thunderball”

Gadgetry is a smash hit in Hollywood. Dozens of new films and TV episodes are filled with zany gimmicks and pushbutton devices to entertain audiences.

The thing that started this remarkable trend is the unprecedented success of the gimmick-packed James Bond movies. The first three 007 films raked in over $75 million. Gold finger alone has earned about $43 million—more than any film has ever returned over a comparable time span.

Because their success has spawned so many imitators, the Bond producers now have to reach for some pretty spectacular devices to keep Bondophiles on the edge of their seats. So they’ve invested about $500,- 000 for the zany gadgets in the newest 007 thriller, Thunderball, starring Sean Connery.

Most of the infernal devices never existed in the original Ian Fleming stories. “Our only excuse for using them” says screenwriter Richard Maibaum, “is that such devices are available and cry out to be buckled onto James Bond’s back.”

Some of the gadgets actually are buckled onto Connery’s famous back. One is the Bell jet-pack flying belt Bond uses in the beginning of the film to escape from a French chateau. Connery has to wear a special Dacron suit whose color won’t bleach out when touched by the belt’s highly concentrated peroxide fuel. The belt provides about 20 seconds of flight, but only 10 seconds is used for the upward flight. It would be disastrous to run out of power a couple of hundred feet up in the air.

Thunderbolts prize piece of gatgetry is a $300,000. 64-foot hydrofoil yacht. It belongs to 007’s enemies—SPECTRE—a sinister gang of international criminals that has hijacked two H-bombs from NATO. They’re holding the bombs for $300 million in ransom. If the Allies don’t pay off, SPECTRE threatens to wipe out two Western cities.

SPECTRE (Special Executive for Counterintelligence, Terrorism, Revenge, and Extortion) is led by Emilio Largo from the hydrofoil floating fortress called the Disco Volante.

The come-apart boat. Thunderbolts production designer, Ken Adams, couldn’t find a hydrofoil imposing enough for the wide-screen Panavision film, so he decided to build a cocoon aft on a 60-footer, nearly doubling the vessel’s length to an overall 110 feet. This permits the film makers to add an exciting fillip. The cocoon can be jettisoned at the touch of a button, allowing the hydrofoil to zoom off at full speed.

The hydrofoil has a 1,320-hp. Mercedes-Benz diesel and can hit a top speed of about 40 knots. But Adams can improve on that—by filming it at one-third normal camera speed. Normal projection speed makes the Disco Volante appear to do over 100 knots. The hydrofoil is also the mother ship for a two-man sub and eight sea tows—one-man, powered underwater sleds.

Jordan Klein, a top expert in the art of undersea movie making, designed the sub. It’s supposed to transport the hijacked H-bombs to targets selected by SPECTRE if NATO doesn’t cough up the ransom.

The 18-foot sub weighs 3,880 pounds and has negative buoyancy. It is powered by three 3/2-hp. electric motors, each reversible so the sub can turn in its own length.

The motors are located forward, one on each side. A third motor is behind the cockpit in the stern. They are operated through control-panel switches and any one can be used separately. The battery-powered minisub motors run at 750 r.p.m. The sub has a top speed of 4-1/2 knots submerged and runs up to four hours continuously before its batteries have to be recharged. Six guns mounted in front of the sub fire four-foot-long spears on compressed air. The sub operates down to depths of 200 feet.

Klein also designed the sea tows. These are just under 10 feet long and are powered by battery-run, 3/2-hp. electric motors. They support the upper portion of a skin diver who steers the contraption with flippers.

When Bond discovers this formidable array of hardware, he calls for the head of his Q Branch to rush a shipment of counter-weapons. Most of these are off-the-shelf gadgets like the Heath marine radios and Voit skin-diving gear.

But where the real thing doesn’t exist, props have to be created. The man who put together the nonmarine gadgetry in Thunderbolt is John Stears, the special-effects genius of all the Bond movies.

Grenades are old-fashioned. Stears came up with all the unique devices for 007*8 Aston Martin in Goldfinger, and has even added a few to the car, which is also used in the new movie. Stears says the gadgetry the late Ian Fleming used is old-fashioned. Thus, where Fleming used a hand grenade tossed into an open Volkswagen to kill SPECTRE agent Count Lippe, Stears adapted a rocket-firing, 120-m.p.h. motorcycle to do the job in more spectacular fashion.

Stears added four rockets, which cost about $10 each to make. He used a regular artillery unit, ignited by a .38-caliber cartridge. The rockets actually detonate on contact. Two of the rockets contain napalm, and two ordinary black powder.

Bond doesn’t get any underwater vehicles to battle SPECTRE, but Q delivers some other fascinating items: • A wristwatch Geiger counter to help Bond search for the missing H-bombs.

• A pill-like transmitter that Bond swallows when he is trapped by SPECTRE in a sealed-off crater. The beam attracts a con- federate in a helicopter and guides him in.

• A skyhook device, which is dropped by the confederate to Bond. It’s a helium -filled balloon that pulls up a cable and holds it aloft for the co-agent to catch in the chopper’s winch and thus hoist 007 to safety.

• A rebreather. This cigar-shaped device provides Bond with two minutes of emergency oxygen—enough to get him out of another tight spot.

Only one of these devices—the skyhook-exists, but what Bond needs, Bond gets.

Agent 007 also gets a unique self-propelled underwater backpack on which two deadly impact-exploding spears are mounted. The pack consists of an aqualung with two tanks, plus a jet-propulsion unit. One tank provides air for breathing and firing the compressed-air spear guns. The second tank releases a pressurized liquid dye to make a screen for Bond. The spears have 12-gauge shotgun-shell heads that explode on contact.

Taking the action underwater. About 25 percent of Thunderbolt takes place underwater. It took about 845,000 worth of skin-diving gear to outfit the 45 skin divers for undersea fight scenes. Although much of the action is submerged, it’s easy to tell who’s who. The baddies wear black. Bond and his helpers wear bright orange outfits.

A flotilla of 29 ships, ranging in size from small outboards to a British Navy cruiser, are used in Thunderbolt. The cruiser just happened to be in the Bahamas where the film was shot, so director Terrence Young decided to work it into a chase scene.

At the climax of the film, SPECTRE ferries the H-bombs to the waters off Miami, where they are to be planted and set to detonate when the ransom deadline arrives.

Bond leads his troops to intercept Largo’s gang. Ian Fleming had the good guys pop out of a nuclear sub. The movie producers use a more spectacular team of interceptors. They arranged to film the jumping exercise of 15 U.S. Air Force aquaparamedics—the same ones who assist in astronaut landings— from a height of 1.200 feet. When they hit the water, the scene cuts to the extras engaged in a tremendous underwater battle with the SPECTRE gang.

We won’t tell you the outcome. But you can be sure that 007’s zany world of gadgets, girls, and vodka martinis—shaken, not stirred—will survive.