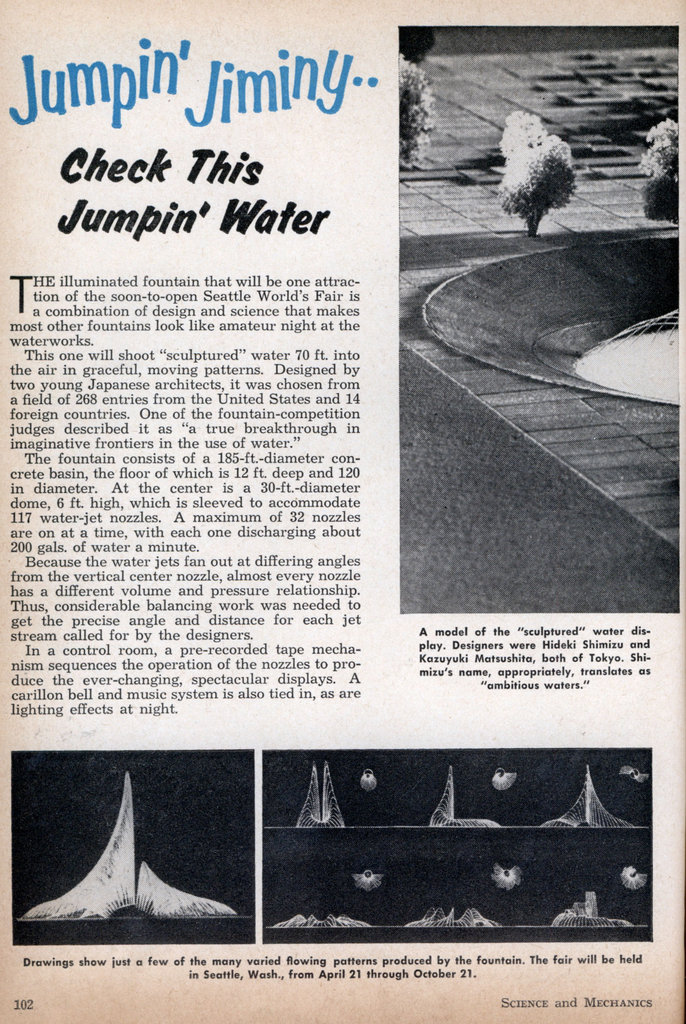 THE illuminated fountain that will be one attraction of the soon-to-open Seattle World’s Fair is a combination of design and science that makes most other fountains look like amateur night at the waterworks.

This one will shoot “sculptured” water 70 ft. into the air in graceful, moving patterns. Designed by two young Japanese architects, it was chosen from a field of 268 entries from the United States and 14 foreign countries. One of the fountain-competition judges described it as “a true breakthrough in imaginative frontiers in the use of water.”

The fountain consists of a 185-ft.-diameter concrete basin, the floor of which is 12 ft. deep and 120 in diameter. At the center is a 30-ft.-diameter dome, 6 ft. high, which is sleeved to accommodate 117 water-jet nozzles. A maximum of 32 nozzles are on at a time, with each one discharging about 200 gals, of water a minute.

Because the water jets fan out at differing angles from the vertical center nozzle, almost every nozzle has a different volume and pressure relationship. Thus, considerable balancing work was needed to get the precise angle and distance for each jet stream called for by the designers.

In a control room, a pre-recorded tape mechanism sequences the operation of the nozzles to produce the ever-changing, spectacular displays. A carillon bell and music system is also tied in, as are lighting effects at night.