Modern Mechanix
Issue: Aug, 1930
Posted in: Nautical
No Comments on Kayak Near Disaster in Bout with Whale (Aug, 1930)

Kayak Near Disaster in Bout with Whale (Aug, 1930) 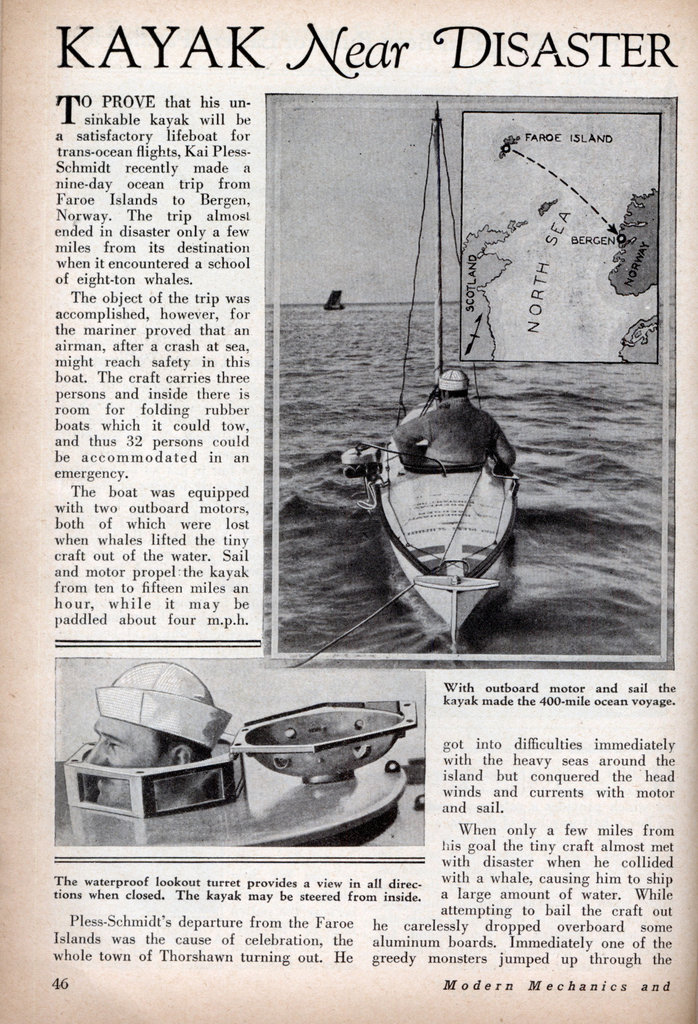 Kayak Near Disaster in Bout with Whale

TO PROVE that his unsinkable kayak will be a satisfactory lifeboat for trans-ocean flights, Kai Pless-Schmidt recently made a nine-day ocean trip from Faroe Islands to Bergen, Norway. The trip almost ended in disaster only a few miles from its destination when it encountered a school of eight-ton whales.

The object of the trip was accomplished, however, for the mariner proved that an airman, after a crash at sea, might reach safety in this boat. The craft carries three persons and inside there is room for folding rubber boats which it could tow, and thus 32 persons could be accommodated in an emergency.

The boat was equipped with two outboard motors, both of which were lost when whales lifted the tiny craft out of the water. Sail and motor propel the kayak from ten to fifteen miles an hour, while it may be paddled about four m.p.h.

Pless-Schmidt’s departure from the Faroe Islands was the cause of celebration, the whole town of Thorshawn turning out. He got into difficulties immediately with the heavy seas around the island but conquered the head winds and currents with motor and sail.

When only a few miles from his goal the tiny craft almost met with disaster when he collided with a whale, causing him to ship a large amount of water. While attempting to bail the craft out he carelessly dropped overboard some aluminum boards. Immediately one of the greedy monsters jumped up through the water and swallowed the boards, grazing the side of the kayak.

To avoid being hit by the heavy body, Pless-Schmidt instinctively threw himself forward, smashing the glass skylight with his head. The whale, apparently cut by the plates in its throat, continued to jump out of the water, taking the outboard motor with it on one of its plunges. Stunned by the blow, Pless-Schmidt drifted helplessly for two days before being picked up by a passing ship.