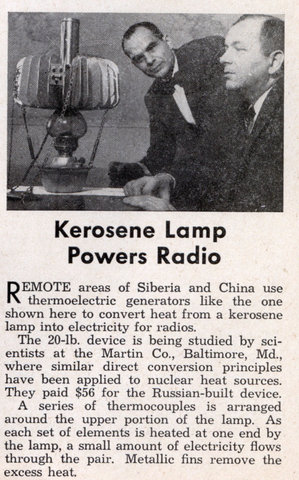 REMOTE areas of Siberia and China use thermoelectric generators like the one shown here to convert heat from a kerosene lamp into electricity for radios.

The 20-lb. device is being studied by scientists at the Martin Co., Baltimore, Md., where similar direct conversion principles have been applied to nuclear heat sources. They paid $56 for the Russian-built device.

A series of thermocouples is arranged around the upper portion of the lamp. As each set of elements is heated at one end by the lamp, a small amount of electricity flows through the pair. Metallic fins remove the excess heat.