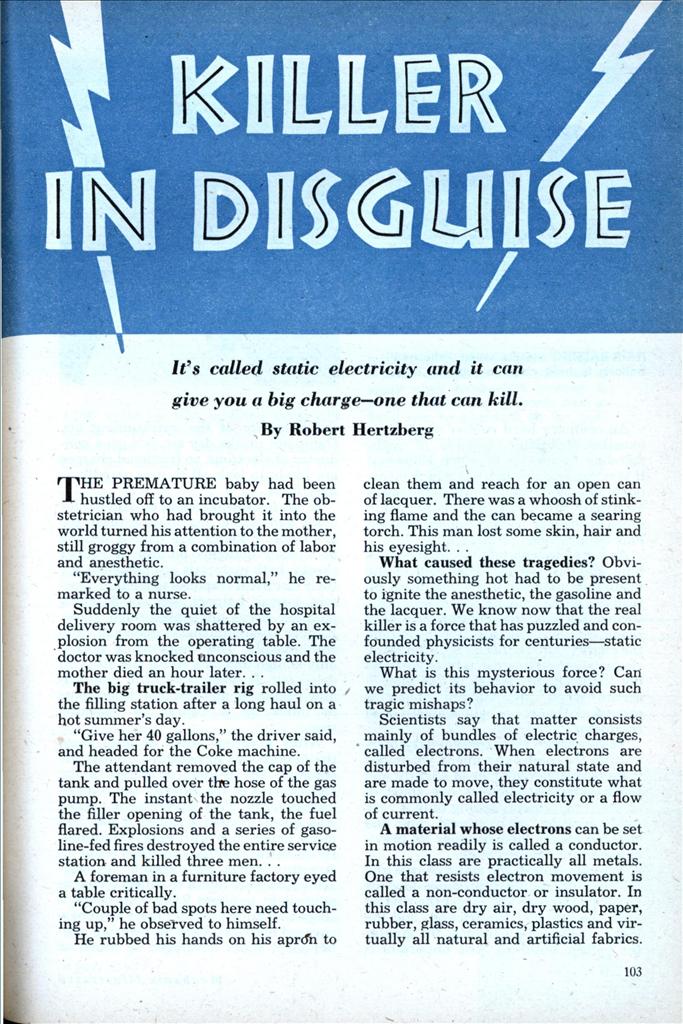 It’s called static electricity and it can give you a big charge—one that can kill.

THE PREMATURE baby had been hustled off to an incubator. The obstetrician who had brought it into the world turned his attention to the mother, still groggy from a combination of labor and anesthetic.

“Everything looks normal,” he remarked to a nurse.

Suddenly the quiet of the hospital delivery room was shattered by an explosion from the operating table. The doctor was knocked unconscious and the mother died an hour later.

The big truck-trailer rig rolled into . the filling station after a long haul on a hot summer’s day.

“Give her 40 gallon” the driver said, and headed for the Coke machine.

The attendant removed the cap of the tank and pulled over the hose of the gas pump. The instant the nozzle touched the filler opening of the tank, the fuel flared. Explosions and a series of gasoline-fed fires destroyed the entire service station and killed three men. . .

A foreman in a furniture factory eyed a table critically.

“Couple of bad spots here need touching up,” he observed to himself.

He rubbed his hands on his apron to clean them and reach for an open can of lacquer. There was a whoosh of stinking flame and the can became a searing torch. This man lost some skin, hair and his eyesight. . .

What caused these tragedies? Obviously something hot had to be present to ignite the anesthetic, the gasoline and the lacquer. We know now that the real killer is a force that has puzzled and confounded physicists for centuries—static electricity.

What is this mysterious force? Can we predict its behavior to avoid such tragic mishaps?

Scientists say that matter consists mainly of bundles of electric charges, called electrons. When electrons are disturbed from their natural state and are made to move, they constitute what is commonly called electricity or a flow of current.

An ordinary hard rubber comb is an excellent insulator, capable of withstanding thousands of volts. However, if you run one through your hair vigorously, it generates so much frictional electricity that you can actually hear it crackle. Instead of lying flat the combed hair often springs up straight.

As far as we can tell, the surface rubbing agitates the electrons within the insulating material and winds them up ready to move, much in the manner of a spring. Because the electrons are only ready to move, but still not in motion, the energy they represent is called static electricity to distinguish it from the flowing kind. Quick release of the energy occurs when the charged object is grounded; that is, brought against a good conductor.

To discharge your fuzzy-wuzzy hairdo after the comb experiment, you might have to dampen your head slightly and touch a faucet. There is one spurt of electron movement, lasting only a very small fraction of a second, and the charged object then resumes its previous inert, uncharged state.

The intensity of the static charge and the possible trouble it can cause depends on several factors. The larger the rubbed area, the stronger the friction; and the higher the speed of rubbing, the greater the voltage build-up. Also important is the humidity of the surrounding air. Damp air, unlike dry air, is a good conductor of electrons, so frictional charges are likely to leak off to it* as rapidly as they form.

In an operating room, conditions for static generation are often entirely too favorable. Patients are moved around in woolen blankets on top of rubber sheets; both materials are notorious for their electrical response to friction. Doctors, nurses, helpers, etc., shuffle along polished floors on rubber-soled shoes. Rubber anesthetic masks open and close rhythmically. The temperature invariably is high and as a result the air is all dried out. It takes very little unavoidable friction in any one of a dozen spots to build up a charge of sparking size.

After a recent wave of fatal anesthetic blow-ups in hospitals around the country, The Bureau of Mines of the Department of the Interior did a lot of investigating. This government agency was given the job because it has had much experience with mine explosions. Its technical sleuths unearthed some interesting figures. For example: an operating table was found to collect a charge equivalent to about 9,000 volts when a sheet was pulled rapidly from a rubber-covered mattress. Persons wearing rubber-soled shoes developed as much as 1,500 volts by just walking naturally across a dry linoleum floor.

Because static charges accumulate only on insulated, dry objects, the obvious preventative measure is to change this status and use materials with a minimum susceptibility to friction. In the hospital, a simple but effective stunt is to ground all furniture in the operating room together and to the personnel by means of wet towels spread along the floor.

The gas station fire can be traced directly to a heavy static charge built up on rubber tires by their rapid friction against a dry road. This charge caused a spark to jump to the hose nozzle, igniting fuel vapors from the truck’s tank. Again the protection is an integral discharger. The most common device is a chain attached to the rear of the vehicle and dragging on the ground.

The cause of the lacquer fire is quite clear now. By rubbing his hands on his apron, the workman charged himself .thoroughly. When he reached for the metal can, Tzing! went the spark and up went the lacquer.

Many amusing parlor tricks can be performed with static electricity (see these pages) but never forget that this force is a killer in disguise. Treat it as such and you may save yourself possible serious injury—or even death. •