Popular Science
Issue: May, 1959
Posted in: Aviation
8 Comments on Learning to live with The Sonic Boom (May, 1959) 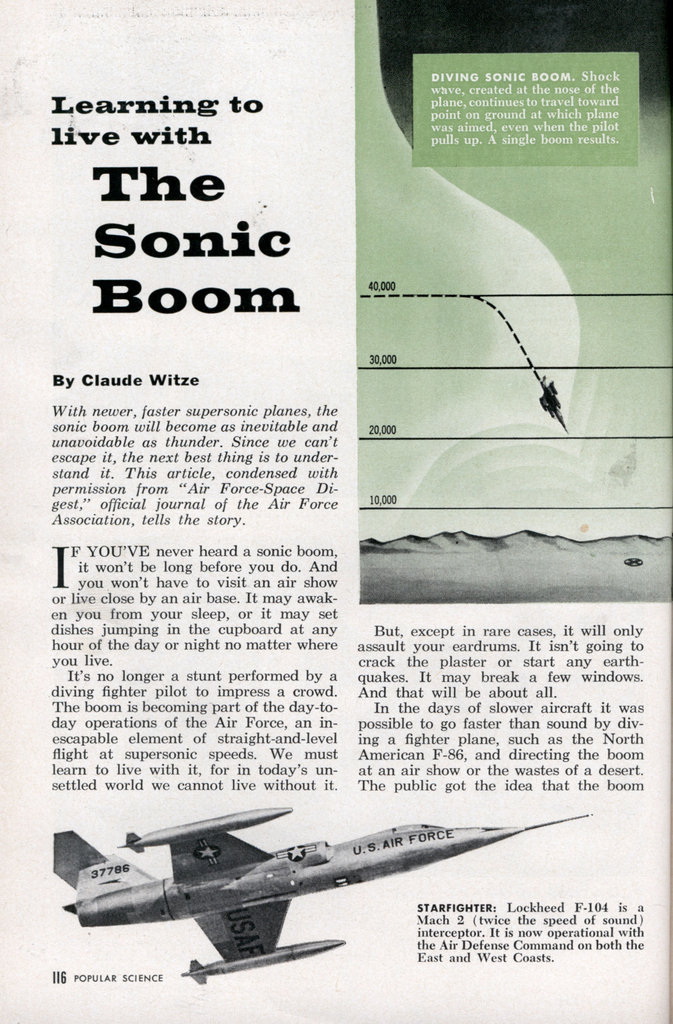 Learning to live with The Sonic Boom

With newer, faster supersonic planes, the sonic boom will become as inevitable and unavoidable as thunder. Since we can’t escape it, the next best thing is to understand it. This article, condensed with permission from “Air Force-Space Digest,” official journal of the Air Force Association, tells the story.

IF YOU’VE never heard a sonic boom, it won’t be long before you do. And you won’t have to visit an air show or live close by an air base. It may awaken you from your sleep, or it may set dishes jumping in the cupboard at any hour of the day or night no matter where you live.

It’s no longer a stunt performed by a diving fighter pilot to impress a crowd. The boom is becoming part of the day-to-day operations of the Air Force, an inescapable element of straight-and-level flight at supersonic speeds. We must learn to live with it, for in today’s unsettled world we cannot live without it.

But, except in rare cases, it will only assault your eardrums. It isn’t going to crack the plaster or start any earthquakes. It may break a few windows. And that will be about all.

In the days of slower aircraft it was possible to go faster than sound by diving a fighter plane, such as the North American F-86, and directing the boom at an air show or the wastes of a desert. The public got the idea that the boom was created as a single clap of thunder when the pilot passed through the “barrier” that faced him when he reached Mach 1, or the speed of sound. It was commonly believed that this was the end of the noise, that it would be heard again only if the plane slowed down to less than Mach 1 and then broke the barrier again.

The truth is that an aircraft capable of supersonic speed in straight-and-level flight creates a continuous sonic boom. It follows the flight path of the aircraft; if it were visible it would look like a cone—in fact, like two cones. One of them has its apex at the nose of the plane, the other at the tail. The cones are shock waves that travel to the ground at the speed of sound (about 762 m.p.h.).

The two shock cones are so ‘”lose they almost always sound like a single clap of thunder. If they were real claps of thunder they would impose a pressure of about one-half pound on each square foot of the earth or the obstacle in the way.

What is the pressure from a sonic boom?

Not more than five pounds per square foot—10 times that of a thunderclap, five times that in a boiler factory.

But the altitude of the plane, upward of 35,000 feet, and the loss of energy that muffles the shock on the way down, will keep the pressure below the five-pound level.

The strongest sonic-boom pressure ever recorded was 33 pounds per square foot, measured on a mountain top, with the aircraft only 280 feet away.

But when people hear a noise that is roughly 10 times as loud as a clap of thunder, they immediately start looking for damage.

In an area such as southern California, where as many as 90 supersonic aircraft may be in the air at a time, this leads to serious complications.

Under existing law, claims must be settled by the perpetrator: Air Force, Navy or manufacturer. But it is difficult in some cases to identify the airplane that broke a window.

Air Force general policy, followed in facing demands for payment, includes these considerations: • Plate and window glass may be broken by shock waves.

• Light bric-a-brac may be shaken or vibrated from shelves.

• Loosely latched doors may be pushed open and damaged.

• There is a possibility of aggravation of existing plaster cracks only when extensive damage is present.

• Structural damage to foundations and load-bearing walls is practically impossible.

• No sonic-boom pressure is strong enough to injure a person.

For the Air Force, the problem first got critical in the New England area when the Lockheed F-104 interceptors were made operational at Westover Air Force Base, in Massachusetts. There are other areas: central Ohio, the St. Louis region, central Texas, and southern California. All of them involve military bases and aircraft-manufacturing plants.

The biggest problem in 1959 is the Convair B-58 Hustler, our first supersonic bomber. So far, the B-58’s sins against the countryside have been minor —disturbances created at irregular intervals by test pilots. Before this year is over, however, the airplane will be operational with the Strategic Air Command and flying regular practice missions all over the United States.

Boom in your future. About 30 cities, many of them major metropolitan areas, will be used as targets in simulated bombing raids at supersonic speeds. It will not always be the same 30 cities. In most cases there will be ample notice to the public, via newspapers and radio.

Don’t get the idea that the boom problem is going to remain forever the charge of men in uniform. The nation’s airlines are giving it more and more attention as transport designers turn from their first subsonic jets to the idea of a Mach 2 or Mach 3 passenger liner.

The airline problem, however, is several years in the future. The military problem is here today.

Most of the people made unhappy by sonic booms have assumed that they are not necessary, are caused by aerial hot-rodders and clowns in cockpits.

Sonic booms are characteristic of supersonic missions flown for serious reasons. They are unavoidable. They are the Sound of Security.