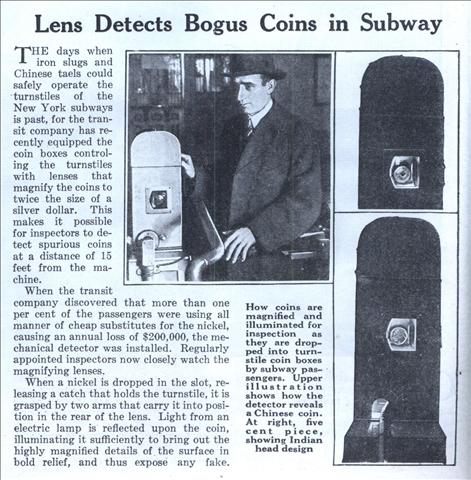 THE days when iron slugs and Chinese taels could safely operate the turnstiles of the New York subways is past, for the transit company has recently equipped the coin boxes controling the turnstiles with lenses that magnify the coins to twice the size of a silver dollar. This makes it possible for inspectors to detect spurious coins at a distance of 15 feet from the machine.

When the transit company discovered that more than one per cent of the passengers were using all manner of cheap substitutes for the nickel, causing an annual loss of $200,000, the mechanical detector was installed. Regularly appointed inspectors now closely watch the magnifying lenses.

When a nickel is dropped in the slot, releasing a catch that holds the turnstile, it is grasped by two arms that carry it into position in the rear of the lens. Light from an electric lamp is reflected upon the coin, illuminating it sufficiently to bring out the highly magnified details of the surface in bold relief, and thus expose any fake.