They really didn’t think these things out too well, did they? 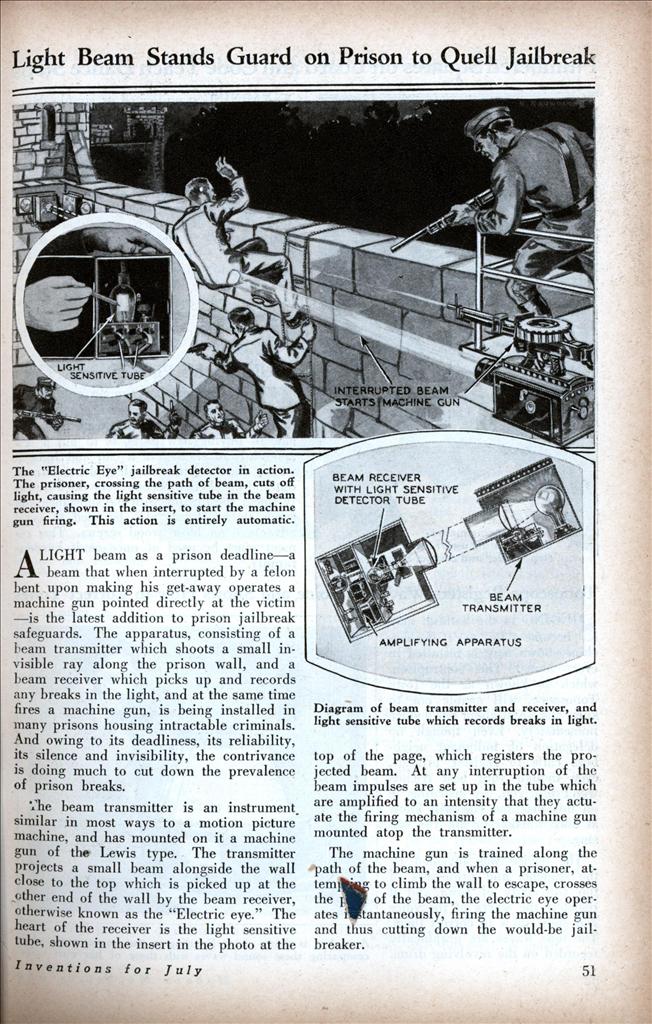 A LIGHT beam as a prison deadline—a beam that when interrupted by a felon bent upon making his get-away operates a machine gun pointed directly at the victim —is the latest addition to prison jailbreak safeguards. The apparatus, consisting of a beam transmitter which shoots a small invisible ray along the prison wall, and a beam receiver which picks up and records any breaks in the light, and at the same time fires a machine gun, is being installed in many prisons housing intractable criminals. And owing to its deadliness, its reliability, its silence and invisibility, the contrivance is doing much to cut down the prevalence of prison breaks.

The beam transmitter is an instrument, similar in most ways to a motion picture machine, and has mounted on it a machine gun of the Lewis type. The transmitter projects a small beam alongside the wall close to the top which is picked up at the other end of the wall by the beam receiver, otherwise known as the “Electric eye.” The heart of the receiver is the light sensitive lube, shown in the insert in the photo at the top of the page, which registers the projected beam. At any interruption of the beam impulses are set up in the tube which are amplified to an intensity that they actuate the firing mechanism of a machine gun mounted atop the transmitter.