Modern Mechanix
Issue: May, 1931
Posted in: Impractical
3 Comments on LIQUID AIR to RECLAIM LAND from NORTH SEA (May, 1931)

I’m pretty sure this was just designed by some time travelling Game of Thrones fan. 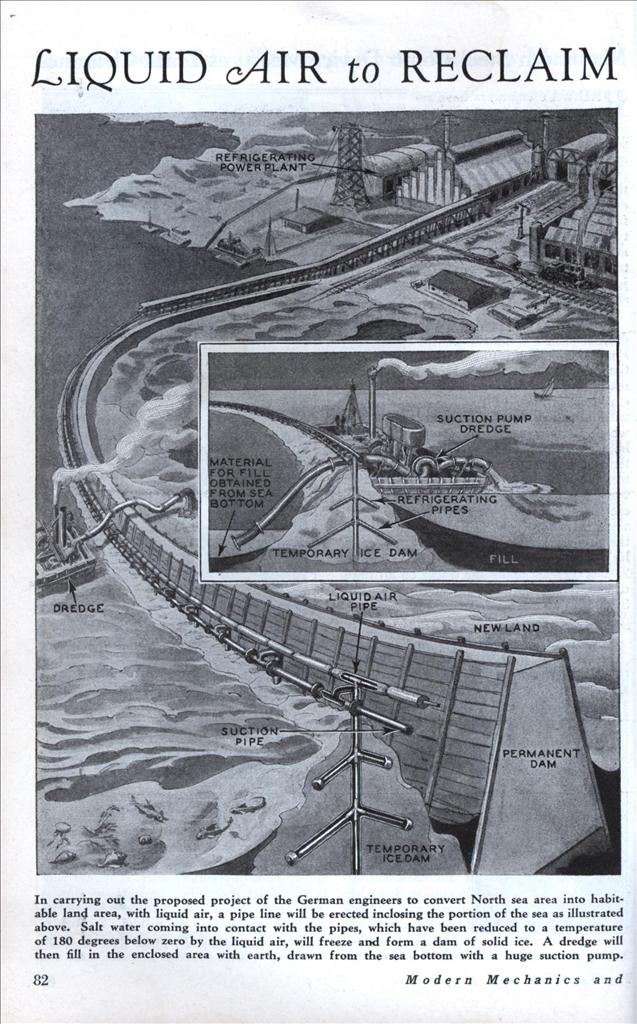 ONE of the most astounding engineering feats of recent years—that of building a wall of solid ice with liquid air around a large portion of the North Sea—is now under consideration by German engineers. Adding thousands of acres to the continent of Europe, the ice dam will serve as a breakwater to enable the engineers to construct a permanent inner dike of concrete, and then proceed to fill the inclosed space with earth sucked up by a dredge from the bottom of the sea outside the ice wall, as illustrated in the accompanying drawings.

Engineers will set about building the ice dam by erecting a pipe line out into the sea to carry liquid air, which will reduce the temperature of the pipes to approximately 180 degrees below zero. The sea water coming in contact with these pipes will congeal into ice, and the waves will then tend to form a solid ice wall to serve as a breakwater for the inclosed area.

This much accomplished, engineers will then build a permanent concrete dike inside the ice wall, and by means of a suction dredge fill in the reclaimed area with earth sucked up from the bottom of the sea outside the wall.

This project, if proven feasible in preliminary experiments, will first be carried out in the North sea, shown on the map above, where for centuries the Germans have been trying to win land from the ocean. Liquid air will be supplied by refrigerating plants on the shore, and the pipe line will extend out beyond Helgoland and back to the mouth of the Weser river.