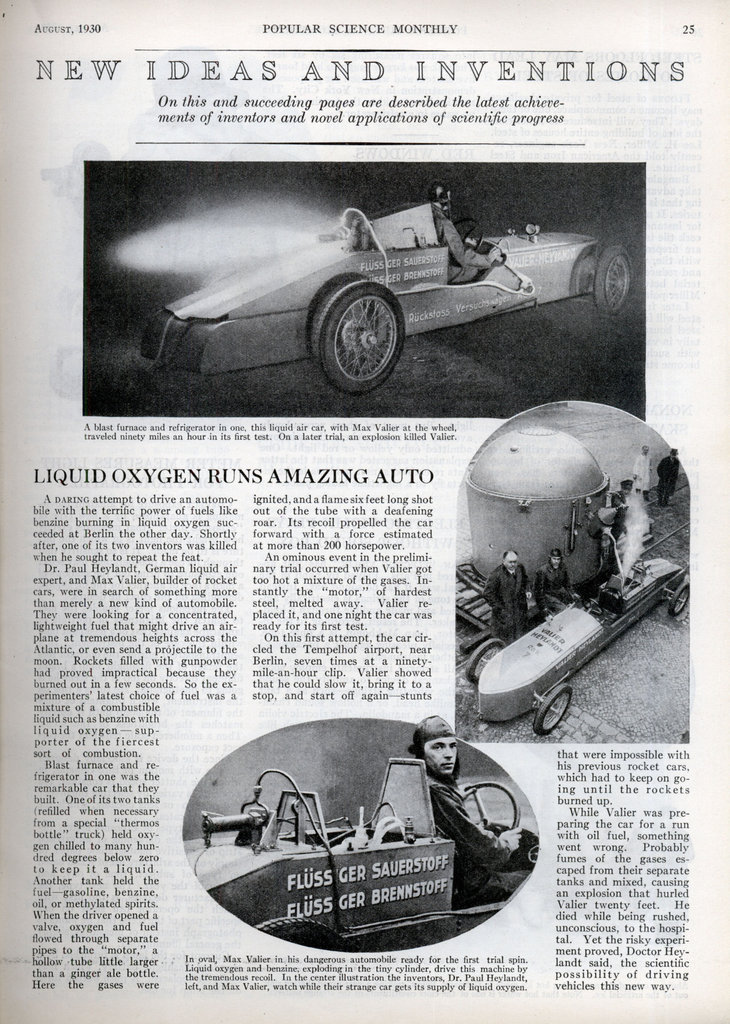 A daring attempt to drive an automobile with the terrific power of fuels like benzine burning in liquid oxygen succeeded at Berlin the other day. Shortly after, one of its two inventors was killed when he sought to repeat the feat.

Dr. Paul Heylandt, German liquid air expert, and Max Valier, builder of rocket cars, were in search of something more than merely a new kind of automobile. They were looking for a concentrated, lightweight fuel that might drive an airplane at tremendous heights across the Atlantic, or even send a projectile to the moon. Rockets filled with gunpowder had proved impractical because they burned out in a few seconds. So the experimenters’ latest choice of fuel was a mixture of a combustible liquid such as benzine with liquid oxygenâ€”supporter of the fiercest sort of combustion.

Blast furnace and refrigerator in one was the remarkable car that they built. One of its two tanks (refilled when necessary from a special “thermos bottle” truck) held oxygen chilled to many hundred degrees below zero to keep it a liquid. Another tank held the fuelâ€”gasoline, benzine, oil, or methylated spirits. When the driver opened a valve, oxygen and fuel flowed through separate pipes to the “motor,” a hollow tube little larger than a ginger ale bottle. Here the gases were ignited, and a flame six feet long shot out of the tube with a deafening roar. Its recoil propelled the car forward with a force estimated at more than 200 horsepower.

An ominous event in the preliminary trial occurred when Valier got too hot a mixture of the gases. Instantly the “motor,” of hardest steel, melted away. Valier replaced it, and one night the car was ready for its first test.

On this first attempt, the car circled the Tempelhof airport, near Berlin, seven times at a ninety-mile-an-hour clip. Valier showed that he could slow it, bring it to a stop, and start off againâ€”stunts that were impossible with his previous rocket cars, which had to keep on going until the rockets burned up.

While Valier was preparing the car for a run with oil fuel, something went wrong. Probably fumes of the gases escaped from their separate tanks and mixed, causing an explosion that hurled Valier twenty feet. He died while being rushed, unconscious, to the hospital. Yet the risky experiment proved, Doctor Heylandt said, the scientific possibility of driving vehicles this new way.