The used to recommend Listerine for everything. It reminds me of Chris Rock’s Robitussin routine 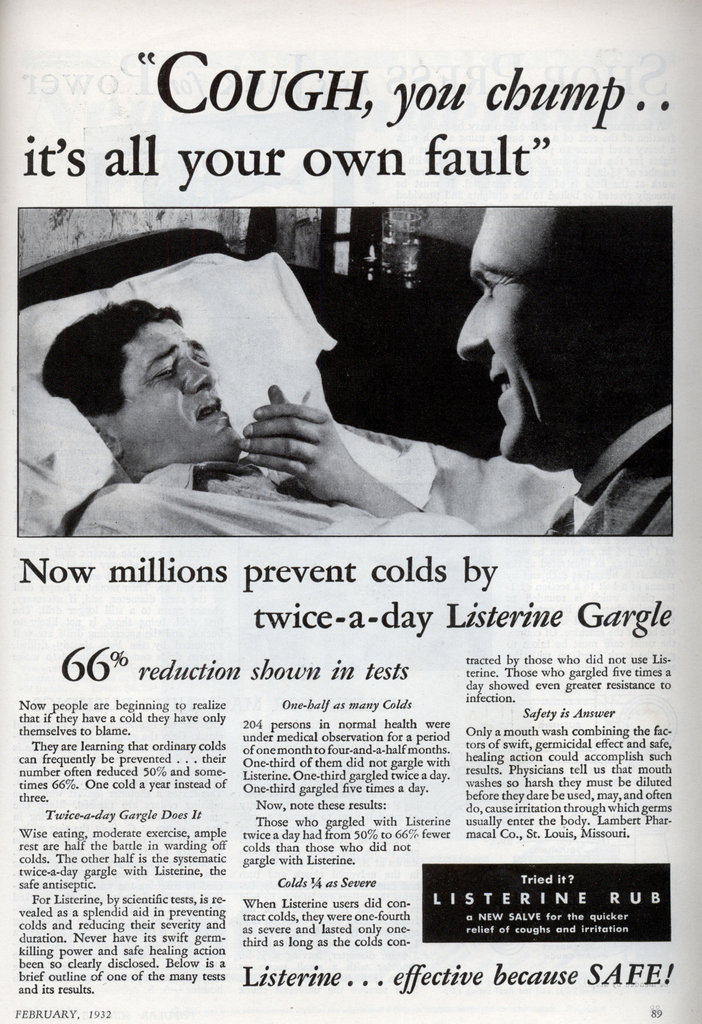 “COUGH, you chump.. it’s all your own fault”

Now people are beginning to realize that if they have a cold they have only themselves to blame.

They are learning that ordinary colds can frequently be prevented . . . their number often reduced 50% and sometimes 66%. One cold a year instead of three.

Twice-a-day Gargle Does It

Wise eating, moderate exercise, ample rest are half the battle in warding off colds. The other half is the systematic twice-a-day gargle with Listerine, the safe antiseptic.

For Listerine, by scientific tests, is revealed as a splendid aid in preventing colds and reducing their severity and duration. Never have its swift germ-killing power and safe healing action been so clearly disclosed. Below is a brief outline of one of the many tests and its results.

One-half as many Colds

When Listerine users did contract colds, they were one-fourth as severe and lasted only one-third as long as the colds contracted by those who did not use Listerine. Those who gargled five times a day showed even greater resistance to infection.

Only a mouth wash combining the factors of swift, germicidal effect and safe, healing action could accomplish such results. Physicians tell us that mouth washes so harsh they must be diluted before they dare be used, may, and often do, cause irritation through which germs usually enter the body. Lambert Pharmacal Co., St. Louis, Missouri.