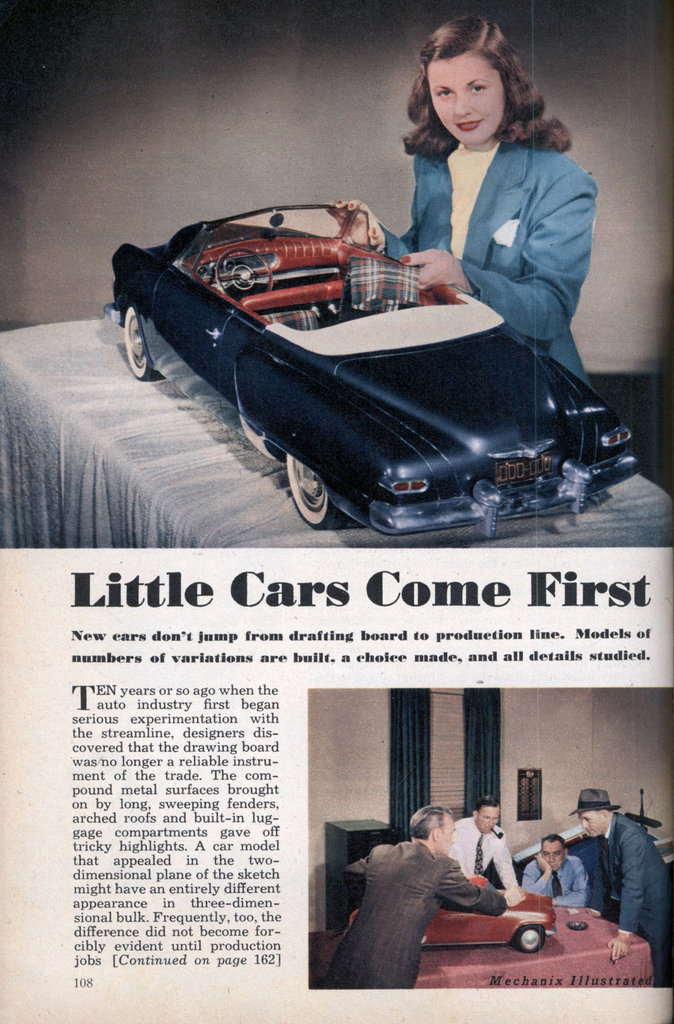 New cars don’t jump from drafting board to production line. Models of numbers of variations are built, a choice made, and all details studied.

TEN years or so ago when the auto industry first began serious experimentation with the streamline, designers discovered that the drawing board was no longer a reliable instrument of the trade. The compound metal surfaces brought on by long, sweeping fenders, arched roofs and built-in luggage compartments gave off tricky highlights. A car model that appealed in the two-dimensional plane of the sketch might have an entirely different appearance in three-dimensional bulk. Frequently, too, the difference did not become forcibly evident until production jobs were exposed to the critical lights of a salesroom.

To avoid these errors, the design phase of new automobiles gradually shifted from the pencil and brush to the spatula. Waist-high clay modeling platforms supplanted the drafting boards in studios. Instead of artwork, designers presented scale models of their fancies.

This does not mean that new automotive designs are today accepted from miniatures. The approval of a miniature is only one step in the development which leads to manufacturing. However, through wider use of miniatures, new car studios have been able to save considerable wasted time and expense between an original idea and the clay model.

The Studebaker Corporation found miniatures of particular help in deciding the major styling change involved in its new model. In collaboration with Raymond Loewy Associates, a dozen quarter-sized replicas of suggested models were completed. The one finally selected was, in the opinion of officials, so outstanding that only minor revisions were necessary in later full-sized clay and full-sized wood models.

In building a miniature model the professional automobile designer starts with a wooden “foundation car.” The foundation car has wheels mounted in quarter-sized relationship to the eventual full-sized model; otherwise the angular surfaces of the foundation bear scant resemblance to the flowing lines of the modern automobile.

The designer fills over the wooden car with plasticine, a type of modeling clay that is stored in 125-degree ovens and which solidifies at room temperature. Throughout the fill-in period the designer makes frequent recourse to a templet from which the general outline of an automobile has been cut. The templet, placed lengthwise of the model, tells him the absolute limits of his design.

Establishment of absolute limits for a model may not readily be appreciated by a layman unless he considers the production processes toward which every designer must work.

Overall lengths obviously affect the capacity of assembly lines. Car heights may not jibe with oven or conveyor clearances. Then, sizes have a bearing on costs.

The limitation between the foundation car and the inner rim of the templet is the true test of professional design skill. The space varies from a fraction of an inch to two inches. To achieve a striking effect and still satisfy economically the possibilities of the productive machinery of an automobile company is a problem considerably more complex than dreaming up a super-streamliner on a drafting board.