Modern Mechanix
Issue: Oct, 1932
Posted in: General, How to
Tags: skeptics
No Comments on Look Out for SWINDLERS Who Turn “SCIENTIFIC” (Oct, 1932) 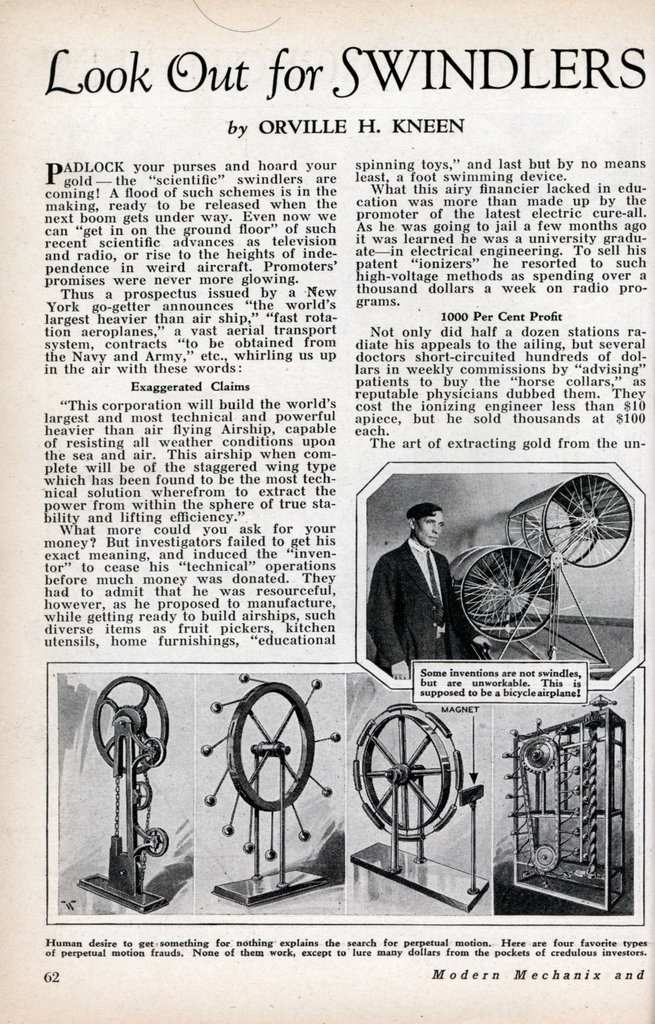 Look Out for SWINDLERS Who Turn “SCIENTIFIC”

New scientific discoveries â€” splitting the atom, cosmic rays, etc.â€”give the scientific swindler new tools to work with in luring dollars from the unwary. Some of the most famous mechanical swindles of today and of a generation ago are described in this article.

PADLOCK your purses and hoard your gold â€” the “scientific” swindlers are coining! A flood of such schemes is in the making, ready to be released when the next boom gets under way- Even now we can “get in on the ground floor” of such recent scientific advances as television and radio, or rise to the heights of independence in weird aircraft. Promoters’ promises were never more glowing.

Thus a prospectus issued by a New York go-getter announces “the world’s largest heavier than air ship,” “fast rotation aeroplanes,” a vast aerial transport system, contracts “to be obtained from the Navy and Army,” etc., whirling us up in the air with these words:

“This corporation will build the world’s largest and most technical and powerful heavier than air flying Airship, capable of resisting all weather conditions upon the sea and air. This airship when complete will be of the staggered wing type which has been found to be the most technical solution wherefrom to extract the Power from within the sphere of true stability and lifting efficiency.” What more could you ask for your money? But investigators failed to get his exact meaning, and induced the “inventor” to cease his “technical” operations before much money was donated. They had to admit that he was resourceful, however, as he proposed to manufacture, while getting ready to build airships, such diverse items as fruit pickers, kitchen utensils, home furnishings, “educational

spinning toys,” and last but by no means least, a foot swimming device.

What this airy financier lacked in education was more than made up by the promoter of the latest electric cure-all. As he was going to jail a few months ago it was learned he was a university graduateâ€”in electrical engineering. To sell his patent “ionizers” he resorted to such high-voltage methods as spending over a thousand dollars a week on radio programs.

Not only did half a dozen stations radiate his appeals to the ailing, but several doctors short-circuited hundreds of dollars in weekly commissions by “advising” patients to buy the “horse collars,” as reputable physicians dubbed them. They cost the ionizing engineer less than $10 apiece, but he sold thousands at $100 each.

The art of extracting gold from the un-

wary requires better technique from year to year. Thus back in 1880 electricity was known only in the laboratory, and almost anything would shock the pocket-book nerve. It was in that year that a certain “Professor” Wingard invented, or at least announced, probably the first of the numerous “death rays” which have wiped out so many bank accounts, if not cities.

From a safe distance the Professor shook scientific as well as naval circles, by blowing up the hulk of a schooner in

New Orleans Bay. He guarded his mysterious electrical apparatus night and day, and for two years perfected his annihilating invention. The end of all navies seemed in sight when he showed up in Boston and formed a stock company.

His first modest request was for a mere $1,800, wherewith to put on a demonstration. After convincing skeptical scientists and capitalists, millions would be his for the asking. The Professor installed his electrical outfit on a small steamer, in the deckhouse, and guarded it closely. Long before the day of wireless, he proposed to explode dynamite placed on the distant vessel, some miles away, by electrical emanations.

The experts and the inventor boarded the little steamer, while two men in a rowboat set out to place the dynamite in the old vessel. Suddenly a terrific but premature explosion shook the bay, and especially the Professor. He called off the demonstration, but nothing was suspected

until the rowboat and the two mangled bodies were inspected.

A long rope finally gave the Professor away. He admitted that his scheme was nothing more than having the men attach the rope as they placed the dynamite. He exploded it by pulling on the rope. While not very ingenious, as such inventions go today, it would have blasted open many a bank account if the dynamite had been more carefully handled.

The teletypesetter will set type in any number of offices at the same time. The teletypewriter enables us to type our own messages in distant offices. Typed messages can be sent by radioâ€”a device which stocketeers could use in place of long-distance, with which they now telephone from New York to San Francisco, if necessary, to hook a customer for a new offering.

Swindlers seem to be outclassed when a real machine is produced, as it was recently, whereby specially-typed copy is read by an electric eye, and is then set up in type without human hands. Another device is the talkie-typesetter, which makes a film when copy is read into it, and then sets the type.

But an ingenious promoter has put all these machine age marvels in the shade. Realizing how many business men yearn for an errorless typewriter, able to tap out letters all day and night, at top speed and without even time out for lunch or nose-powdering, he developed just such an Iron Tillie. He may have heard of just such a machine actually built, which did take dictation and deliver finished letters.

But whereas this machine could only spell cat with a “k,” for example, the promoter’s perfect automatic typewriter came through with the correct “c”! As he or the prospective investor talked into it, rods and wires and gadgets humped themselves, electrical contacts flashed and snapped and buzzed. In a few moments the copy slid outâ€”letter-perfect.

Secret of the Fraud

Here was the greatest invention of the age! Investors planked down their money for stock, to get in on the ground floor. But detectives from the Better Business Bureau, while the inventor was absent, went down lower yetâ€”to the basement. There they discovered a rapid typist, with a microphone strapped to her head. Whenever she struck a key, it worked another upstairs. The arrangement, while of some advantage in removing too-attractive stenos from the sight of tired business men, was not considered a real investment. The promoter vanished, as did the investments.

Think of the millions made by those who invested in Ford cars! Or radio! Get in on short-wave ground floors, or a super-something! Promoters find that electric waves are very effective energizers of the pocket-book nerve. Thus we all know of radio being used to control battleships, submarines, even airplanes and aerial torpedoes. What more logical, then, than a radio-controlled automobile?

Such cars have been demonstrated, but no one knows a use for them, unless perhaps for bloodless wars, in which radio-operated machines charge each other whiie the armies camp safely behind, with the generals. But a glib promoter found a very practical use for such a machine recently, in a Middle Western city.

He invited prominent and well-heeled citizens to ride in a car with himself. Ahead of them a driverless automobile, with mysterious doo-dads under the hood and elsewhere, threaded its way through the traffic. Invisible waves, sent out from their own car by the promoter, seemed to direct the leading car unerringly. Much impressed, the citizens invested heavily in this “latest achievement of science.”

But investigators from the local Better Business Bureau failed to see what the thing was good for, except perhaps as a new alibi for running past a red light. When the promoter was busy promoting subscriptions they poked around the apparatus which filled the radio-car. And under the front seat they found a small chap, perfectly willing to be uncomfortable in the cause of science and finance. He was able to guide the car as required, and thus the radio-car was very simple in operation. But the stock went off the market.

Swindlers have a great variety of scientific wonders with which to work today. X-rays, ultraviolet rays, electric and magnetic and short waves, atomic and radioactive, high tension and high pressure and high frequency, sounds we cannot hear and light we cannot see. We are in exactly the right state of mind for picking. New devices are being invented for our benefit, while tried-and-true frauds like perpetual motion and gold-from-seawater are being scientifically refurbished.

A Kansas farmer (not one of those in need of farm relief) was informed not long ago that his farm held a fortune in buried Indian treasure. Oddly enough, the stranger knew precisely how much there was, and to locate the $475,000 exactly he produced a unique scientific instrument.

All the fortunate farmer had to do was to turn over $4,000 to the stranger. His device would magnetize it, by a secret process, and its magnetic properties would at

once locate the hidden fortune. The whole thing was amazingly simpleâ€”especially in view of the treasure-hunter’s willingness to donate the lion’s share to the farmer, when he could just as well have hogged it all himself.

The farmer raised the $4,000 by a mortgage, and turned it over to be magnetized. Then the stranger made himself invisible, also by a secret process. But something went wrong, and he failed to disappear completely and suddenly enough. So he landed in the county hoosgow.

This kind of treasure finding, to be successful, requires attention to all such details. Nothing is so important to the scientific swindler as the final fade-out at the psychological moment.