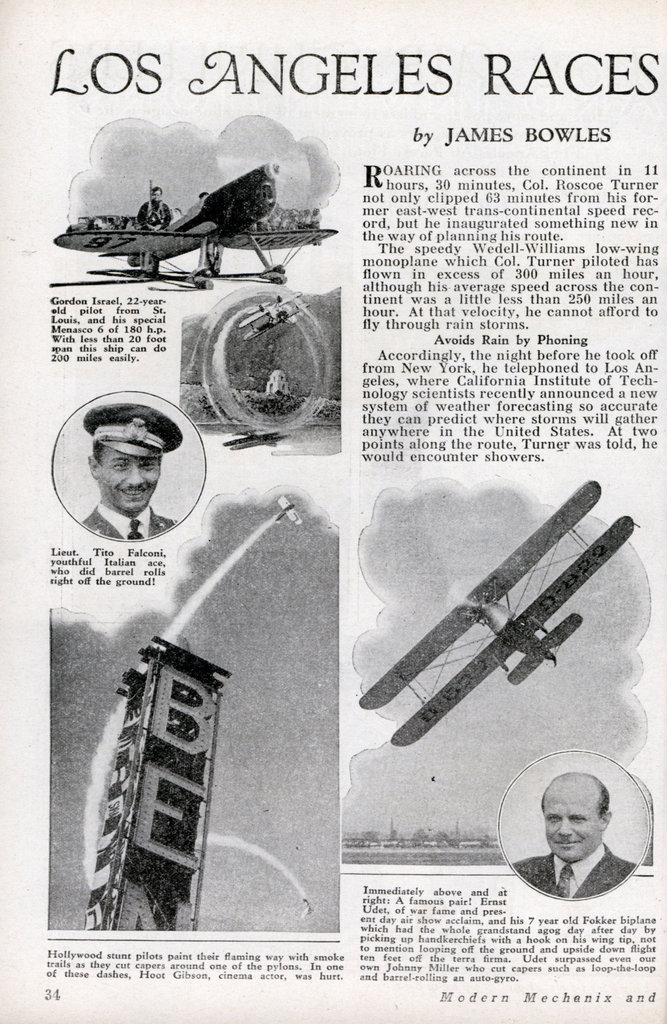 LOS ANGELES RACES Prove Air THRILLERS
More and more power and less refinement of streamline design is the cry of present day designers as proved by contesting planes in great 1933 Los Angeles Air Races. Flown across country by an eye witness this up-to-the-minute account of the past year’s aviation progress summarizes records, achievements and points out the races’ thrills.

ROARING across the continent in 11 hours, 30 minutes, Col. Roscoe Turner not only clipped 63 minutes from his former east-west trans-continental speed record, but he inaugurated something new in the way of planning his route.

The speedy Wedell-Williams low-wing monoplane which Col. Turner piloted has flown in excess of 300 miles an hour, although his average speed across the continent was a little less than 250 miles an hour. At that velocity, he cannot afford to fly through rain storms.

Avoids Rain by Phoning Accordingly, the night before he took off from New York, he telephoned to Los Angeles, where California Institute of Technology scientists recently announced a new system of weather forecasting so accurate they can predict where storms will gather anywhere in the United States. At two points along the route, Turner was told, he would encounter showers.

Although he was instructed to turn slightly south from his course between two of his stopping points, Col. Turner added the extra miles for safety and slid down to a three-point landing early in the afternoon, a half hour ahead of his nearest competitor, Jimmie Wedell.

Increases in Power This year’s races saw more power pouring from the already powerful engines used in the tiny racers. Last year Maj. Jimmie Doolittle won the Thompson 100-mile dash with a 750-horsepower engine pulling his monoplane through the air at Cleveland. This year, Col. Turner won the same epic event with the engine “souped up” to nearly 1,000 horsepower!

True, Col. Turner did not reach the speed attained by Doolittle, for fairly heavy cross-winds impeded the racers at Los Angeles. But the increased power indicates the trend in racing. More power instead of more streamlining. The blunt-nosed fuselage has been accepted as the prevailing style for the larger planes, though some of the smaller ships still make use of water-cooled engines, with consequent frontal area. Despite the cross winds, Col. Turner won the Thompson trophy at an average speed of 241.051 miles an hour, as compared with Doolittle’s 252.686.

With the same plane Turner made a dramatic futile effort to establish a new world’s land plane record, but a combination of factors, including fog at one end of his course, beat him back to an average speed of 280 miles an hour.

The small planes, on the other hand, are getting smaller. Several which had appeared in former air races were even tinier. S. J. Wittman, of Oshkosh, Wis., 3ew his tiny ship, “Clipper,” across the continent without altimeter or compass. But note: whereas the wing spread first was 20 feet, he remodeled the plane with a 17-foot wing, while the current model boasts a spread of only 14 ft., 6 in. Every year he “clips” two feet off the wing!

These babes of the air come in two classes, 375 cubic inch piston displacement and 550 inch displacement. They attain speeds up above 200 miles an hour. They land sometimes in excess of 100 miles an hour on wheels hardly larger than your hand. They buzz like bees in the air, yet the pilots “polished” the pylons so closely as they made vertical turns that the casual observer must have thought they’d collapse in the air.

As the planes flashed across start and finish lines, “two-eyed” cameras recorded their times and positionsâ€”within an accuracy of 1/1000 of a second and a fraction of an inch. These cameras have settled many disputes and have come to be a necessary part of judging finishes.

Advent of Low-wing Popularity This year’s races were marked by the almost total absence of biplanes and high-wing monoplanes. All the racers preferred low-wing ships, since they have been found more stable and easier to handle at high speeds. So well did they handle, in fact, that the four days of racing were completed without incident, excepting a “stunt” race between two motion picture actors flying fairly slow biplanes. “Hoot” Gibson plunged into the earth after a turn around a pylon because his experience was not adequate to permit him to carry the ship through quick maneuvers. He was not seriously hurt. Russell Boardman, who crashed in taking off at Indianapolis during the Bendix dash, died from his injuries.

European Wizards at Controls These European wizards of the air displayed a prowess few in America have seen. Maj. Udet, particularly, demonstrated the ingenuity Germany has shown in developing aeronautics despite the bans of the Versailles peace treaty. He flew his seven-year-old Fokker biplane, powered by a 150-horsepower Siemens motorâ€”considered by American speed pilots to be something akin to a toyâ€”with such skill and daring that a tremendous tribute was paid him.

Imagine, for instance, pulling the ship up into a whipstallâ€”straight up until the engine pulls the plane downâ€”only 300 feet above the grandstands; looping the loop with the engine shut off; picking up a handkerchief from the ground with a hook tied to one wing!; barrel-rolling from the ground.

Or picture 120-pound Falconi, picked from 400 pilots to represent Italy, roaring down and up in an outside loop, passing within 100 feet of the earth; flying along the ground with his wings vertical, held aloft only by his 400-horse-power engine; climbing straight up hundreds of feet, pulled aloft by his powerful motor.

Two pictures of European aviation since the warâ€”the vanquished and victor! Stunting, true: but typical of progress in those countries. Loops Auto-Gyro When the crowds tired of thrilling at these hair-raising episodes, they watched Lt. Johnny Miller loop-the-loop in his auto-gyro. Here was something brand new for National Air Racers, yet the flying windmill looped, whip-stalled and performed wing-overs with the same ease as an airplane.

I have seen many parachute stunts, including delayed openings, or free-falls; which means that the jumper “bails out” and drops a long distance before pulling the rip cord. “Spud” Manning, a jumper of long experience, made even old-timers gasp when they strained their eyes up at the same auto-gyro and saw the tiny jumper leap overboard at an altitude of nearly 15,000 feet. Manning added a touch of stellar showmanship as he fed into the open air wisps of white smoke â€”really flourâ€”the while he twisted and turned on his earthward plunge.

Manning Has a Real Thrill Stunt Down through the sky the floury trail marked his course, though few could see his body as it hurtled downward. After a time the flour was exhausted, the trail disappeared. Then, a mile below the last white puff, the billowing silken canopy snapped open; but not even yet was he safe, for he was suspended beneath a ‘chute only 24 feet in diameter. To break his fall further, when a thousand feet above the field, the jumper jerked a second rip cord, and another parachute flew out to slow him down to a safe landing.

National Air Races are the crucible in which manufacturers and individuals who think they can build faster airplanes test their products. Here the little fellow gets his chance. Wedell built Turner’s plane and saw Turner outrace him in the two feature eventsâ€”but he had the satisfaction of knowing he had been defeated by his own handiwork in which an engine of fully 200 more horsepower had been installed.