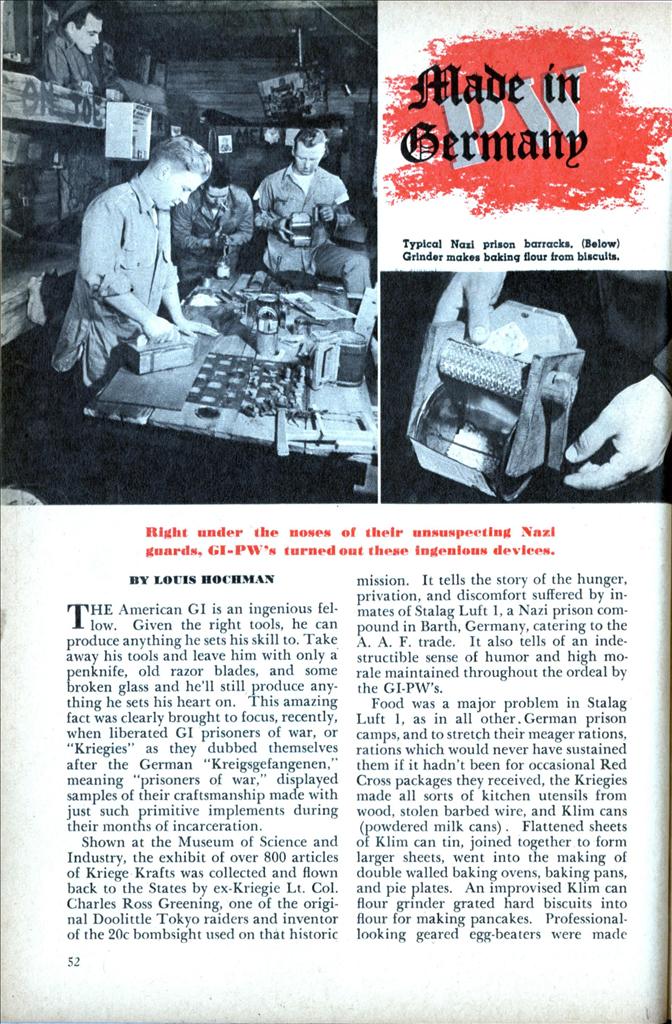 Right under the noses of their unsuspecting Nazi guards, GI-PW’s turned out these ingenious devices.

THE American Gl is an ingenious fellow. Given the right tools, he can produce anything he sets his skill to. Take away his tools and leave him with only a penknife, old razor blades, and some broken glass and he’ll still produce anything he sets his heart on. This amazing fact was clearly brought to focus, recently, when liberated Gl prisoners of war, or “Kriegies” as they dubbed themselves after the German “Kreigsgefangenen,” meaning “prisoners of war,” displayed samples of their craftsmanship made with just such primitive implements during their months of incarceration.

Shown at the Museum of Science and Industry, the exhibit of over 800 articles of Kriege Krafts was collected and flown back to the States by ex-Kriegie Lt. Col. Charles Ross Greening, one of the original Doolittle Tokyo raiders and inventor of the 20c bombsight used on that historic mission. It tells the story of the hunger, privation, and discomfort suffered by inmates of Stalag Luft 1, a Nazi prison compound in Barth, Germany, catering to the A. A. F. trade. It also tells of an indestructible sense of humor and high morale maintained throughout the ordeal by the GI-PW’s.

Food was a major problem in Stalag Luft 1, as in all other German prison camps, and to stretch their meager rations, rations which would never have sustained them if it hadn’t been for occasional Red Cross packages they received, the Kriegies made all sorts of kitchen utensils from wood, stolen barbed wire, and Klim cans (j)owdered milk cans). Flattened sheets of Klim can tin, joined together to form larger sheets, went into the making of double walled baking ovens, baking pans, and pie plates. An improvised Klim can flour grinder grated hard biscuits into flour for making pancakes. Professional-looking geared egg-beaters were made from tin and wood. Geared and belt driven turbo-superchargers (blowers) were made to create a forced draft through the German stoves in order to burn the cheap coke provided by the Krauts.

To augment their supply of workshop tools, they converted table knives into saws by filing teeth into them. Teeth filed into strips of tin which were stretched on wooden frames and tightened by shoestring tourniquets also made efficient saws. Door knobs attached to wooden handles became hammers. Heavy flat iron bars removed from German stove door latches were handy for flattening and shaping tin. To attain a smooth finish on wooden surfaces, they used broken glass and sand.

Since the possession of tools was punishable by solitary confinement, the Kriegies posted guards around the barracks to warn of approaching Nazis. A nosey Nazi immediately touched off the warning cry, “Goon, coming up!” and all tools went into hiding. The Nazis never caught on.

Next to food, escape was the top topic at Stalag Luft 1, and the engineering that went into this vital and dangerous enterprise still staggers the imagination. With tin can shovels and bellows-powered forced ventilation through tin can pipes, the Kriegies burrowed through the earth in attempts to tunnel their way to freedom. Most ingenious and successful of these attempts was a tunnel which started its horizontal journey 40 feet below the earth’s surface. Hundreds of prisoners worked a year to complete the tunnel which boasted a Kriegie constructed elevator shaft and an improvised railroad for dirt disposal. Sixty British airmen escaped through it. Another record-breaking tunnel ran 350 feet below the Fatherland before the Nazis discovered it. To foil tunneling attempts, German guards sent their “Hundfuhrers,” dogs trained to ferret out tunnels by digging wherever they sniffed fresh dirt, into the compound. The resourceful Kriegies, however, soon put a sneezing stop to these measures by sprinkling pepper around the tunnel sites.

Dirt disposal, a top priority problem in tunnel digging, was solved by passing the tin cans of dirt to a Kriegie in the barracks rafters who dumped the dirt in the space between the ceiling and the barracks roof. Eventually, the dirt became so heavy that the ceilings sagged under the loads and in one barracks room, two stomping Nazis on a tunnel hunt came to sudden grief when the ceiling gave way overhead, sending two very much surprised Nazis to the hospital.

That these PW’s never lost their sense of humor is evident in many items they made during their imprisonment. A modernized chess set, carved from a broom handle, consisted of outhouses for pawns, toilets for castles, and a nude couple for the king and queen. The horses were represented only by their posterior portions. One Gl, who made a very efficient, tin-lined mousetrap from a Red Cross carton, kept score of the mice it caught by-painting swastikas on the trap for each one. Another elaborate affair gave the mouse a sporting chance. It consisted of a Chinese maze of twelve tin can cells connected by tin corridors. Six of the cells contained death-dealing devices: one, a hangman’s noose; another, a weighted bludgeon; the third, a spiked board; the fourth, poison; the fifth, a guillotine; and the last, solitary confinement. If the mouse chose the right corridor at each fork in the road, he passed through the other six cells to freedom. It took our GI’s to build a better mousetrap.