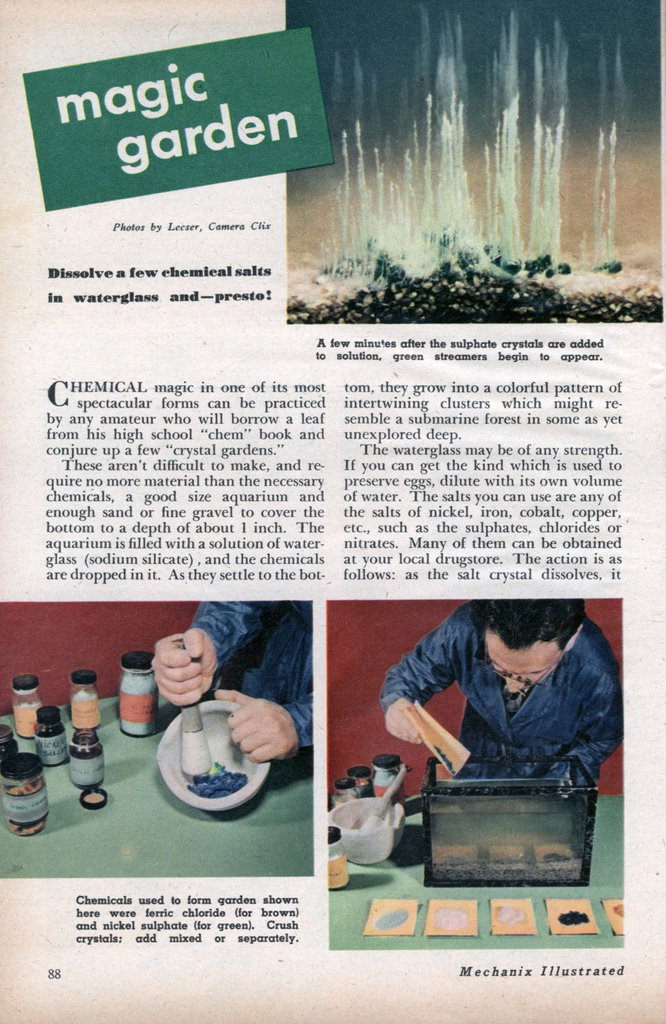 CHEMICAL magic in one of its most spectacular forms can be practiced by any amateur who will borrow a leaf from his high school “chem” book and conjure up a few “crystal gardens.”

These aren’t difficult to make, and require no more material than the necessary chemicals, a good size aquarium and enough sand or fine gravel to cover the bottom to a depth of about 1 inch. The aquarium is filled with a solution of water-glass (sodium silicate), and the chemicals are dropped in it. As they settle to the bottom, they grow into a colorful pattern of intertwining clusters which might resemble a submarine forest in some as yet unexplored deep.

The waterglass may be of any strength. If you can get the kind which is used to preserve eggs, dilute with its own volume of water. The salts you can use are any of the salts of nickel, iron, cobalt, copper, etc., such as the sulphates, chlorides or nitrates. Many of them can be obtained at your local drugstore. The action is as follows: as the salt crystal dissolves, it forms a silicate of the original metal. By osmosis, this compound keeps absorbing the water from the waterglass and swells up, increasing in size until the entire salt has been changed into the silicate. This latter is the material of which your magic garden is composed.

No two gardens are alike, as the growth shape of the silicates depends upon their internal structure. The suggested chemicals need not be used singly, but may be added to the solution separately or in a mixture to form color combinations. The average time to grow is about one-half hour, but frequently a garden will keep on growing almost indefinitely until it threatens to fill the entire aquarium. Sometimes, when observed under a high-power magnifying glass, the actual expansion of the silicate can be noticed.

For best results, use chemicals sparingly; avoid excess quantities which cause nothing more than a jumble of color. Be sure not to disturb your garden during or after growth. Interesting results can be obtained by ”growing” a number of small colored gardens in tall glasses for shelf ornaments.