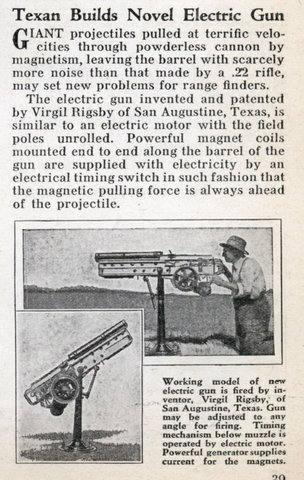 GIANT projectiles pulled at terrific velocities through powderless cannon by magnetism, leaving the barrel with scarcely more noise than that made by a .22 rifle, may set new problems for range finders.
The electric gun invented and patented by Virgil Rigsby of San Augustine, Texas, is similar to an electric motor with the field poles unrolled. Powerful magnet coils mounted end to end along the barrel of the gun are supplied with electricity by an electrical timing switch in such fashion that the magnetic pulling force is always ahead of the projectile.