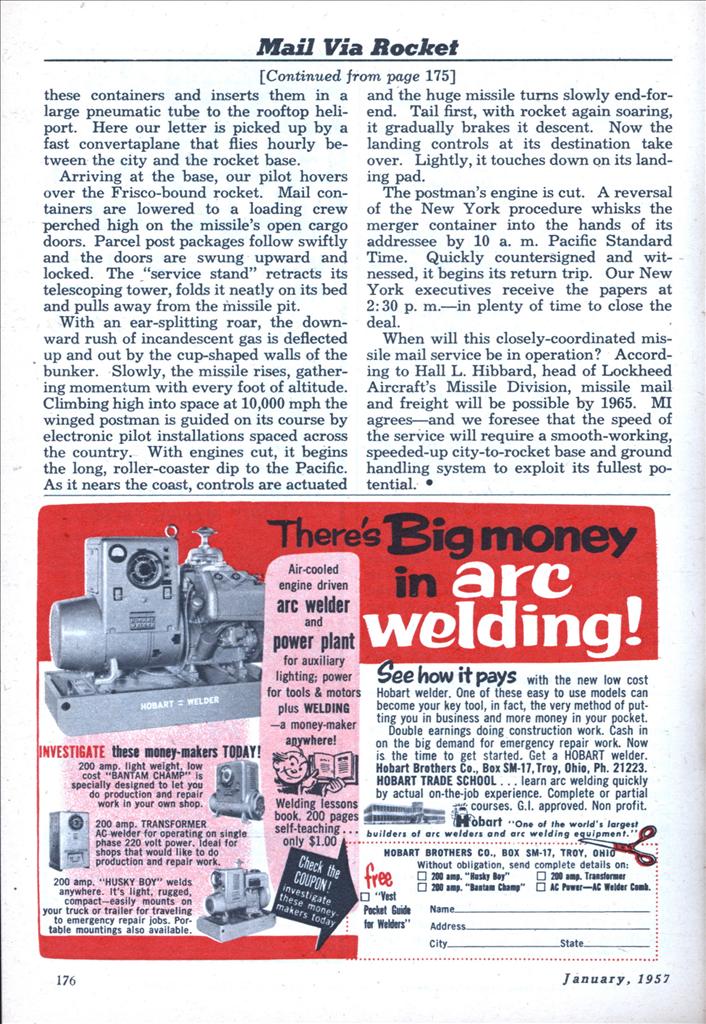 A missile expert predicts rocket mail by 1965. Here are MI’s ideas on how the system could function.

IT’S Friday noon. In the home office of a giant New York corporation the final drafts of a secret merger are being signed. If they can be signed by the party of the second part in San Francisco and be back here in the office before the stock market closesâ€”so that “buy” orders can be rushed to dealers throughout the countryâ€”a possible Monday financial slump can be averted. The atmosphere is tense. A micro- photo machine has been moved into the president’s office and a trusted operator inserts the sheets, one by one. Two tiny prints of each emerge, one for the files and one for mailing. The latter is sealed in a pencil-thin plastic carrier bearing the written address and the code punch for San Francisco. The carrier is then popped into a pneumatic tube that takes it to a central post office where it emerges into a sorting machine. Automatically identifying the punch mark, this device drops it into the San Francisco container. At scheduled intervals, an attendant seals these containers and inserts them in a large pneumatic tube to the rooftop heliport. Here our letter is picked up by a fast convertaplane that flies hourly between the city and the rocket base.

Arriving at the base, our pilot hovers over the Frisco-bound rocket. Mail containers are lowered to a loading crew perched high on the missile’s open cargo doors. Parcel post packages follow swiftly and the doors are swung upward and locked. The “service stand” retracts its telescoping tower, folds it neatly on its bed and pulls away from the missile pit.

With an ear-splitting roar, the downward rush of incandescent gas is deflected up and out by the cup-shaped walls of the bunker. Slowly, the missile rises, gathering momentum with every foot of altitude. Climbing high into space at 10,000 mph the winged postman is guided on its course by electronic pilot installations spaced across the country. With engines cut, it begins the long, roller-coaster dip to the Pacific. As it nears the coast, controls are actuated and the huge missile turns slowly end-for-end. Tail first, with rocket again soaring, it gradually brakes it descent. Now the landing controls at its destination take over. Lightly, it touches down on its landing pad.

The postman’s engine is cut. A reversal of the New York procedure whisks the merger container into the hands of its addressee by 10 a. m. Pacific Standard Time. Quickly countersigned and witnessed, it begins its return trip. Our New York executives receive the papers at 2:30 p.m.â€”in plenty of time to close the deal.

When will this closely-coordinated missile mail service be in operation? According to Hall L. Hibbard, head of Lockheed Aircraft’s Missile Division, missile mail and freight will be possible by 1965. MI agreesâ€”and we foresee that the speed of the service will require a smooth-working, speeded-up city-to-rocket base and ground handling system to exploit its fullest potential.